Clash Royale Chests: What are they?

Chests in Clash Royale are probably the # 1 way you get cards in Clash Royale. Considering that basically the only way to upgrade your units is to collect cards, chests are SUPER important.

Chests tend to contain a number of cards, with the card count depending on the rarity of the chest. In addition to unit cards, chests in Clash Royale can also contain resources like gold and gems.

Clash Royale Chests: What types are there?

There are four major types of chests in Clash Royale:

Let's take each one of these Clash Royale chests individually and figure out the best strategies surrounding them.

The Crown Chest is the first type of chest we'll tackle. The Crown Chest can only be unlocked once per day, and usually contains some pretty decent loot. In order to open the crown chest, you've got to earn... wait for it... crowns! (duh)

Pro Tip The next Crown Chest countdown starts when you earn your first crown towards your current chest. Thus, you should try to get at LEAST one crown ASAP after the timer runs out. That way, even if you can't get all 10 immediately, you can still shorten your wait for the next one!

Pro Tip You don't have to win in order to get crowns - if you lose a match but score a couple of crowns, those crowns still count! If you're going for the Clash Royale crown chest, don't give up!

Pro Tip You might think that there's no point to battling after you've earned your Crown Chest for the day, and after your Win Chests are full. Not so! If you think you can push up to another arena rank (especially in the early game), it's worth it to push for trophies. Your improved chest loot will be your reward!

These Clash Royale chests are earned after every win, and they fit in the four slots at the bottom of the screen. There are several ranks of chest, from the lowly silver up to the grand "super magical."

Pro Tip It's believed that these chests drop in a predetermined order - it's not random, everyone gets them on the same cycle. This might be true, it might not, and SuperCell can always change it if they want.

Clash Royale Calculator We have a Victory Chest Calculator that will tell you where you are in the order, and what chests to expect next! Check it out and give it a bookmark to track your Victory Chests!

Chances are you'll fill these slots pretty fast, because it takes real world time to unlock these chests. The lowest level silver chest takes 3 hours, the gold ones take 8, magical chests take 12 hours, and so on.

Pro Tip Try to resist the urge to skip these timers with gems. Yes, they stink. Yes, you're going to want that phat l00t quicker. However, unless you're spending hundreds or thousands of real dollars on gems, your gems are better spent on gold - gold that can upgrade your cards and buy new ones directly in the shop.

Pro Tip If you can, play smart and use these different time requirements to your advantage. For instance, if you're going to sleep, now's a good time to boot Clash Royale and start an 8 or 12 hour chest. Going to work or school? You might hit a silver chest and then check back at lunchtime.

The loot in these win chests is tied to your Clash Royale arena rank when you win them. This rank is shown at the bottom of the chest's icon. The higher the rank, the better the cards that drop are!

If you've got a unit that unlocked at a lower arena rank, you can still get cards for that unit at a higher arena rank. However, they're less likely (owing to there being more cards to choose from), so if you're just addicted to that Giant, you might consider dropping down to Arena Rank 1 to get more cards. However, bear in mind that you'll probably get worse loot overall down there, and the shop will eventually sell the cards you need anyhow.

Ah, the free chest. Most of the time in a Supercell game, you'd have to Google "Clash Royale hacks" to get anything for free. Not so in Clash Royale.

The free chest unlocks every four hours, and up to two can stack. The timer is only running on the Clash Royale free chest whenever there's an empty chest slot.

There's basically little to no strategy here. Just check in every 4 to 8 hours, and collect your freebies. No doubt if you're a Clash Royale addict, you're going to be checking in far more frequently than that.

The free chest has the worst loot overall of any of the other chests. But hey, it's free. Don't look a gift Clash Royale chest in the mouth!

These are the final type of chest in my Clash Royale chests guide. These chests can be bought in the market for obscene amounts of gems. At least they unlock immediately, right? 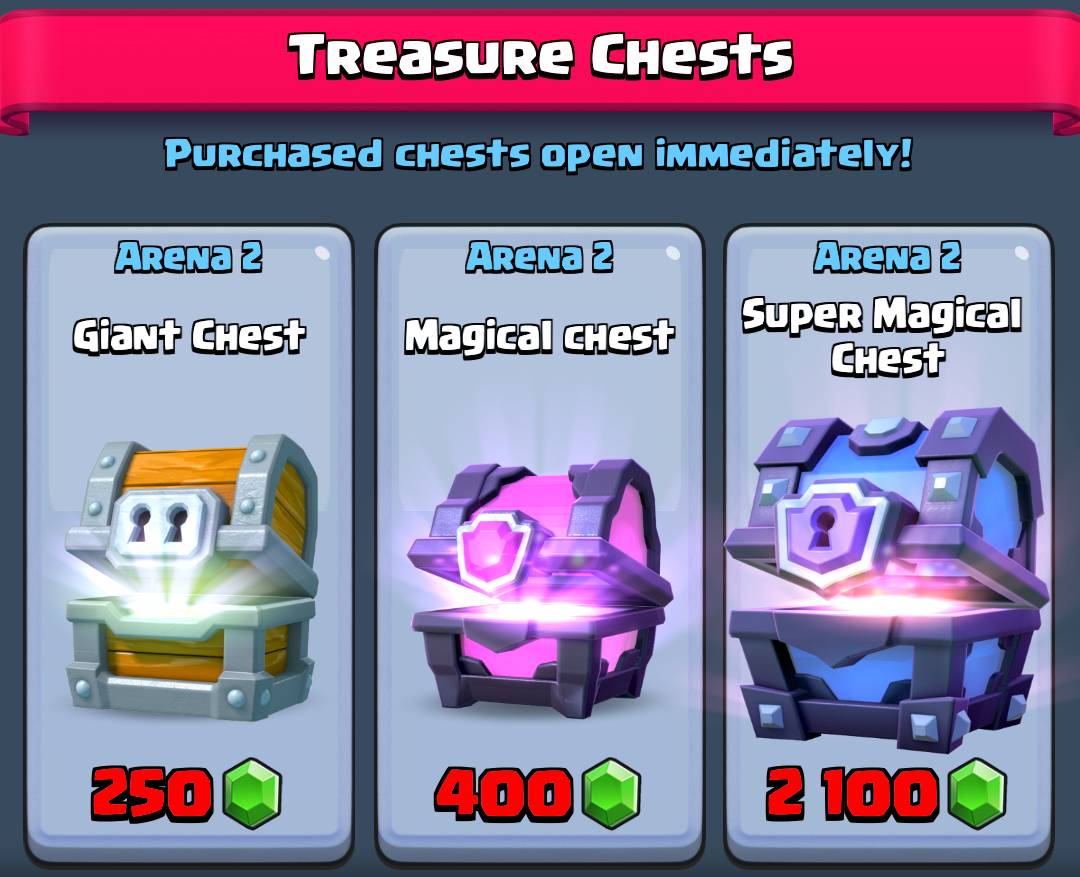 The problem with these chests is they're not particularly cost effective. The cost in gems of buying the chest is often a waste.

You have two choices when it comes to spending gems and getting cards. Think about it this way:

For option 1, you get to pick the cards you want, although you'll have to wait for the shop to stock what you're looking for. The cost of each card in Clash Royale varies, but in general it's pretty inexpensive to get cards at the lower levels. You can get a guaranteed epic for 2,000 gold, for instance.

For option 2, you have to roll the dice on a given chest and hope it contains cards you want. The gold value of those cards is typically less than the gold value of your gems, too.

When you start getting to the mega high card ranks, the gem chests start to make more sense. But for new players? Guys, save your Clash Royale gems and buy gold with them. You're getting the better end of the deal!

That's it for my Clash Royale chests guide. No doubt some of you Clash Royale pros reading this article know something I don't. I strive to have the best Clash Royale chest guide on the planet, so if you leave me a comment I'll make sure to incorporate your ideas and give credit where due.

Thanks guys, and keep on clashing!