Two Dots Level 102 is so hard. I spent an absolute ton of lives on it, and I had nearly convinced myself it was impossible when I finally cracked the code to beating it. Make no mistake, it remains the hardest level so far by a fair margin - but something I continue to respect about Two Dots is that there is a puzzle here. I'd argue that you must understand the way to beat Two Dots Level 102 in order to have a chance of beating it. That's why your reading this... so read on! 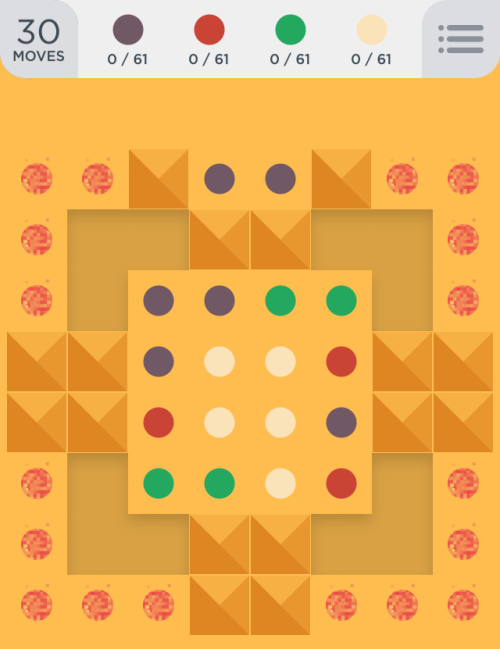 At the beginning of this level, there aren't that many Dots, and several of them follow a predictable pattern. You've probably noticed this in other Two Dots levels by now, and I believe it is a small hint from Betaworks about important areas to focus on. On Two Dots Level 102 you will see that there are always two horizontal Dots at the top, and there is always one square in the middle. Of course the Fire and Sandstone always appear in the same spots too, so these are all givens. In my experience, you have to approach these things in a certain order to have success, and I'll explain why.

The first move you should always make is clearing the top horizontal two dots. This will open up the top of the board for more Dots to fall down, and also creates the path for the Fire to come together. If you don't clear the top line first you'll quickly get starved of Dots in the middle, and you'll be more vulnerable to falling Fire with less move options to choose from.

No matter what you do next, keep in mind that your goal is to eliminate the Fire on the top left and top right of the board. If you've played this level as many times as I did, you may think that's impossible, but it isn't provided that you move slowly and focus on this goal. Knocking out Sandstone as you go will create more chances for Squares, but be very careful in doing so until the Fire on the top row is clear. Squares are extremely important, because they are the only effective way to press back the Fire.

Warning Each time you drop Fire bits from the top row into the middle by matching, you'll have to quickly deal with those bits in 1-2 moves or you are doomed. Consider carefully before making a move which will cause Fire to drop down, and try to have a follow up move planned to take it out.

The middle Square that you start with helps to get a toe-hold vs. the Fire and to set up further Squares. Typically, you should plan to use it on turn 2 or 3 depending on what you get in your first move. Since the key is to stop Fire from growing, a move that stops both Fire pieces from spreading is better than a move which stops only one Fire piece from spreading, which in turn is better than a move which doesn't stop Fire from spreading at all.

Once you have established a toe-hold, and gotten the top row of Fire quenched, you'll find the rest of Two Dots Level 102 much more straightforward. Squaring allows you to break Fire all over the board at the same time, and in general your focus should be to creates Squares on every turn possible. This is so much more possible once you don't have pieces of Fire dropping into the mix everywhere. It also serves the added benefit of working towards your overall goal of matching Dot colors. If you keep Squaring, you'll find that it is possible to completely eliminate the Fire, but do keep in mind that it isn't required to do so.

Pro Tip If you've still got Fire around on the bottom, it can sometimes help if you let it connect left and right sides. This will mean on less Fire Dot per turn to deal with until you split them apart again.

Pro Tip As you get to the final moves, keep an eye on your color totals, and make some non-Square matches if needed to seal the win.

Do you think Two Dots Level 102 is the hardest? Are you still stuck? Did these tips help? Let us know in the comments!