The Weaponographist is a top-down arena combat hack-n-slash game from Puuba, makers of Concursion. We saw The Weaponographist at the Media Indie Exchange booth at the SxSW Gaming Expo. With its release imminent, they've given me a copy to put through its paces. I've spent a good dozen hours with the game now, so it's time to pass judgement. What's the deal with the Weaponographist? Should you play it? Let's find out in my Weaponographist review.

Related Video I ran through the preview version of the game right before release over on our YouTube channel:

Doug McGrave, legendary demon hunter, was just minding his own business, walking through the woods. Some old lady accosts him and demands that he "save their village" or whatever. Since they couldn't afford him, Doug declined. Turns out this old lady was a powerful witch, who cursed Doug, kidnapped him, and basically made him her demon hunting slave. Now Doug is at the mercy of a bunch of communist, demon plagued villagers, battling ever more powerful foes at a significant handicap.

Okay, okay, so maybe Doug was being a bit of a jerk. And by "bit of a jerk" I may mean a huge, unrepentant a-hole. But still, this is a pretty serious situation. While Doug can't "die" per se, he is stuck in a neverending demonic quagmire with little hope for escape. This is where the game begins - you play as Doug, and must brave the dungeon to save the village, while dealing with the effects of the witch's curse.

Weaponographist stream! We streamed The Weaponographist before it was available! You can check out our stream here, and don't forget to follow us on Twitch!

A Horrible Night to Have a Curse

Boy, what a curse it is... Not only have you been busted down to a level 1 noobcake and lost all your gear, you also must constantly kill demons in order to make progress. If you're not killing, the combo meter is quickly draining. If it fully empties, your experience starts to drain as well.

Since punching demons with your bare fists is a bit... inefficient, you've got to salvage what weapons you can from enemies as you progress. Each enemy in The Weaponographist has a chance to drop their weapon when killed, and both the demons and the monsters are all a bit unique. For instance, you might fight a unicorn that belches missiles from its horn, and then steal its horn to make a makeshift rocket launcher for yourself. Or you might encounter a lion tamer (a literal lion in this case) and steal its whip.

Pro Tip Keep an eye on the durability of your current weapon, and know where the other weapons have dropped. Don't get caught by surprise when your weapon breaks!

In addition to weapons, there are also magical items available. These are a bit more rare, but just as unique. One of the first you find is a tuba that fires a massive blast in a straight line. There's also an orange octopus wearing shutter shades and carrying a quartet of blasters. Suffice it to say, these magical items balance their rarity with room-clearing power.

After clearing a number of rooms, you've got to face off against a powerful boss. 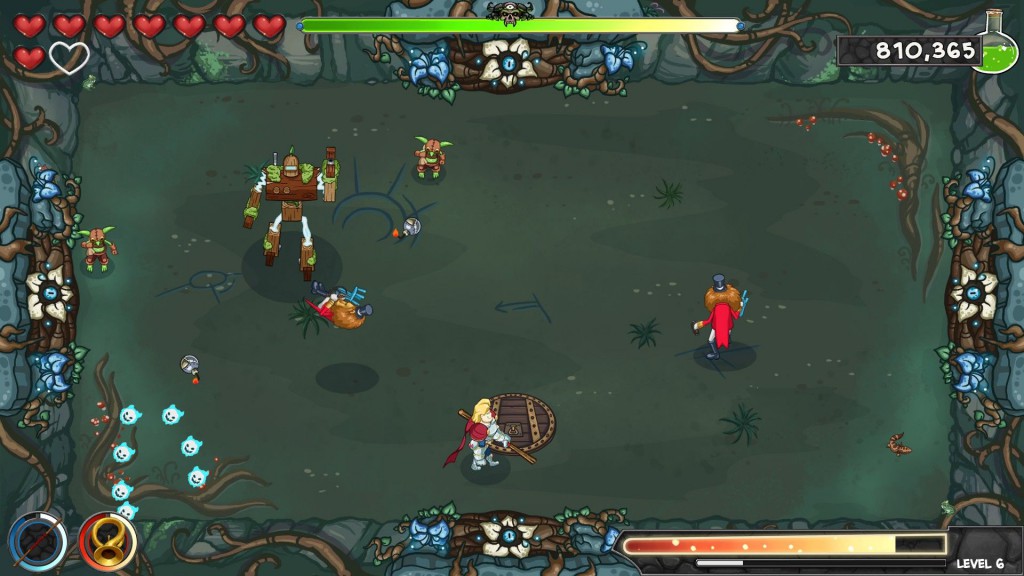 Pro Tip Make no mistake - the curse is still in full effect here. You've still got to kill demons in order to survive, both to keep your combo going and to ensure a steady supply of weapons.

There are a total of 5 levels to the dungeon, each longer than the previous. After clearing all 5 levels, you unlock the ability to buy "hardcore mode" - which lets you replay the game, but with the curse amplified to the extreme. I played through the entire game once and the first floor on hardcore, and it took me around 10-12 hours to finish. 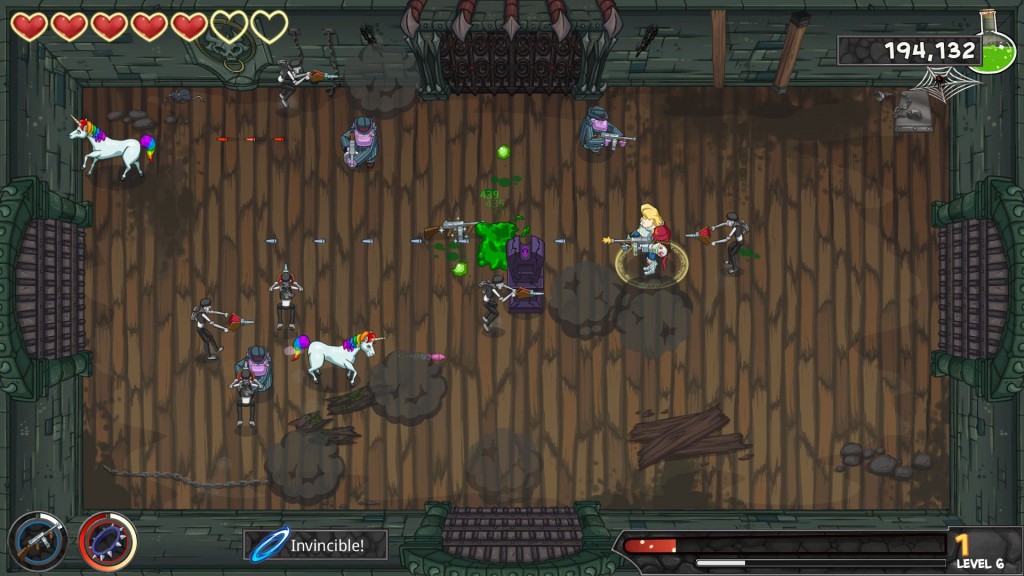 Each room in the dungeon feels like a new challenge. Since there are so many different enemies, with different tactics and different weapons, I find myself constantly adapting my tactics to new situations. I can't rely on my favorite weapon and a cheap strategy in order to win. I've got to keep moving and keep my wits about me in order to succeed.

I found early on that there were a few weapons I just didn't like. But as I progressed further, I found that the real issue was that I didn't understand how to use them properly. For instance, there's one weapon that makes you swing a mace around yourself constantly. You can't go charging up to melee enemies with this weapon and hope to survive - you've got to get the timing and range down to really do damage without getting hit. 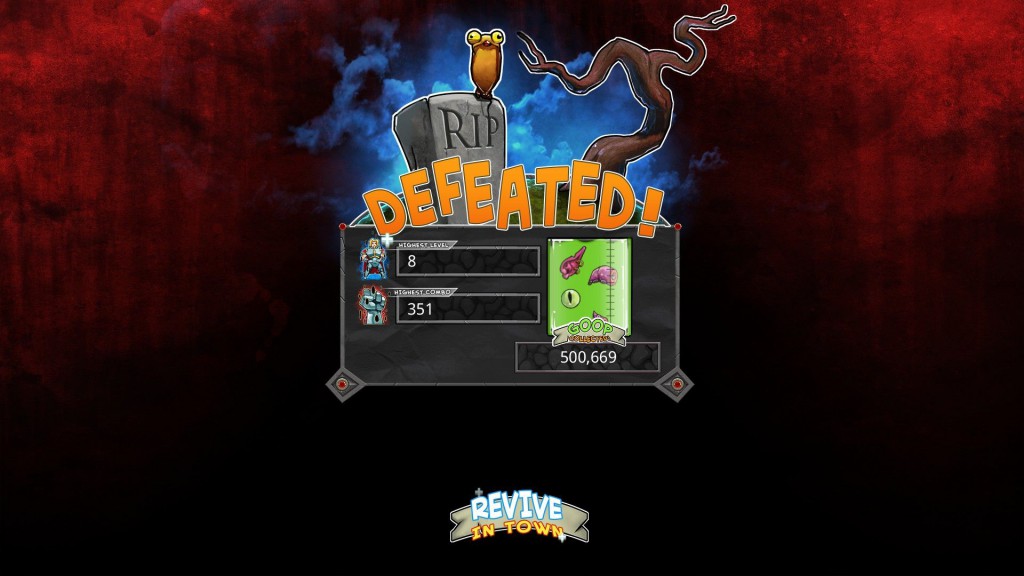 When you die (and you will), you respawn back in town. Here, you can spend your accumulated "demon goop" (ew) as a currency to gain bonuses for your next run into the dungeon. There are general upgrades, which weaken the curse to an extent, and then there are upgrades for weapons and magic. Finally, there are upgrades that spawn temporary effect runes in the dungeon, which have various positive effects.

Pro Tip Upgrade your health and reduce the combo curse early - both of these are really important to your survival. In the early going, try to focus on a few weapons, ideally the ones that drop while fighting the current level's boss. However, all weapon upgrades eventually become worth it.

Whenever I'm playing a game that features death as a core mechanic, I try to judge it based on how frustrated I am whenever I die. Did my death feel like a setback? Did I lose a lot of progress? Will I have to grind my way through something boring in order to get back to where I was? 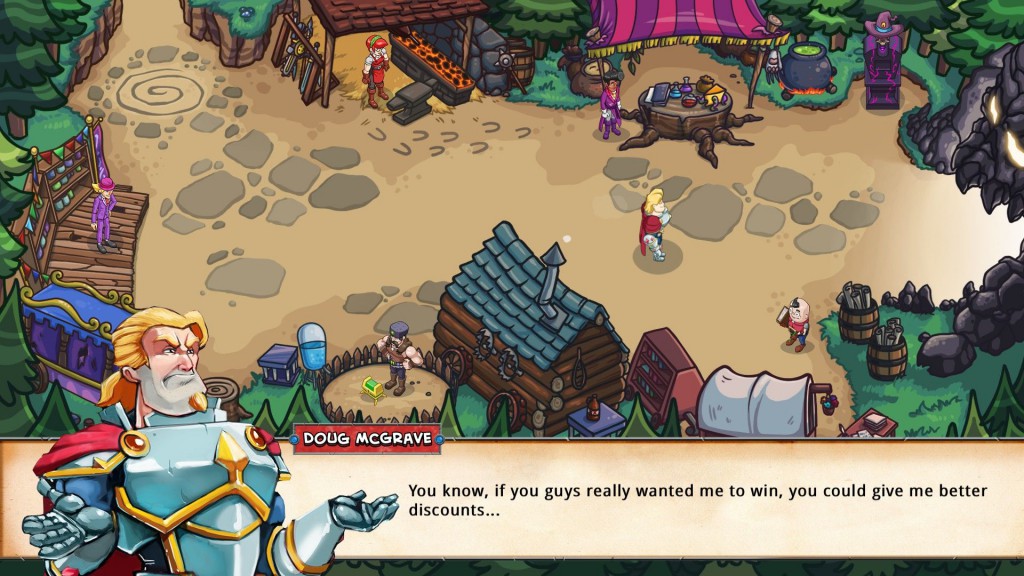 In the case of The Weaponographist, I actually didn't mind dying at all. I feel like sometimes there were rooms where the same enemies spawned every time, but for the most part each room had enough randomization that every playthrough was a unique challenge. The meta-game of upgrades in town also made me want to die occasionally, just so I could power up and chew through the demons faster.

Pro Tip Ranged weapons can make your life easier by letting you kill demons without chasing them around. If you're trying to speedrun a level, mastering ranged weapons is practically a requirement.

Most of the complaints I could level at The Weaponographist are pretty slight. For instance, I'd like my weapon durability to be a bit more obvious. Usually I'm not paying attention to the lower left corner of the display where it's shown. There's also not a lot of variety in terms of combat arenas. Most rooms are identical, except for cosmetic differences.

If you enjoy button mashing dungeon crawling, definitely check out The Weaponographist! There's a free demo that features the first two levels, and any progress you make carries over to the main game.