How'd you like to run a luxury space destination? Maybe exploit some planets to make cheap consumer goods? Part management sim, part action RPG, and part god game, The Spatials joins the ranks of Dwarf Fortress, Evil Genius, Gnomoria, Prison Simulator and similar titles that focus on constructing and managing a business along with a roster of workers and supplies. This is a historically complex genre that is hard to get right - how does The Spatials stack up? Let's find out in our review!

(Just in the interest of full disclosure, the folks behind The Spatials were kind enough to give us a copy of the game via Humble for review.)

The Spatials tasks you with managing an asteroid space station. The station is staffed by workers who produce stuff for visiting tourists to buy, and as they level up these workers have... needs. They start out just wanting to sleep occasionally (slackers...) but then they start to need need food, drinks, and later still they start to "crave" particular items like pizza or... rations. (Mmmm, rations....) Keeping your workers happy requires that you build and stock the station with things they they require. This requires several different things - the right resources, the right technology, the right manufacturing, and the right distribution.

Before you can exploit a planet's natural resources, you've got to complete a mission on that planet first. To complete the mission, you've got to send an away team of 5 workers to the planet and accomplish some set of objectives. Most of the time the objectives boil down to "kill X bad things" or "destroy Y evil(?) buildings." Some planets have plot missions that have a bit more backstory associated with them, but they generally boil down to these same objectives in the end. 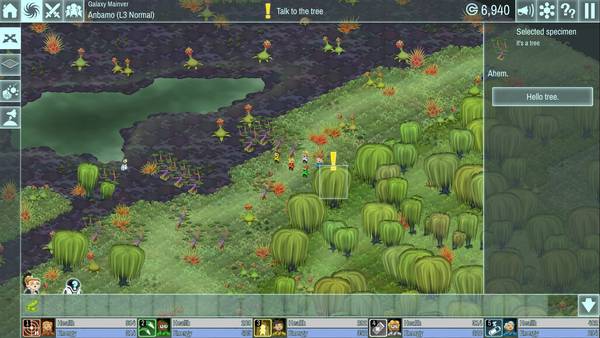 The combat during away team missions is somewhat like a RTS game. Your team moves where you click, and they attack anything you hold the mouse button on. They have active abilities with cooldowns you can trigger as well. There's not really much of a way to change their formation or move individual crew members, though. Mostly the missions consist of clicking to move towards whatever it is that needs destroyin', and then clicking on the thing until it's properly destroyed. Lather, rinse, repeat.

Once you've completed the mission, you can then pay a nominal fee to exploit that planet's resources. You can also replay the mission on a harder difficulty in order to multiply your resource gains. The resources flow into your stores on a time interval that can be sped up by assigning some of your workers to the system's embassy.

Completing missions and gathering resources is only the first part of the puzzle, however. Once you've got resources, you've got to turn them into useful stuff (food, drinks, trinkets, etc) and then make them available to your workers and to visitors. All of this requires technology. There's a fairly deep tech tree in The Spatials, and you earn points towards it for every new planet you explore. With these points you can unlock new room types and new buildings. 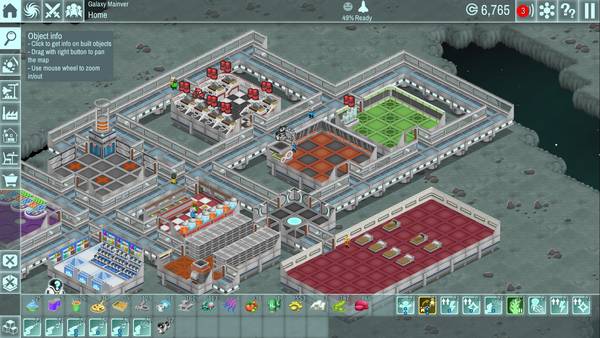 Your workers can undertake tasks at each building to produce goods. Once the goods have been produced, they're available for use by your workers (or to be bought by visitors) at the corresponding building. For instance, a worker might produce pizza at your kitchen from a combination of raw materials. then at the dining area, another worker can eat the pizza to satisfy their need for food.

There's a bit of tension here, as your crew levels up from missions and other activities and then requires more and more stuff in order to stay happy. You've got to therefore balance your resource intake and production chains so that you can continue to satisfy their needs. Meanwhile, you've got to have an overstock of goods so that your station can make money and you can afford to buy and build new things.

These mechanics remind me of the Anno series of games, although it's not nearly as difficult to maintain a proper balance. After some initial issues with the first few star systems containing relatively little water, my station quickly reached a sort of equilibrium. I feel confident that I could leave it alone for hours and not have anything particularly bad happen. Most games in this vein do something to upset your equilibrium over time - for instance, you might get attacked, or new immigrants might arrive, or there might be a shortage of goods, or something of that nature. As it is, I feel like I can just run the clock on the game and amass a pile of credits easily.

The repetitive nature of combat and the same-feeling away team missions are kind of a let down as well. I can't really play strategically with the simplistic controls. I really just have to overwhelm the enemy or get my butt kicked. Despite the somewhat random nature of the maps, the 5 or so enemy sprites and even fewer combat tactics they use get old quickly.

On the other hand, most games in this genre are not nearly as well polished and fleshed out. Having a competent combat system and RPG-esque elements at all is something of a luxury. The addition of tech trees, and the depth of the stuff on offer is really awesome as well. I didn't feel like I needed a wiki to understand the basics of the game. A lot of stuff "just works" and is relatively simple to comprehend.

The art and humor are also a big plus. The Spatials has sort of a cartoony Star Trek style. Everything is brightly colored, and well drawn and animated. The mission briefings and other in-game text are pretty funny to read.

I think in the end The Spatials is a good game, and it could be a great game with a couple more patches. The bones here are solid, and there's a lot of interesting content and entertaining bits to play with.