You may recall that Shadow Tactics: Blades of the Shogun took home our coveted "Best in Show Overall" award from SxSW Gaming 2017. Cons are a great place to get a quick demo of a game, and maybe a few impressions. Really, though, sinking your teeth into the full experience is the only way to truly know if a game is good or not. Luckily, with the console release of Shadow Tactics on the horizon, developers Mimimi Productions were nice enough to provide me with a review copy! Let's see if it lives up to my hype - read on for our Shadow Tactics: Blades of the Shogun review!

I may not be the hardest of the hardcore when it comes to stealth games, but I'm no slouch. My stealth game resume includes all of the Deus Ex games (including no-kill and no-aug achievements), all the Splinter Cell games (100% achievements on Blacklist, for instance), Assassin's Creed (except for Unity, despite owning it, just heard bad things!), a few Metal Gear Solid runs, including 100% achievements for MGSV, indie titles like Invisible, Inc, Ronin, Gunpoint, and Volume... the list goes on and on, basically. I've been there. I've done that. I have the T-shirt. 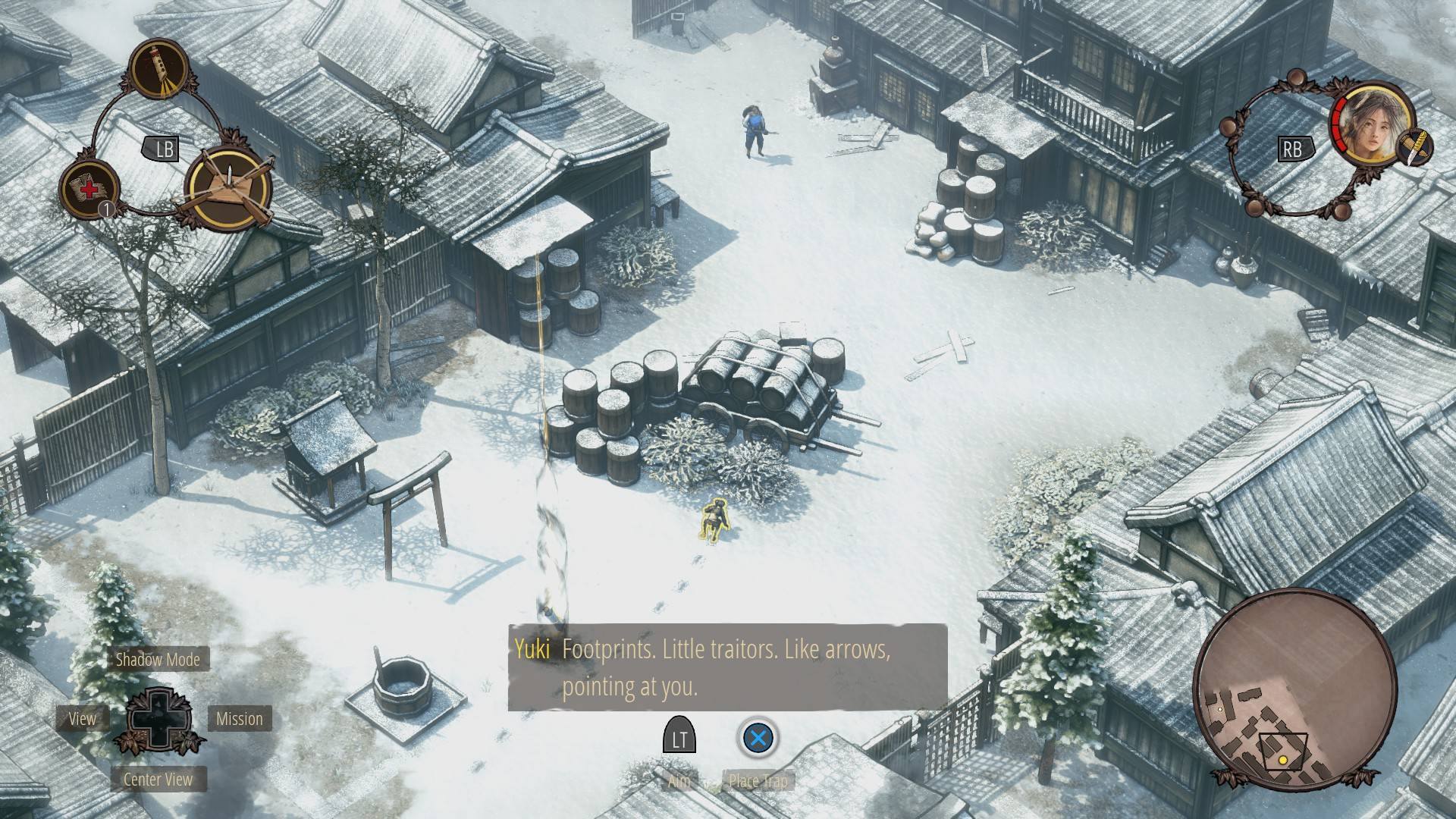 All of that is just so you believe me when I say: Shadow Tactics: Blades of the Shogun is effing hard. Trying to play it without getting spotted every 5 seconds makes it feel more like a puzzle game than an action game. I'll spend hours trying to unravel a seemingly simple scenario where my team of ninja masters is up against maybe 5-10 guards with relatively simple AI.

"Hard" and "fun" have a complicated relationship. Many games that are punishingly hard aren't fun for me. Shadow Tactics: Blades of the Shogun manages to be both hard and fun, though. One of the most important things Shadow Tactics does is it respects my time. Saving is fast, and loading is easy. Shadow Tactics will even remind you to save if it's been a while - a timer starts to tick away indicating the amount of time you've been playing since the last time you quicksaved. 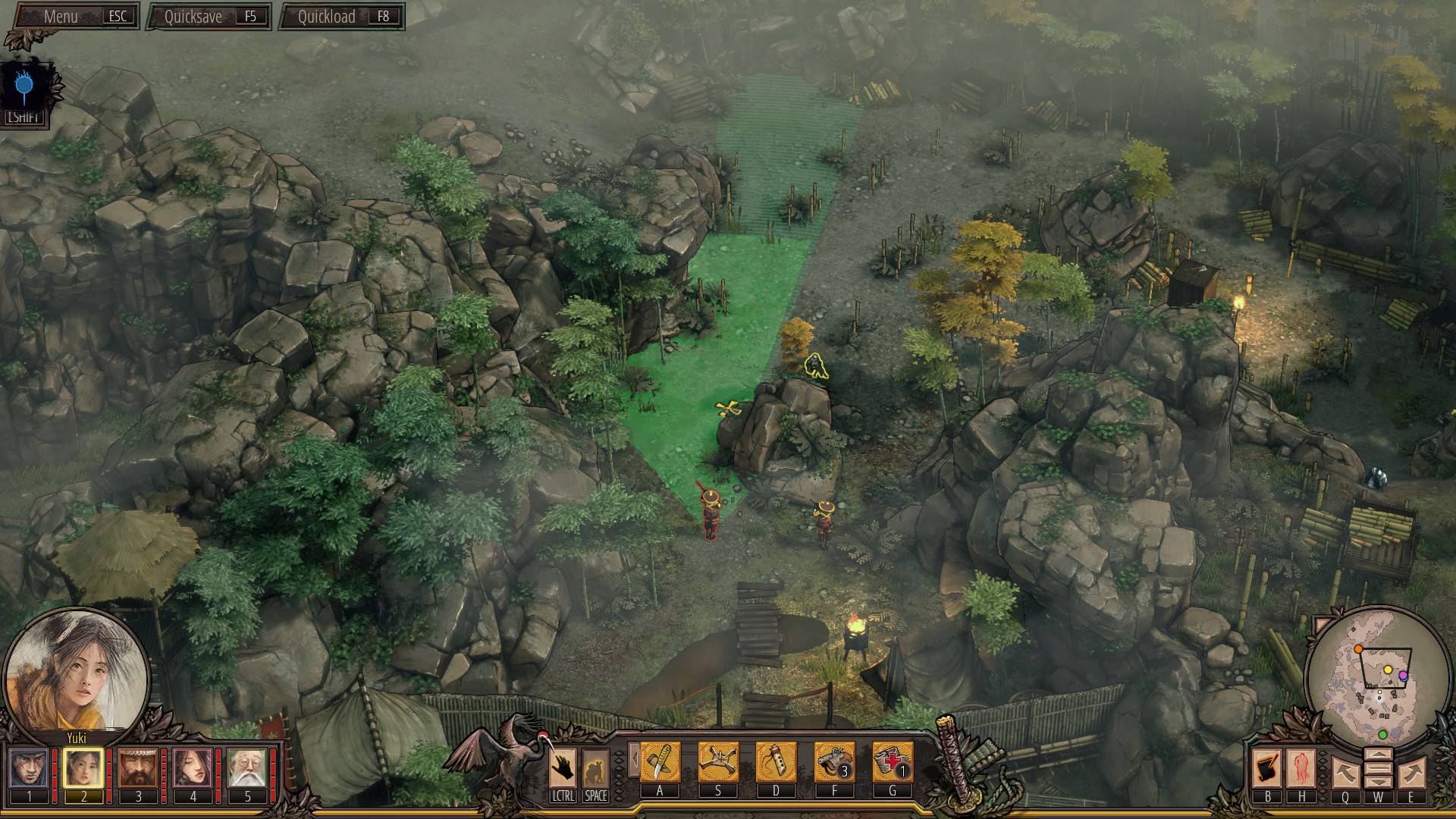 Shadow Tactics: Blades of the Shogun also does a great job of informing you about what's going on and where enemy weaknesses are. Enemy types are simple and straightforward, and it's obvious who you're up against and how they're going to react if provoked. At any point, you can pull up the vision cone of any enemy. You can also place a marker that will tell you if a particular spot on the map is in an enemy's field of view. As I played level after level, I slowly learned how to use all these tools to give myself an advantage.

Each of the characters in the game has different abilities, and learning how to use them is absolutely essential. Most of the time, you only have access to a subset of the character roster, so it's also important to understand the various ways in which you can combine abilities to overcome complex enemy patterns. 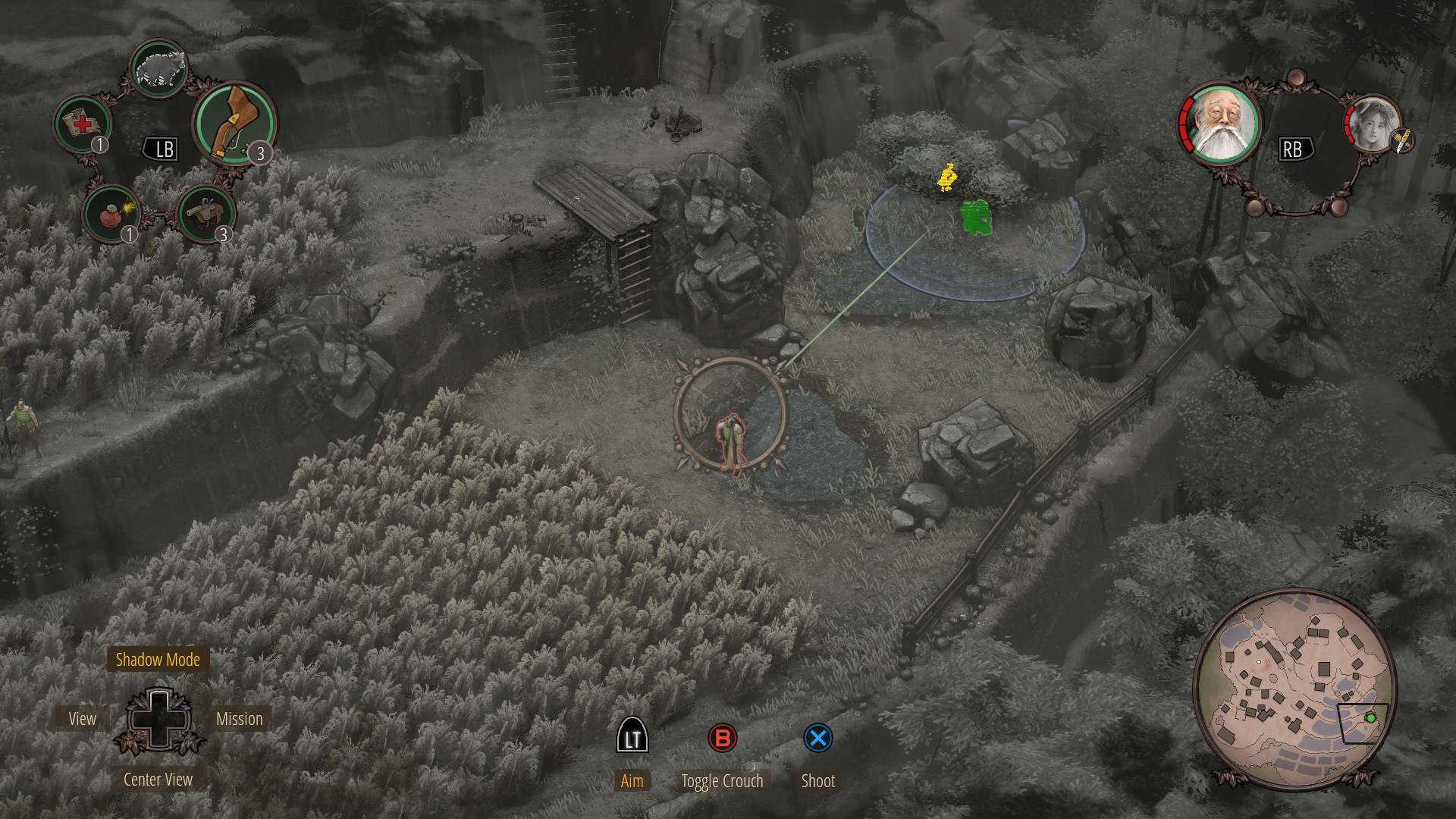 There's a really cool "Shadow Mode" that lets you queue up actions for each of your team to execute simultaneously. This lets you coordinate kills so that none of the guards have a chance to react, or to cause a distraction with one character while you're actively controlling another. 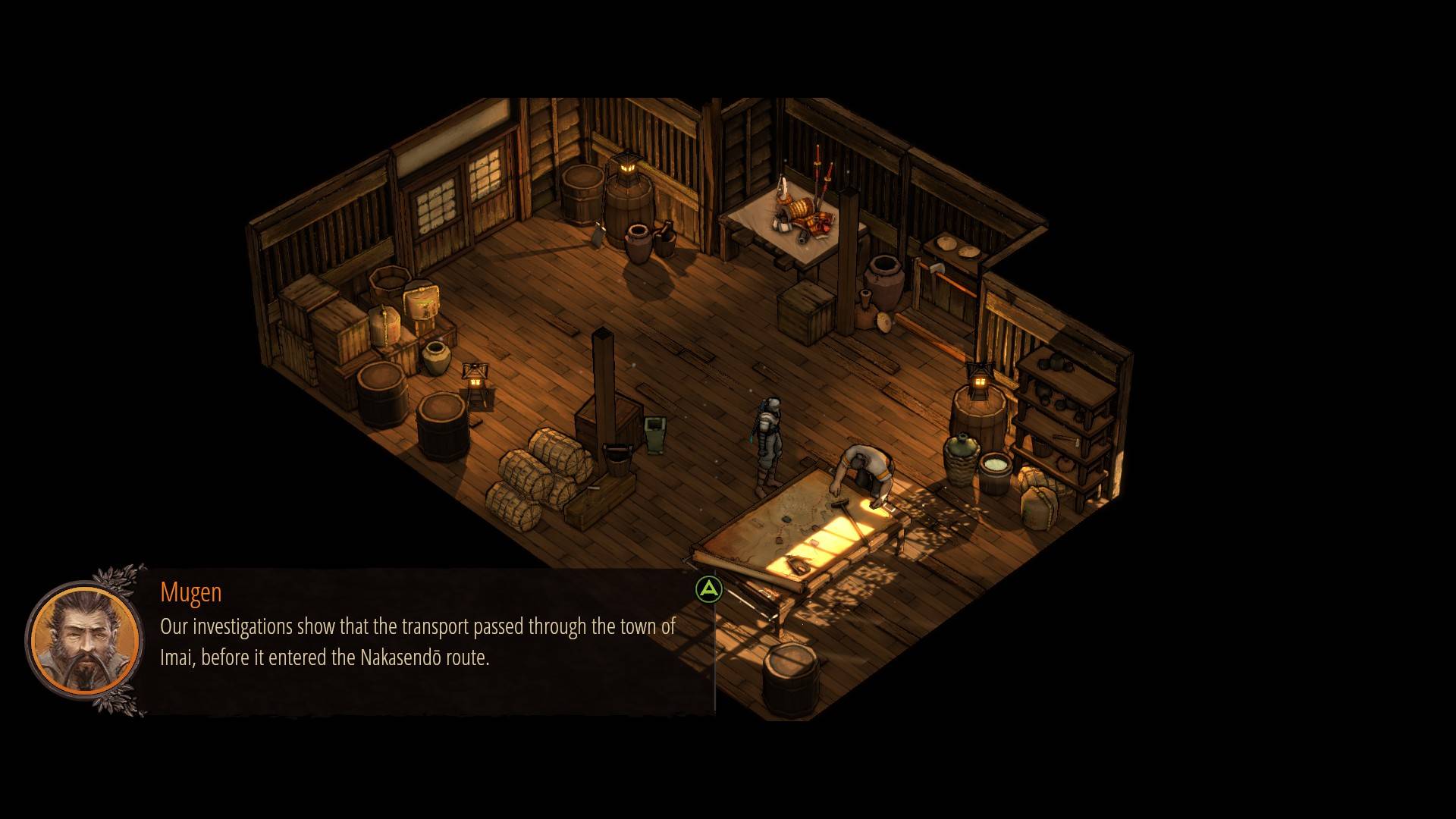 The story in Shadow Tactics: Blades of the Shogun is very "pop culture historical Japan" - lots of ninjas and samurais and honor and rituals. There's nothing super deep, but it's fun, and provides an interesting backdrop to the throwing stars and samurai sword clashing.

Shadow Tactics can be as long a game as you want it to be. There are a total of 13 missions with 3 difficulty levels, plus a set of "medals" for each mission that will likely require multiple replays to unlock. The first run through each level took me a good couple of hours, although according to the speedrun goals, it's possible to move much, much quicker. 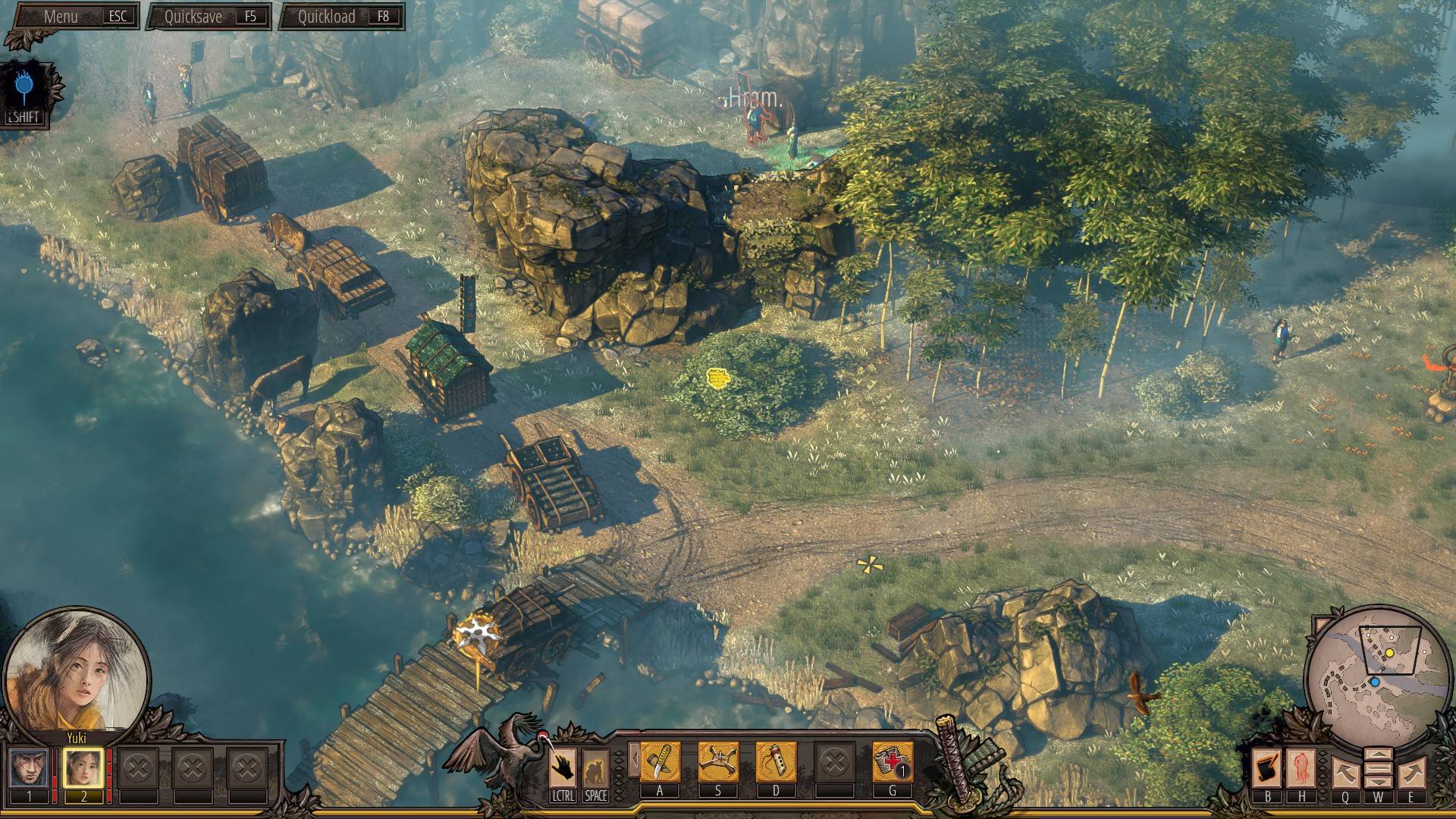 I'll try to pick nits about Shadow Tactics: Blades of the Shogun, but the truth is it is a very well done and highly polished game. Occasionally the camera does something I don't want it to, but generally these incidents are rare. One of the characters has a pet tanuki that can lure enemies out of position or into traps, but making fine adjustments to his position are a bit painful since the reticle snaps back to his owner after you stop moving.