Rocket League XBox One Review: Nothing but net

If you don't live in a hole, it's hard to imagine how you have not heard of Psyonix's Rocket League by now. It exploded onto the scene last year with a savvy "free on Playstation Plus" launch, and has been an Indie darling ever since. More recently, Rocket League even pulled in some impressive awards at DICE to add to the pile it has already collected. It has been on my list to check out since shortly after the PS launch, but there's been just one problem - no support for XBox One. While I almost picked it up on PC half a dozen times, I held off because I tend to be a rather solitary PC gamer other than when I join my partner in crime agent86ix - and Rocket League is clearly a game best played with friends. This week all that has changed, and Rocket League has finally blessed the XBone community with it's car soccer physics mayhem. Read on for my take on why this game has set so many hearts (and other body parts) on fire. 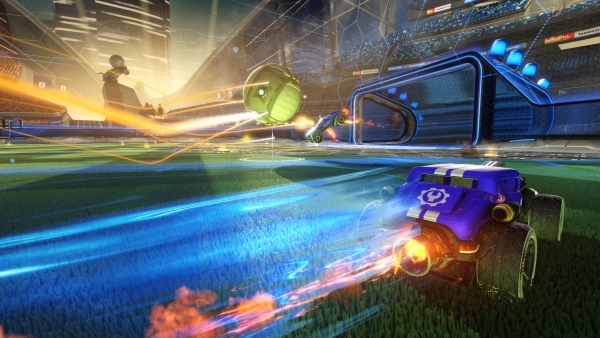 The feeling of riding in a Rocket League car is exhilarating, and that is no doubt because Psyonix has been working on Rocket League and its predecessor Supersonic Acrobatic Rocket-Powered Battle-Cars for the better part of a decade. The bursts of speed, the crashes, the near misses, and those moment when everything goes right... they are core to what makes it so hard to put down. Even without a ball the cars are fun to drive. Boosting is rather par for the course I'd guess, but the jumps and flips play a huge roll in ball handling and feel epic when you land them just right. Pretty much all arenas feature some amount of "wall riding" as well, which is fun in its own right, but can also lead to amazing steals and collisions that you never saw coming. All of this action could easily overwhelm newcomers (and sometimes it will), but the game features a pretty slick "ball lock" camera mode that helps you keep focused on the play at hand even when "circumstances" blast you to the far side of the arena. I found this to work really well, and in my limited experience with real soccer it would match what my intent would normally be - to keep my eye on the ball. 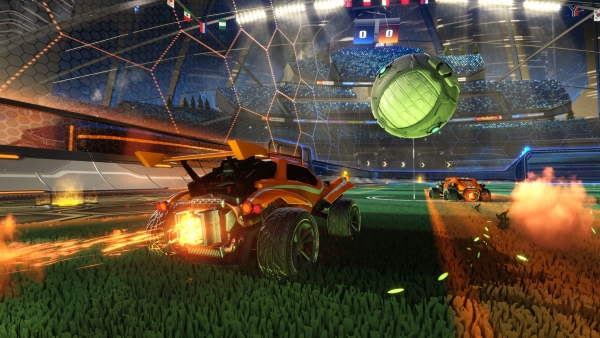 Rocket League supports match ups of anywhere from 1 vs 1 all the way to the insane 4 vs 4 mode. This simple variation can change the game from a tactical head to head chess match to a manic free for all chaos-fest, with the flexibility of the more middle of the road 2 vs 2 and 3 vs 3 to split the difference. When I first played the game on PC at a friends place we had quite a crowd, and opted for only 4 vs 4 matches to have room for everyone to play. The results were a maelstrom of boosts and flips, plenty of cheers and jeers, but not that much skill. Since I picked up Rocket League on Xbox One, I've focused more on 2 vs 2 and 3 vs 3 matches. With those numbers it is much easier to set up shots and play different roles. When you tag up with buddies to center and then score... well the high fives, they are plentiful. 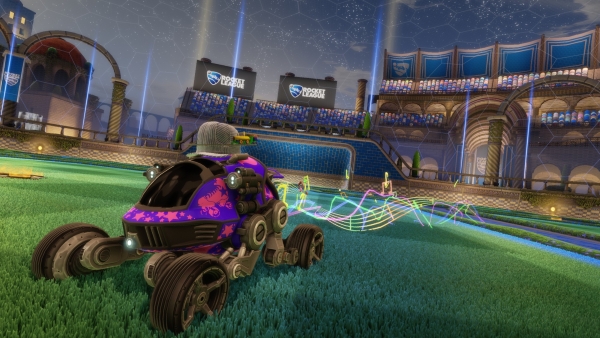 As I spent more time with Rocket League, more secrets of its success became apparent. Intrinsically it is a game type that works well multiplayer, but making the same experience as enjoyable alone is a tall order. Rocket League rises to this challenge with extremely low friction for starting a game, and plenty of fun to be had matching against real competitors or AI bots. Arguably, you can just mash button when the game starts up, and you'll probably end up playing a game you will enjoy. Matchmaking doesn't take long, and even when players drop during a match others seem to get slotted in very quick. Playing against real competitors isn't as intimidating as in most other competitive games because the looney randomness of ping-ponging ball physics punishes all but the most elite players fairly equally. If you want to hone your game or wait for friends to join though, you can always play with and against AI bots that do an excellent job of simulating a "real" multiplayer match up. In fact, there is even a "Season" mode where you can play a long series of matches versus AI teams in an effort to prove humanity's superiority over computers. It's probably how things will ultimately be decided, so we should all practice up. 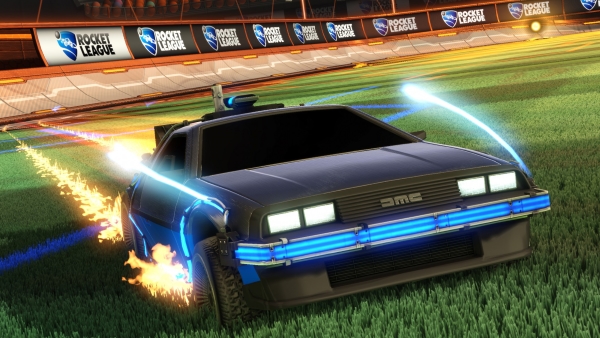 A massive initial library of customizable cosmetic options for tweaking out your ride are augmented by console exclusive unlocks and DLC add-ons. "Mutator" options allow rule tweaks that mix up the standard car soccer mechanics, and whole new game modes like "Snow Day" (hockey) are also on the roadmap (already available on PC/PS4). Once Rocket League has you hooked, you can keep toying with the mutator options and unlocking the costmetic items nearly indefinitely. With an already solid track record of delivering new content and game patches, XBox One players should still have a lot to look forward to even coming to the game half a year post-launch. 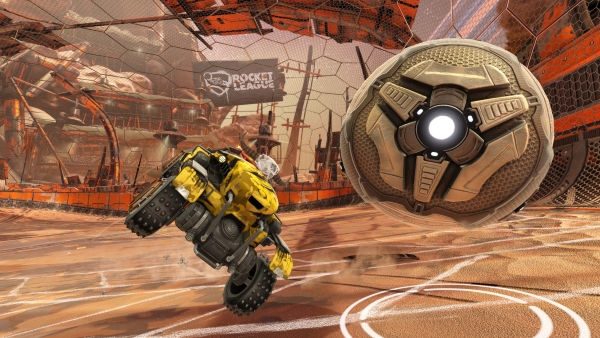 So to recap - Rocket League is a sports game even for the non-sports inclined, it's easy to pick up and play, and it's overflowing with customization and content to extend replayability to the max... is it the perfect game? Well, if Rocket League has a weakness I think it is hidden so skillfully that you quickly forget it is there. The truth is controlling a rocket-powered super car and hitting a giant soccer ball is hard. You will spend a lot of time chasing the ball, and even when you do get touches they can as often as not do just the opposite of what you intend. "Heading" the ball in a direction with the jump/flip mechanic is extremely difficult to time and master, and when you add in the variables of what other cars may do some interactions are downright impossible to predict and control. At my current level of skill, I often feel that successful goals were as much a matter of sheer will as of any skill I may have in controlling my vehicle projectile. The great thing about Rocket League is that it is so fast paced that you really don't have time to fret long about a missed shot or even a few enemy goals. Kickoff goals and lucky bounces can bring you right back into the competition even when you are a few goals down, and the game also awards experience points throughout the match to encourage you for good plays even when you don't score. Make no mistake - you will fail, and you will fail often. If anything, I think that makes the successful goal more and more exciting though... to the point that I sometimes stand up, pump my fist, and cheer after a successful score. As a lazy, jaded gamer, the fact that Rocket League can get me off my butt and celebrating is about the biggest vote of confidence I can give it.