If you're taking my advice to play Rebel Galaxy (and you SHOULD, dammit!), you're no doubt currently engaged in some type of space-based money making scheme. As is my way with big, complex games, I like to write up a guide to help new players out. In my Rebel Galaxy guide, I'll share all the tips and tricks I learned in my 60+ hours as a rebellious space captain extraordinaire.

Credits Rule Everything Around Me 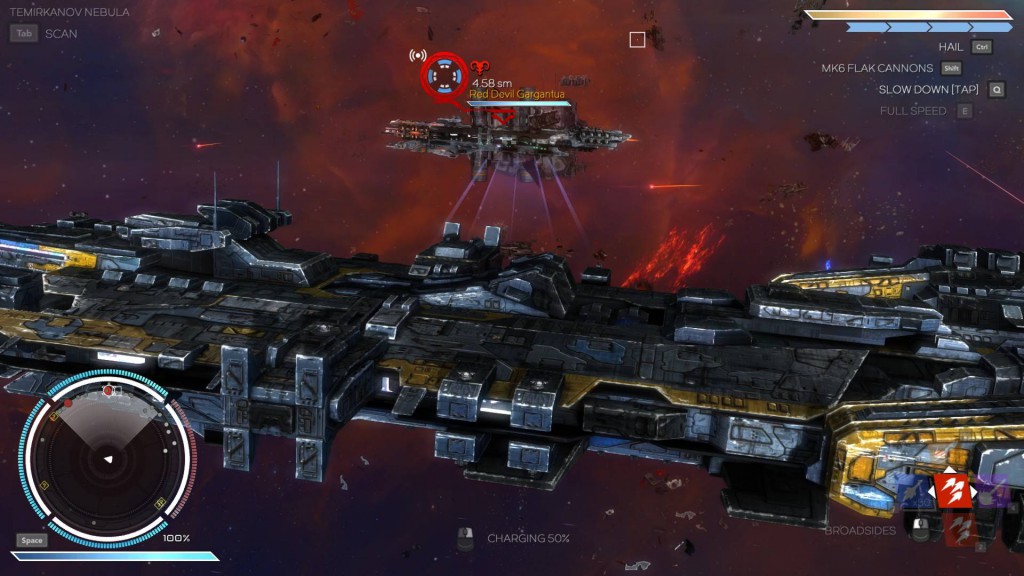 Making money is pretty easy in Rebel Galaxy, but you're going to need a lot to afford the top tier gear, so it pays to be efficient about it. I'd estimate that you're going to need somewhere in the vicinity of 50 million credits in order to buy tier 6 components (the best in the game, as far as I'm aware) plus a top-level dreadnought hull.

In the early going, it's pretty profitable to trade. Within a system, you should be able to buy goods below the "average" market price for the system and sell them nearby to make a quick buck. I say "average" in quotes there because I didn't find the average price to really be all that average. In fact, most of the time I found goods were cheaper than this, under normal circumstances. This can make it tricky to unload your cargo - buying low and selling high only works when you can, well... sell high, y'know? Jumping to other systems can sometimes help, as the good prices tend to vary wildly from system to system.

It also pays to talk to other traders - they're usually willing to buy your goods at a significant markup. Just target a trader who is out of combat, and then use the command menu to hail him or her.

Pro Tip You can find traders pretty easily by checking out distress beacon events. Beware of the "trap" versions of these, though, as they're just a fight with no real reward.

Pro Tip Traders will only make one trade with you, so make it count! Try stocking up on expensive goods and selling (or not even picking up) cheaper ones, so that they're forced to offer to buy high-margin goods from you. 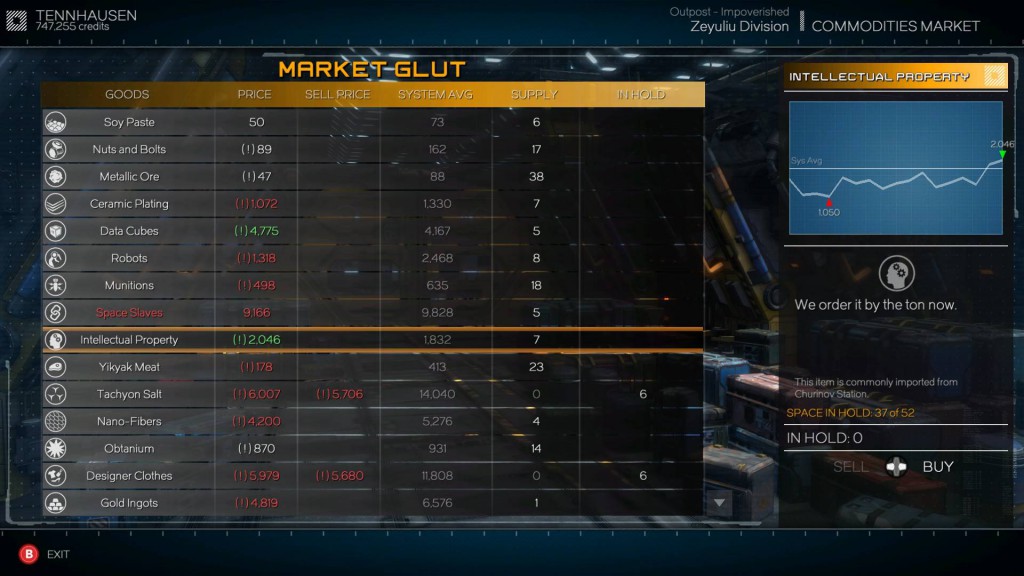 Another important thing to note while trading is the "events" that occur at the various stations as time passes in Rebel Galaxy. Events like "Mining Rush" and "Tech Boom" make certain goods plentiful and cheap, while events like "War" and "Famine" will make certain goods scarce and expensive at those stations. If you can establish a trade route between two stations that are undergoing opposite events, you can make a lot of credits in a short amount of time.

Pro Tip Ships will sometimes spawn in response to these events, and they might kick them off or they might end them. Some of these ships can be interacted with - for instance, many convoys you can intercept, either to destroy them or to trade with them. They often have lots of very high-end goods, so it pays to track them down!

Your Mission, Should You Choose to Accept it

By the latter third of the game, trading just isn't going to be super profitable. There aren't a lot of high-priced goods in the galaxy, so your overall profit margins are going to be low in general. However, late game missions can easily net you a million or more credits in very short order. 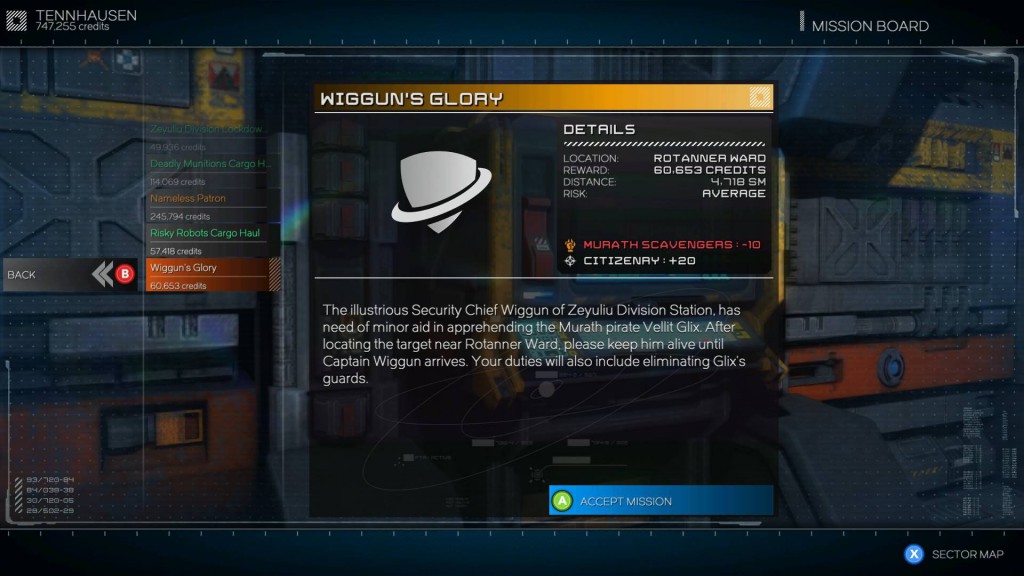 When picking missions, try to grab a bunch in the same system to save time jumping between and navigating intermediate systems. Also, pay attention to the type of mission - some are more annoying or time consuming than others. For instance, escort missions tend to take a lot longer than simple good runs. There are also missions that require you to defend an object or ship, and these tend to be prone to failure, which can wipe out minutes worth of work and leave you with no reward.

Pro Tip You can also go bounty hunting, although these aren't "official" missions per se. The easiest way to track down bounties is to talk to the bartender and pay a small fee. He'll highlight nearby bounties on the map, but keep in mind some of these bounties might be for friendly targets! 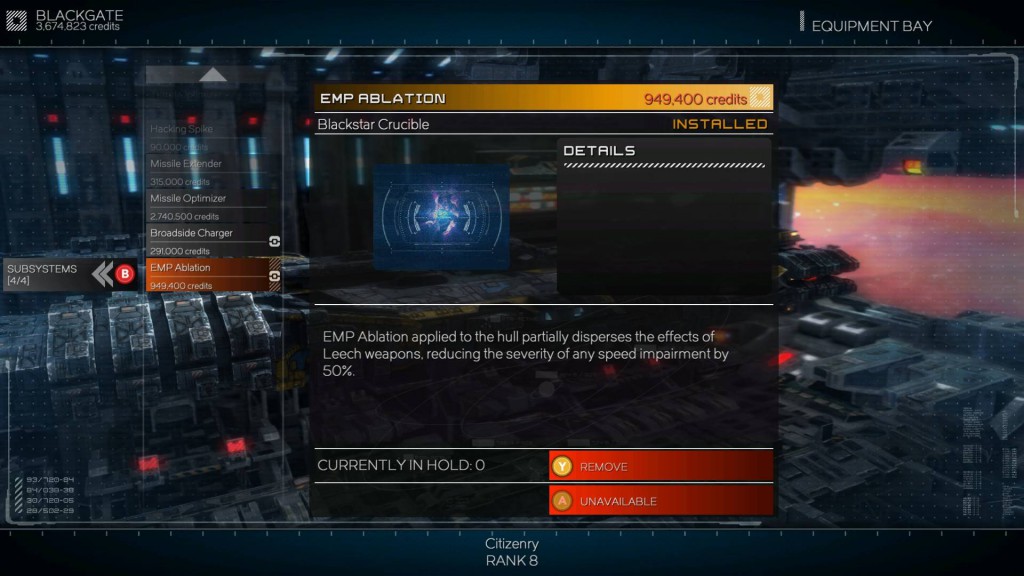 Once you've amassed some credits, it's time to spend them to pimp your Rebel Galaxy ride. All your weapons and subsystems transfer over between ships, so investing in the best you can afford pays off big time. Here are the subsystems that I suggest prioritizing, in order of importance:

Pro Tip If you come across "cargo containers" from exploring or from destroying enemy ships, make sure you pick them up! Sometimes they have exclusive gear that you can't buy in shops, and sometimes you'll end up finding something better than what you have. Cargo containers show up as blue squares on the radar, like free floating goods do. However, the cargo container icon is slightly larger. You can also use the Pulse command to highlight nearby containers, which show up as "Detected Valuables."

You might be thinking that you want to get into a bigger hull ASAP. There are definitely benefits to upgrading your hull, but keep in mind that if there are more turret mounts or subsystems on the new hull, you'll need to spend cash to fill them in order to get the full potential of your ship. Since any ship can equip any weapons or shields, upgrading your hull to a more expensive one might not always provide as much of a power boost as you might assume.

Get Buck, Get Wild 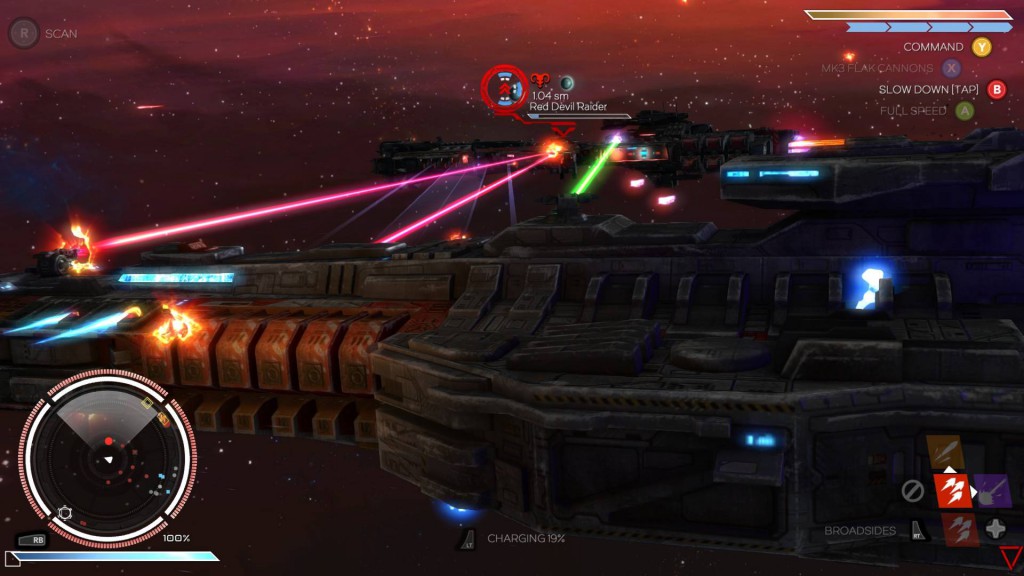 Running most missions (and really, just existing) in the universe of Rebel Galaxy inevitably leads to conflict. Fighting smart can mean the difference between pulling down 2 million credits on a "Very Hard" mission or exploding into a million shiny fragments of space debris.

First of all, try to stay out of the middle of a combat zone. This has two benefits. One, if you can draw out faster moving craft and fighters, you can take on smaller groups of enemies at a time. This gives your shields more time to absorb damage, and saves your hull from taking it instead. Benefit number two is that if you can keep enemies on one side of you, it's much easier to rotate through the quadrants of your shields.

Managing your position in combat is a matter of using your Sublight Boosters and your Deflectors effectively. The boosters are great for getting out of the middle of a swarm of enemies, while the deflectors can cover you either while you rotate which side of your craft is facing the enemy, or while attempting to blow past some portion of your attackers. Both the boosters and the deflectors run out quickly, so watch out!

Another tip for mastering Rebel Galaxy's combat is to make use of the various AI targeting modes. I like to set my missile turrets to "locked only" which allows me to control their ammo use - if I don't lock on, they don't fire. Most other turrets I will leave on "Any Target," simply because fighters tend to move fast enough that they're hard to keep in your sights, and tend to retreat often enough that setting them to "locked only" is highly inefficient.

Pro Tip Broadsides can actually hit fighters. If you're up against a swarm of fighters, try aiming towards one and firing! The aim assist is usually good enough that some portion of a fully charged shot will hit a fighter.

My favorite secondary weapon is probably the flak cannon. It can destroy incoming missiles, as well as damaging nearby fighters. The flak cannon can't easily destroy missiles that are aimed at the rear of your ship, but still being able to mitigate explosive damage from the sides can be a big help against capital ships and fighter swarms that use MIRV missiles.

Pro Tip Don't be scared by "Very Hard" missions - if you get good at combat, using the strategies I've outlined in this guide, you can sometimes pull off a "Very Hard" mission if you're careful. Some fights are just impossible to win without more upgrades, but especially if your shields/armor are ahead of the power curve, you might find yourself able to take on the occasional mission that the game thinks you're too weak for.