Pyre Preview: The Next SuperGiant Masterpiece? 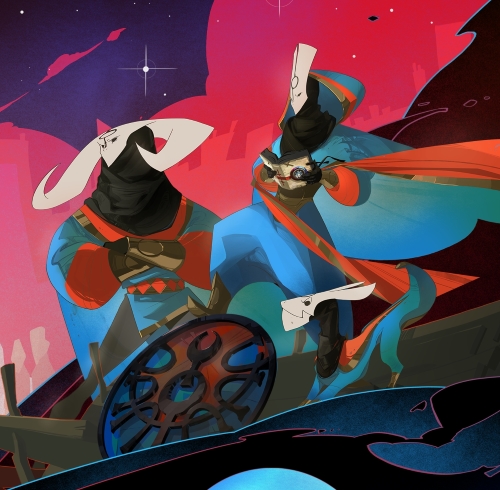 While we were at RTX 2016 this year we got to spend some quality time with a demo of Pyre from SuperGiant Games. If you've read many of our previous reviews, you'll know that we are big SuperGiant fans.

The concept for Pyre is quite divergent from Bastion and Transistor, and according to Michael from SuperGiant making games that are unique and have one word names are both goals of the developer. Pyre will be a single player experience with beautiful visuals like its predecessors, but that looks to be just about the end of the similarities. 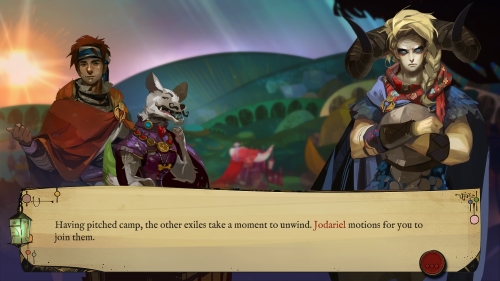 In Pyre, players will take on the role of the "Reader" - a sort of "puppet master" that can control the games fighting sequences from afar by directing the other characters in the party. "Reading" is a rare talent in the world of Pyre, but it seems to involve more than just basic literacy. I can't recall ever controlling a 3 vs 3 magic sportsball event just by cracking a book, but that is exactly what "reading" in Pyre entails and it looks like players will be doing a lot of it. In fact, these competitive "Rites" are central to the games plot as well - since they offer the games protagonists, the Exiles, an escape which they desperately seek. They aren't alone, and freedom can only be won by repeated victories in Rites versus other Exiles. 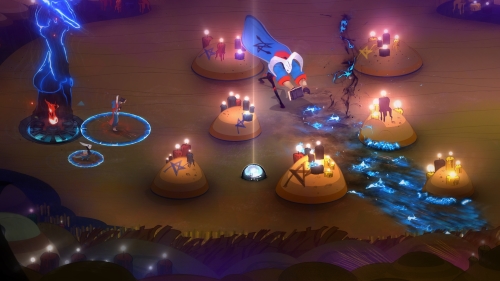 SuperGiant explained that players will be able to choose from various characters throughout the game to craft unique teams and as we played the demo there appeared to be a pretty substantial skill tree for each of them as well. While I was waiting to play the demo, Michael and some of the other SuperGiant staff introduced the concept of the Rites through various amusing comparisons such as "Diablo meets NBA Jam" or "DOTA meets Rocket League". I think that is pretty close to what it feels like, but I'd throw in Destiny's Rift multiplayer mode, as another similar comparison. As the Reader, you control the Exiles and attempt to carry the "Orb" into the the opposing teams titular "Pyre". Antagonist AI Exiles attempt to steal the Orb, or vaporize your Exiles, or both - and the action heats up pretty quickly. 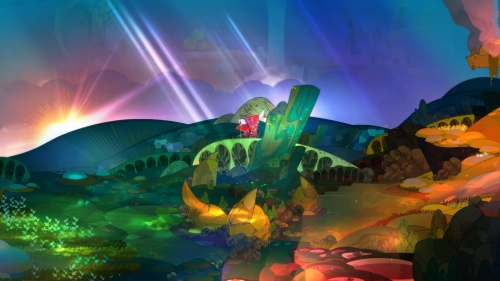 While Pyre appears divergent from SuperGiants previous titles, there are common threads that make me optimistic about what the game will become. Even in this first look at the game, the visuals and art aesthetic are breathtaking. The world of Pyre is a magical place that I want to experience and study in the same way that I read every backstory in Transistor or played all the way through new game plus in Bastion. The introductory characters are already pretty intriguing, and SuperGiant explained that the cast of characters in the game extends significantly beyond those three. The demo leaves me hungry to dig in deeper, but for now I'll have to just mark my calendar for "some time in 2017".