A while back, agent86ix got me hooked on Puzzle and Dragons. After quite many hours crawling through dungeons and evolving monsters, I felt it was a good time to share some Puzzle and Dragons Tips and Tricks that I've learned over that months that I've played the game. Old vets may know a lot of these, but even after playing the game for months it took me quite a while to learn some of this stuff. Hopefully you can benefit from my experience - enjoy! 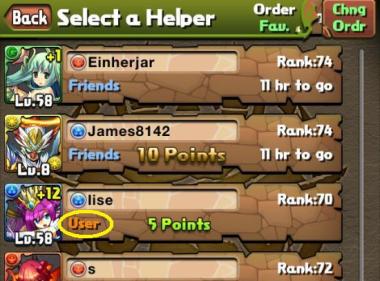 Choose helpers from random players when you are tackling relatively easy dungeons, like the "Alert!" dragon ones that pop up for a few minutes. The success rate for friend requests is very high, and this could be your chance to grab more healers, or other valuable leaders like Orochi or Odin. After a few days of spamming friend requests you'll have a pretty good stock of helpers to choose from. Remember to try for duplicates of the helpers you use most often, since you can only use the helpers of friends who have logged in recently. 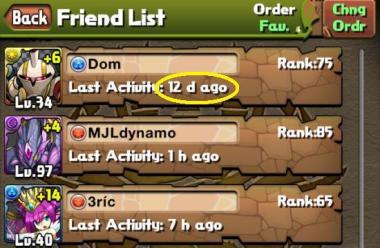 2. It's tough being popular

Friends are a stable of leaders. Make sure they are active, and that they provide leaders that you use. It is also valid to keep a few folks with crappy leaders if you think they are likely to use your leader frequently (to get you Pal Points). Periodically review your friends list and kick out folks that haven't played in a long time. 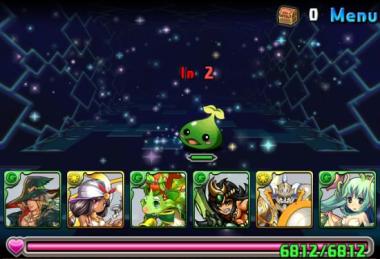 In the first round of a dungeon, clear out all but one monster, and then drag out the final kill as long as possible. Ideally you will charge all of your abilities at this point. In future rounds where you use abilities, repeat the process to charge back up. In order to get credit for moves, you must complete at least one match - just moving pieces around will not advance your ability counters. This trick works especially well for teams that are only one or two colors - just keep matching orbs for colors which are not in your team. It's also a great way to save up some target orbs for the next wave, so you can lay the smack down on the next big group.

Having a Healer leader is a huge benefit, and should be a strong consideration for many dungeons. The "burn them down" approach may get you places in the early game, but it take a pretty high level team to make it possible in the harder dungeons. High level bosses tend to have a lot of hitpoints and sometimes hit too often for a team that is strong on attack, but weak on heals. I recommend Alraune, Archangel, and Amaterasu, because in addition to leader skills which auto heal, they also have active abilities which give additional healing in a pinch. Siren is also pretty good, and more common to find, but her Guard Stance - Water isn't quite as good (since you may not have any fire orbs when you want to use it).

Odin's Robe of Protection, Orochi's Perseverance and the Ogre's Resolve make it possible to tank huge blows from a single target. Perseverance or Resolve coupled with a healer even makes it possible to create a "zombie" team which is reduced to zero every round, but heals back to full every time you make a match. This can be very useful in some of the weekly dungeons, especially versus the dreaded Keeper of Rainbow. It is also pretty useful all around, provided you have enough healing to keep your HP high, and enough ATK or special abilities to break up monsters attacking in groups.