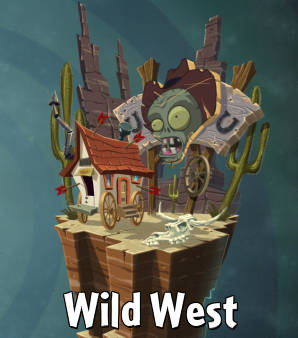 Once again we find ourselves in the Wild West, this time to discuss the zombie threats you will face there. Just like Ancient Egypt and Pirate Seas, the Wild West in Plants vs Zombies 2 is full of Wild West themed zombies to test your planting mettle. And hey, I made it through the entire intro of a western-themed PvZ2 article without once resorting to a "y'all," so there's that.

Common Zombies - Every stage has these, they start out just "normal" and then also get cones and later buckets on their heads. The cones and buckets boost their ability to soak up damage. The cone doubles their health, and the bucket about triples it. A normal Peashooter can down a normal zombie in the time it takes for the zombie to shamble 2 squares forward. During a "huge wave" of zombies, there will be flag carriers, but although they think they are special, these are just like normal zombies, so whatever. Hopefully you've been reading since the beginning and can practically sing these words without reading them over again.

Prospector Zombie - Man, the zombies in the Wild West start out hard, and they're just going to get harder from here. The Prospector Zombie is carrying a lit stick of dynamite, and when it goes off he'll leap over your defenses and start eating them from the inside out. He generally goes from left to right once the dynamite goes off, so his interest in your brains is minimal. However, he will gnaw through undefended plants if left alone.

Pro Tip Prospector Zombies can be defused with plants that deal cold damage, like the Iceberg Lettuce. Like the Explorer Zombies in Ancient Egypt, though, fire breathing plants will reignite them. Make sure you have Split Peas and/or Bonk Choy to keep these guys at bay. If you've got mine carts, sticking Bonk Choy or Split Peas in these will make it so that you can move them around to react to a Prospector Zombie. If you're panicking and they're eating your plants, remember that the Bloomerang will fire backwards as well as up, down, and to the right, if fed Plant Food.

Pro Tip The similarities to the Barrel Zombie don't end with their strengths - also like the Barrel Zombie, these guys are weak to Spikeweeds, so plant these in their path and watch them bite it.

Poncho Zombie - The first couple of times you encounter the Poncho Zombie, you might think he's no big deal. His poncho absorbs some hits, but he seems like he's no stronger than a cone-head zombie. However, some Poncho Zombies have metal plates (a la Clint Eastwood and/or Marty McFly) under their ponchos. If you end up with one of these, they'll take as many hits as a bucket zombie, and that's bad news if you're unprepared.

Chicken Wrangler Zombie - The Chicken Wrangler Zombie by himself isn't much of a challenge, but he has a cluck... I mean a trick... up his sleeve. When hit, he'll release a flock of chickens that will run to your defenses and peck their way through them. These chickens hit hard and fast, making them a high priority to remove from the lawn.

Pro Tip It's no coincidence that these guys show up just after the game gives you the Lightning Reed - that's their major weakness. Chickens will end up extra tasty crispy super fast when hit by a Lightning Reed. Remember that the Lightning Reed can hit 1 row above and below where it is planted, so one reed will protect up to 3 rows if you plant it smart.

Zombie Bull - The final new zombie for the Plants vs Zombies 2 Wild West zone is the Zombie Bull. This guy will rev up and charge your defenses, and then launch a Wild West themed Bull Rider which looks a lot like an Imp at your defenses. This Bull Rider can easily go over your low-rising defenses and wreak havoc on the back rows. Between this guy and the Prospector, you're going to have to be on your toes with rear firing plants.

Pro Tip Like the Chicken Wrangler, the game gives you the Zombie Bull's weakness just before they show up on the scene. A Tall-Nut will block the flying Imp, although it doesn't block a lot of other things, unfortunately.

Related Guide Looking for a list of Wild West Plants and strategies? We've got you covered right here.