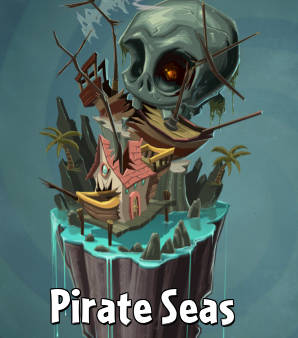 Along with the Pirate-themed backdrop is a whole wave (get it, wave? haaaaah, I'm just so funny!) of new zombie types to deal with. Here we'll cover all the Plants vs Zombies 2 Zombies you'll find while exploring the Pirate Seas!

Common Zombies - Every stage has these, they start out just "normal" and then also get cones and later buckets on their heads. The cones and buckets boost their ability to soak up damage. The cone doubles their health, and the bucket about triples it. A normal Peashooter can down a normal zombie in the time it takes for the zombie to shamble 2 squares forward. During a "huge wave" of zombies, there will be flag carriers, but although they think they are special, these are just like normal zombies, so whatever. Hey look, I can work the copy and paste keys on my keyboard!

Swashbuckler Zombie - The Swashbuckler Zombie can swashbuckle (is that a verb?) his way deep into your lawn, skipping over any defenses you have along the right side of the screen. Other than that, he's pretty much the same as a standard zombie.

Pro Tip These guys tend to only come in over water, and they don't tend to spawn in waves. A pretty good strategy against these guys is to use a Spring Pea to defend the square right after the water. It will bounce them right off the map!

Seagull Zombie - The Seagull Zombie moves fast and chomps your plants hard. They are also immune to any ground-based plants like Potato Mines, Spikeweeds, and Iceberg Lettuce. You'll need some fast firing, heavy damage plants in their way. They're still blocked by Wall-Nuts, though, so keep that in mind.

Barrel Roller Zombie - This zombie has cleverly hidden some smaller zombies in his barrel, and will happily roll over any plants in his way. His major weakness is Spikeweed (or Spikerock, if you prefer) which will end his barrel rolling tirade instantly. Regardless of how he's dealt with, he'll spawn two Imp Pirate Zombies into the lanes above and below him.

Pro Tip If the barrel breaks while the Barrel Roller is near water, one or both of the Imps will end up in the water, and that keeps you from having to deal with these guys at all.

Imp Cannon - The Imp Cannon is unique in that it never moves towards your plants - it stays firmly fixed on the right hand side of the screen. However, it launches Imps at your defenses, and much like Swashbuckler Zombies they fly over the first few columns before they land. Typically, though, these columns are water and can't be planted on anyhow. If you leave the Imp Cannon for too long, it will explode and send Imps flying pretty far into your defensive line.

Pro Tip Bloomerangs are your best bet against Imp Cannons. Other plants will tend to get caught up fighting the Imps, but the Bloomerang will do steady damage to the cannon despite its Imp barrage.

Pirate Captain Zombie - Yowza, this is probably one of the more challenging zombies you'll face in the Pirate Seas. A Pirate Captain by himself is no big deal, but this zombie comes with a parrot, which is capable of stealing your plants! If the parrot is with the captain, after a few seconds it will fly towards your defenses and grab one plant at random, yanking it right off the map.

Pro Tip The parrot can be destroyed just like any other zombie, so if the parrot seems to be gunning for a particularly expensive plant, use some Plant Food to hit it hard. Without his parrot, a Pirate Captain Zombie is no big threat.

Next up, the Wild West Zombies guide!