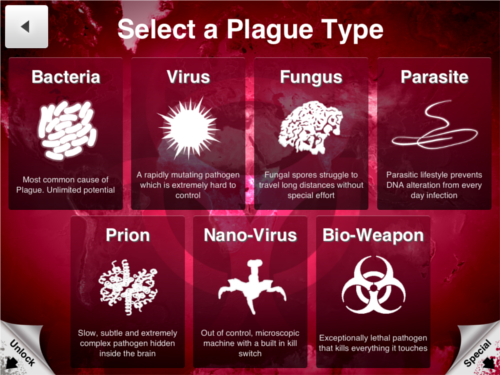 Tips for destroying all humanity

While the game does throw hints at you pretty frequently, it allows you to be pretty open ended on how you want to destroy the world. Especially at first it may seems so open ended that you get a little lost. Fear not, we've got some Plague Inc Tips that will help you stamp out all of mankind in a jiffy.

You get to choose the kind of pathogen, the country where patient zero gets infected, and what abilities are bestowed upon your beloved sickness. You can, and should, experiment with different abilities and strategies- but in general I find one over-arching philosophy tends to be most effective. 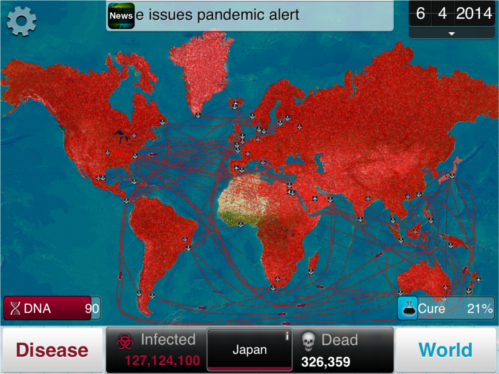 Depending on where you start, and what pathogen type you chose, you may find your initial infection rate to be pretty slow. Luckily there are a ton of way to evolve your disease to increase it's Infectivity. In fact, one whole section of the "Disease" menu is devoted to "Transmission" evolutions. In the early game, it really helps to focus your attention on Infectivity so that you can penetrate to all of the countries in the world before borders close and plane flights stop. If you fail to infect all countries before the lockdown occurs, it will be significantly harder to win.

Pro Tip You will often find that certain countries are hard to infect, or once infected don't become overwhelmed quickly. Depending on who is toughing it out, try adding Heat, Cold, or Drug Resistance to more rapidly increase the spread. Each of the Transmission evolutions also offers bonuses against certain country types, so choose accordingly.

Pro Tip In the event you do fail to get at some of those pesky island nations, there is still one hope. The top tier animal "Transmission" evolution called Extreme Zoonosis can penetrate even to island nations that have closed their borders. Be careful that your pathogen has low Lethality at this point, because once you get it on the island you want to give it time to spread before it kills off hosts.

For a time, you'll be able to happily propagate from host to host and watch the world map gradually start to bleed red. Eventually though, the jig is up and some damn scientific jerkwad will discover you. Not long after humanity begins a concerted effort to cure you that can be slowed but never really stopped unless you kill everyone first. This phase of the game is always the hardest. Continue to focus on Infectivity, but keep and eye on Severity and try to keep Lethality to zero. Severity determines how much the humans will spend on cure research, and the less they spend the better. Lethality of course determines if, and how fast, your disease kills. If/when your disease becomes lethal, donors from around the world will make it rain pretty fast - so it is best to hold off at this point.

Pro Tip It is necessary to get the ability "Drug Resistance" in basically every game. It is extremely useful in it's own right versus countries like Canada and New Zealand that have excellent medical care, but it also unlocks "Genetic Hardening" which in turn unlocks "Genetic Reshuffle". These abilities are some of your only options once humanity becomes focused on a cure. They won't hold it off indefinitely, but they will buy you valuable time.

Warning You've started a war with the humans, and it is important to know thy enemy. Use the "World" menu to check which countries are still healthy, and who is contributing the most to the Cure. Once you've reached crunch time, make fully infecting these countries your highest priority. Once fully infected, you can attempt to "go for broke" and switch to high Lethality symptoms in an attempt to wipe out the primary research funding. 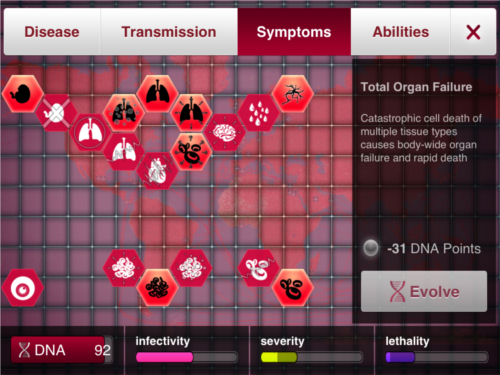 At some point, if you are doing things right, the game will give you a notification that everyone in the world is infected. As you are surely already in a race against the Cure, it is now time to flip the "kill" switch. Spend the majority of your DNA points on "Symptoms" that increase Lethality. Dysentry is particularly good if you are close to it. Insanity is fairly poor, but does have other benefits. Whichever you choose, shoot for rapid human extinction.

Pro Tip Once you've reached step 3, "Transmission" evolutions are mostly worthless. Refund them, especially those with no mutation chance, and spend those points on Lethality.

Warning Even with a downright deadly disease, it is still possible for Cure research to outpace you (pesky humans). Be sure to keep a few point set aside to spend on "Abilities" or "Symptoms" which slow down Cure progress.

Did you miss our review on page 1? Check it out by clicking "prev" below!