Pixel ru² is the debut game from C63 Industries, a partnership between two life-long tech geeks. We played a bit at PAX South, and wrote up our impressions as part of Indie HYPE. Now that the game is on Steam in Early Access, C63 co-founder Wolfenhex shot me a key to check it out further.

I'll start by saying that Pixel ru² is very early still - right now there are only a half dozen levels in the base game, the story elements aren't present, and there are still game mechanics left to implement, among other things. The duo at C63 are hard at work, however, and I've seen several updates to the game in just the week I've had access to it on Steam. 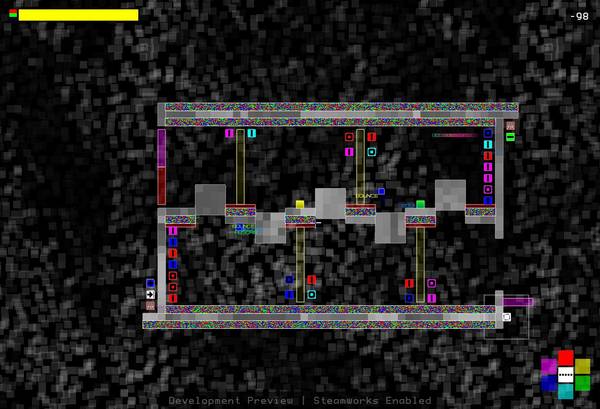 Pixel ru² is a challenging platformer at its core - think along the lines of Super Meat Boy crossed with Thomas Was Alone and you'll be at least part of the way there. The goal in every level is to get to the exit - but between your pixel and the exit are a number of different hazards.

These hazards generally take the form of a sort of static-filled bar that instantly destroys your pixel in an explosion of sparks. However, there are enemies as well. Enemies will move around and try to shoot you, but you have an array of weapons at your disposal to take them out. In order to beat them, you've got to fire shots at them of a complimentary color.

Your pixel avatar has a color as well, and this color can be changed by passing through various gates scattered around the level. This proves important, as platforms can either be solid or passed through depending on your color and the color of the platform.

On top of these mechanics, you can also flip gravity as long as you're on the ground, and touching certain pixels causes the whole game world to rotate.

The combination of all of these different systems allows Pixel ru² to feature some dizzying puzzles and some frantic platforming. Jump, shoot an enemy, land, flip gravity, change color, fall through the floor, push this block over there, change direction, grab some score pickups, flip gravity again... it becomes almost like a carefully orchestrated dance when done properly. 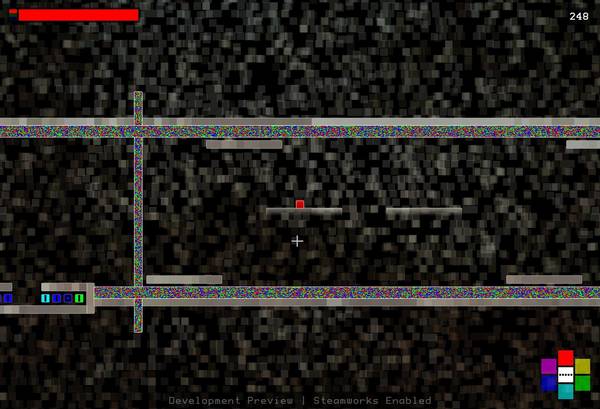 Although most levels will let you get by on your own pace, one of the current levels (Runtime Error) is a timed event that is fiendishly hard. Levels can be replayed for score, which is rapidly decreasing as time passes and whenever you bite it.

There's no final count on levels in the base game as of yet. In addition to whatever levels C63 cooks up, there's already Steam Workshop support and a level editor included.

A Story About My Pixel

Although the story has yet to be fleshed out in-game, Wolfenhex gave me a quick synopsis:

The game's story is about AI and the future of humanity. Our goal is to hint about a lot of the story throughout the game, either from text that pops up from the OS or through collecting the bonus data (bonus points) through the level. Each point is actually text that is flashing it's content in binary and our plan is that when you collect the point you see the text at the end of the level and unlock this whole hidden story as you play. 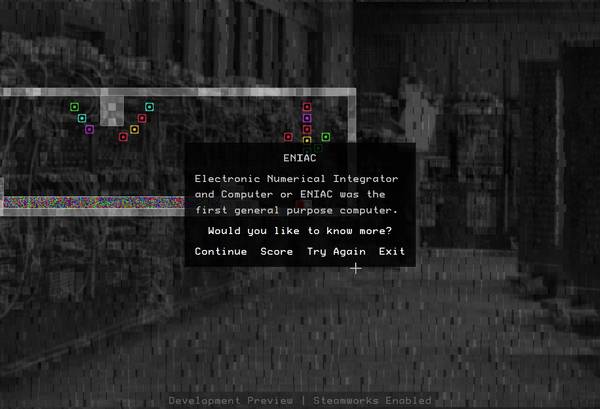 The background of each level is actually an image, but one that is represented in 3D space behind the level. The pixels don't properly align until you reach the exit, when the photo finally comes into focus. The images are educational in nature, as Wolfenhex explains:

We decided to use educational images relevant to the game's story because we just like the idea of it. We want to help educate people about things, but it's hard to make a fun game that focuses on education, so we focused on making a fun game that we added education to.

My co-conspirator EBongo described Pixel ru² as a truly geeky game - I believe his exact words were "If games were dice, Pixel ru² would be a d20." If you've got the platforming mettle to take it on, you can find Pixel ru² at its homepage as well as on Steam. There's even a free demo available!