Pixel People is my latest mobile addiction. If I had to categorize it, I'd say it's very similar to the Dragonvale "collectathon" model of free-to-play gaming. It's got some substantial improvements over Dragonvale, though. It can be somewhat hard to get into and fully understand, so I hope in this Pixel People guide I can share my top Pixel People tips and tricks to make your Pixel People-ing more rewarding.

The basic goal of the game is to collect all of the possible Pixel People. Each Pixel Person is a unique combination of two other Pixel People, which you create by Splicing the DNA of new clones that arrive. Thus, in order to collect more Pixel People, you've got to have a lot of clones. Clones require housing, and a workplace. Both housing and workplaces cost land. Workplaces produce coins over time, depending on how they're staffed. Land can be bought with coins. To summarize:

New clones will arrive only if you have houses available for them. To build new houses, tap anywhere that there isn't a building already. Then tap "Buildings" and then "Residential." You will be presented with a list of houses you have available to build. Pick one, and then tap anywhere to start building it. 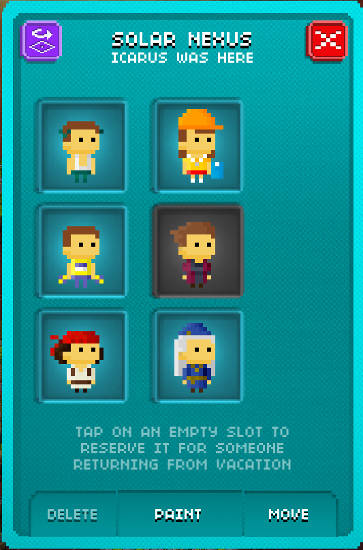 Pro Tip Don't worry if you put the house in the wrong spot. After it has been built, you can move any building you want by tapping on it and then tapping "Move" in the lower right. You've got infinite space, too. As you build or move buildings further out, more of the grid will show.

Warning! Once you've built a house, it's really hard to remove it. There are ways, but they are prohibitively expensive. In the early game, this isn't a big deal, since all your housing options are more or less equal. Later, though, when land is scarce, you may want to consider building houses that require Utopium, as they hold more Pixel People per unit of land invested.

If you have available houses, clones will steadily arrive at the Arrival Center. When a clone arrives at the Arrival Center, you can "splice" them to turn them into a productive member of your society. You do this by combining two Pixel People you've already discovered.

The more unique Pixel People you have, the more possible combinations you can make. A splice combo that yields a new Pixel Person will show a "pink" test tube, while ones you've already used are "yellow" and combos that don't work are marked with "gray." Unlike games like Dragonvale, a splice combo will always produce the same Pixel Person - there's no luck involved, and there's no chance you'll breed something new by repeatedly splicing the same DNA together. 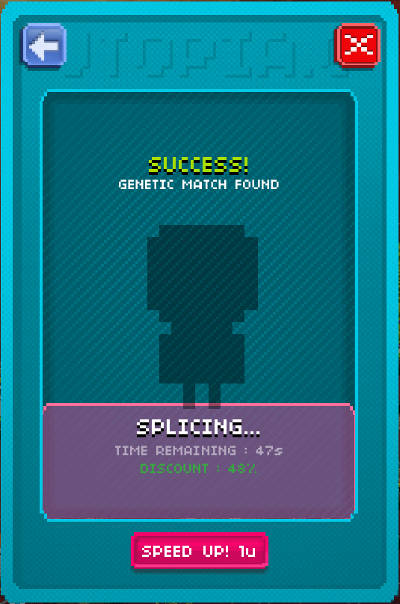 Pro Tip Typically you want to splice new clones into Pixel People you don't already have - the "major" goal of the game is to collect them all, so unique combinations are key. It's also generally a good idea to splice combinations that don't require land when you can. This helps boost your coins-per-second without costing you any land. Pixel People will stick around in the Arrival Center until they have a workplace, which can lead to situations where the Arrival Center is full and you can't get any new clones, despite having houses available.

When you splice a new Pixel Person, you may notice a "Land Required" line on the splice screen. When you see this, it means that splicing this clone requires you to build a new workplace. When the splice operation is finished, you'll be automatically prompted to start building this new workplace. Not all clones require new workplaces, though.

Pro Tip It's frequently better to splice Pixel People who don't require any new land if you can. Land is expensive, and later you'll unlock a building (Bank) that gives a bonus to the earning rate of workplaces that are completely full of clones. 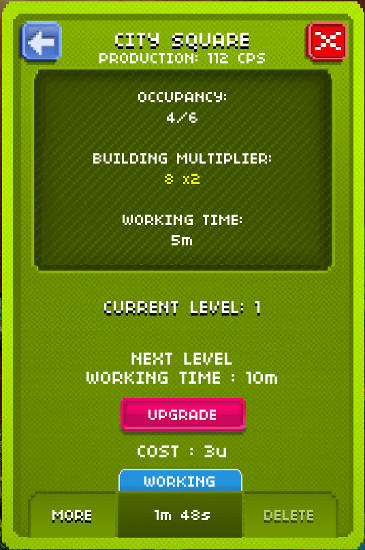 Every workplace has certain statistics that determine its usefulness. They are:

Pro Tip Buildings that are idle have a "lightning bolt" icon over them, and you must tap them again in order to start producing money. You can double the work time of a building with Utopium, although this gets expensive very quickly.

Related Some workplaces also have special features. Want to know what buildings are good to unlock early? That's covered in our Pixel People FAQ!

Once you've hit your Land limit, you'll need to Expand before you can build more houses or new workplaces. To do this, tap any blank square, and then tap Expand.

Expanding isn't too costly at first, but it quickly ramps up. It can take tens of millions of coins in order to get to some of the later levels. Although in the early game buying houses seems expensive, expanding is the primary way in which you'll spend money, and the primary reason why you'll want to get it. 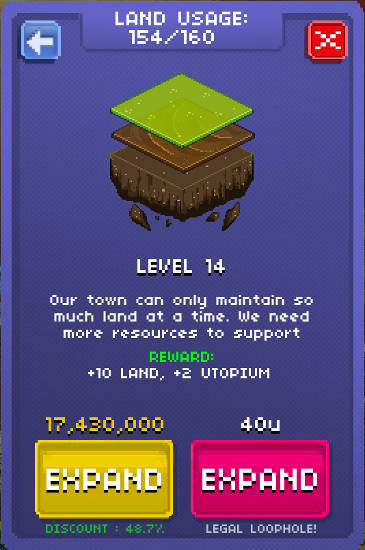 Expanding also levels up your city, and sometimes unlocks new buildings. It also gives you 1 or 2 free Utopium, although that's not that awesome.

Utopium is Pixel People's "premium currency." That means that although it's massively useful, you'll only get small quantities of it for free. The makers of the game hope that you'll want more Utopium enough that you'll pay actual cash money for it. 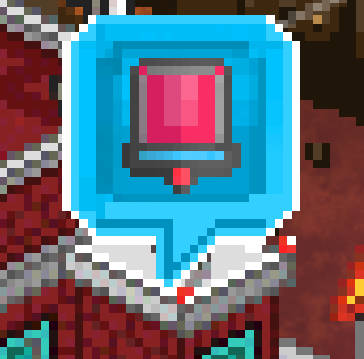 There are other miscellaneous things that Utopium is good for, but these are by and large the key ones.

Related Want to know how to get more Utopium, or what to spend it on? That's covered in our Pixel People FAQ.