Minecraft is one of the most popular games available worldwide, and it's especially popular among children. As a parent who is also an avid video game enthusiast, I've been letting my kids play Minecraft with me, and I've been encouraging other parents to do the same. Many times I find that parents don't know what Minecraft is, how it works, or if it's safe for their children. Is Minecraft for kids? In this guide, I'll go over the major questions parents have when their kids want to play Minecraft.

How do I get Minecraft and what does it cost?

Minecraft is available on several different platforms, with more on the way.

There are plans for PS4 and Xbox One versions as well. To date, there's been no Wii or Wii U version, but it's possible that one may arrive eventually.

The PC and mobile versions of Minecraft rarely go on sale, but the disc versions for Xbox 360 and PS3 can often be found cheaper.

Be very, very careful about "free" Minecraft offers. There are a ton of scams out there where sites will say "Get Minecraft for free! It totally works!" but these are scams. The only place to get Minecraft is from Mojang.

What version of Minecraft should I buy?

The various versions of Minecraft are quite different.

The PC version is the one with the most features, and it's also got the best support for gameplay modifications that keep the game fun long after the base game gets boring. However, you'll need one PC and one copy of the game per player. So if you've got 3 kids, and they all want to play together, you'll need 3 PCs and 3 copies of the game. This can make it the most costly version of all the options. 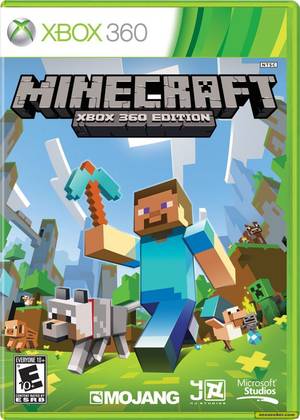 The Xbox 360 version and Playstation 3 version are significantly behind the PC version in terms of features. They are missing a bunch of the newer things added to Minecraft (like horses) and the size of the world is much, much smaller. In order to play online with other people on the Xbox 360 edition, you'll need to fork over an additional $60 a year per player for Xbox Live Gold.

However, if your kids are more comfortable using controllers, they'll probably feel more at home playing on a console. The crafting interface is much simpler, so kids won't have to memorize complex patterns in order to build things. Also, the console versions feature split screen on high-def TVs for up to four players, so you only need one copy of the game, one console, and four controllers for four people to play together.

The Pocket Edition for iOS and Android is even further stripped down from the console edition. It's okay for playing on a tablet, but it's a bit rough playing it on a phone. If your kids generally spend their play time on tablets, it might be worth a look.

Is Minecraft safe for kids?

Generally speaking, yes. For the most part, playing Minecraft is about as dangerous as playing with a set of toy blocks.

There are a few things you might want to consider, though.

Minecraft can be an online game. Do your kids play Minecraft online with other people? If they do, the standard precautions about chat rooms and online strangers applies. Since there are so many kids who enjoy Minecraft, it's not far fetched to say that unsavory elements might use the game to target children. It's possible for other people to say or do objectionable things to your kids while they play online. Some online Minecraft servers may ask for money, or attempt to scam money or personal information from people. As with any other online activity, parental supervision is advised.

Minecraft can sometimes be scary for children. The enemies your kids may encounter include groaning zombies, giant spiders, exploding creepers, and skeletons. One of the goals of the game is to travel through something called the "Nether," which is a fiery inferno, to get to someplace called "The End" to fight an enormous dragon. It's all presented in a very blocky, pixelated manner, but it can still be intense for kids.

Minecraft can encourage violence towards animals. The only way to get certain resources is to kill cows and pigs, for instance. My 3 year old finds punching cows to be hilarious. I found his enthusiasm mildly disturbing. During our playtime, I've tried to encourage him to be nice to the animals instead. While it's easy to dismiss this sort of thing, I'd hate to see him chase down our cat and hit her because we encouraged that kind of reaction towards animals through Minecraft. That said, I did play a lot of Super Mario Bros. as a kid, and I have not once stomped on a turtle to try and earn points.

Again, here, Minecraft is about as educational as playing with a set of toy blocks. It can teach children many lessons about exploring, basic math, and building things. It encourages free-form creativity and essentially gives kids a limitless "block world" to play with.

Minecraft has a "survival" mode, but for the most part this teaches you nothing about survival. The first step in survival mode is generally punching a tree until you have enough wood to make sticks. It's important in survival mode to build a shelter before the first day ends, as giant spiders and skeletons will attack you otherwise. Obviously, this is not particularly useful information to have.

Likewise, its physics are unusual and not really representative of the real world. For instance, with most blocks, you can stack blocks up and remove the lower blocks, after which the upper blocks will hang in midair. A single bucket's worth of water will create an infinitely tall waterfall.

To kind of summarize, Minecraft is not educational in the way you might think of other forms of educational kids entertainment. Minecraft won't teach life lessons or hand hold preschoolers through basic math, reading, or writing. It is more like a creative toy than a tailored educational experience.

My kids really enjoy Minecraft, what kinds of Minecraft-related stuff is there?

Owing to the popularity of Minecraft, there are a lot of clones out on the market. I've played a few, but I can't really recommend these to anyone, as Minecraft itself is very complex, a fact that many of the clones fail to reproduce.

Tons and tons of modifications ("mods") for Minecraft exist. These run the gamut from simple graphical changes to complete overhauls and additions of massive amounts of content. Like I mentioned above, most of these are for the PC version of the game. The console versions don't support mods at all.

One similar game to Minecraft that I can recommend is Terraria. It is available for PC, consoles, and for phones/tablets. It is 2D where Minecraft is 3D, but otherwise it shares many of the same characteristics.

If your kids get really into Minecraft, you might be interested in getting some Minecraft merchandise. My son has said he wants a "Minecraft birthday party" this year, for example. I've compiled a list of interesting Minecraft gifts and toys in preparation for his party:

There's a bunch more Minecraft merchandise over at Amazon that you can browse through as well.