Max out your Halo 4 XP and specialization ranks with 4 times the XP! 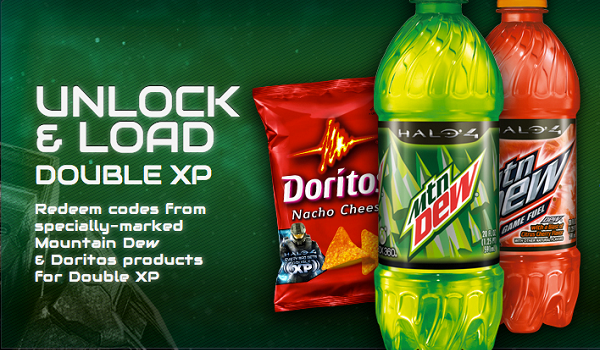 Hmm, a lifetime of diabetes and enough MSG to kill a horse, but OMG FREE XP!!!

Not sure how to fully utilize your Mtn Dew Double XP? Just looking to rank up your shiny new "Specialization Priority Alpha" specializations faster? Look no further!

Mountain Dew (or "Mtn Dew" if you prefer) and Doritos are once again running a promotion that rewards folks with double XP tokens. These tokens can be used in any multiplayer matchmaking mode - both the "standard" War Games matchmaking and Spartan Ops matchmaking. They don't count anywhere else. Unlike last year's similar MW3 promo, you can't just arbitrarily assign tokens to gamertags. You've got to connect to Facebook or Xbox LIVE to use/share a token.

Bear in mind that there are bonuses for entering Mtn Dew and Doritos codes at the same time. So, if you've got a bunch of one and your buddy has a bunch of the other, trade and you'll both come out ahead.

The worst-kept secret in Halo 4 for gaining XP and ranks quickly is Spartan Ops. Playing Spartan Ops in matchmaking with a Mtn Dew double XP token, you get 4X the XP - easily almost 12,000 XP per Op. However, there's a lot of misinformation and other BS floating around out there. Let's get the facts straight:

The best op to play is the one that ends the fastest, since there's no benefit for length or overall kills to be had. Which Op is fastest depends on what type of combat you're good at. However, it's typically a good idea to pay attention to the number of people playing each Op - more people playing means that there's a halfway decent chance that the op they're playing is this week's XP "farm spot."

Personally, I prefer the ones that don't make me rely on Warthogs or BRs to get kills, but your mileage may vary. I tend to prefer the ones with Rhinos or Wraiths, although there's a couple of Ops that have infinitely regenerating power weapons in the weapon racks - check after a couple of minutes to see if that Rocket Launcher has respawned! If you create a class with the "Ammo" support upgrade, you can carry 8 rockets or 25 fuel rod rounds in reserve. This can make the ops go faster, since a rocket will tend to one or two shot a Knight or Elite.

If you're not going to be at your box for a while, and you want some free XP, leave your game running Forge Mode. This will max out at around 800 XP in half an hour, but if you've got other things to do, you can easily gain a few thousand XP by occasionally ending and restarting the game. You don't have to actually do anything in Forge Mode in order to gain this bonus XP.

War Games is a hard one to recommend - what you are good at determines your XP gains, honestly. I'd focus on game modes where you can get a lot of kills quickly. I prefer Big Team Infinity Slayer, since I tend to end up with a power weapon or a vehicle and getting a lot of kills/multikills/etc. Grifball is probably going to make an appearance one of these days, and it's relatively easy to dominate and get kills quickly with the hammer if you're halfway decent.

The challenges in this game are fairly laughable. I wouldn't invest time in trying to do any of the more difficult campaign challenges, for instance. ~4k XP for solo'ing a level on Legendary? No thank you. Even if you never died and ran full-tilt through the level (and good luck with THAT strategy) you'd still be spending enough time that you could have run 2 or 3 Spartan Ops, easily. If there's some easy one to get in War Games, sometimes I'll load up a game mode, but if it takes more than one round, your XP per time invested is probably shot.

The commendations are similarly pointless. There aren't any Campaign-farmable ones like in Reach (Target Locator, anyone?), and the Ops mode doesn't make it easy to focus on a particular enemy type. In short, ignore commendations for the XP. If you're just super crazy about some armor unlock, hey, go for it. I'll be over here, not frustrating myself trying to farm Knight Battlewagons.