Mark of the Ninja - Stealth: Streamlined and Simplified. 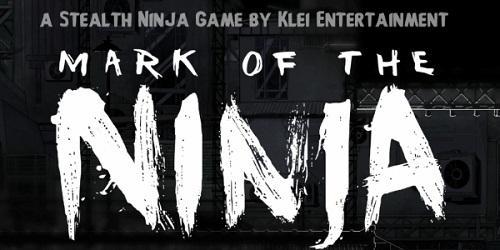 I'm a fan of the stealth game "subgenre" or whatever you want to call it. I wouldn't call myself a stealth game "expert," but "veteran" might be appropriate. I've played every Thief, Splinter Cell, and Assassin's Creed game, and I typically play games that give you a choice (ie, Skyrim or Deus Ex) stealthy whenever possible. However, I usually end up reloading over and over again to get everything just right, which can take a dozen tries or more for some of the trickier situations.

I understand that this turns a lot of people off. EB, for example, got roped into playing Splinter Cell: Conviction with me in co-op. At one point, I was sneakily offing several guards while hanging from a railing in total darkness when all the alarms went off. Then I heard EB laughing, while his character shouted "I NEED SOME HELP OVER HERE!" When I showed up, he was standing above a swarm of enemies, crazily weilding an AK-47, and dutifully reenacting the climax of Scarface. A long sigh, several facepalms, and innumerable retries later, we cleared the game. But I could see the appeal of occasionally cutting loose. Stealth games are typically tense and require precision, and punish failure swiftly and harshly.

That's why it's so refreshing to see a game break the mold, like Mark of the Ninja. If I had to describe it in a sentence, I'd call it a 2D stealth game in the mold of recent Batman games and their "Predator" segments. Mark of the Ninja removes a lot of roadblocks, and gives you not only a lot of freedom to explore various methods of completing objectives, but it also manages to make experimentation fun and painless. 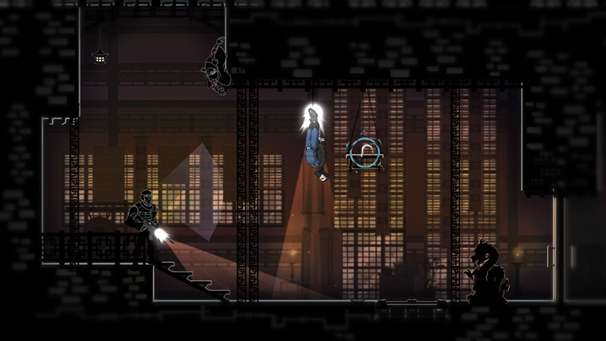 The guards have captured my fellow ninja! The blue circle means I can grapple to that point, but my ninja will pass through the light, making him visible to the guard, if only momentarily. A better strategy might be to jump to the other side of the wall, and kill the guard first.

There are a lot of well-crafted systems in play which make this all possible:

Most games I play once and then toss aside. Some games I'm willing to go the extra mile on and get all the achievements. It's rare, though, for me to play through a game, then go back for the achievements and find myself not taking the path of least resistance. Throughout my New Game+ run, I could have cut corners and not been sneaky, ignored guards, or avoid optional objectives. But I found myself still having fun, even though I'd already completed the game more or less perfectly. 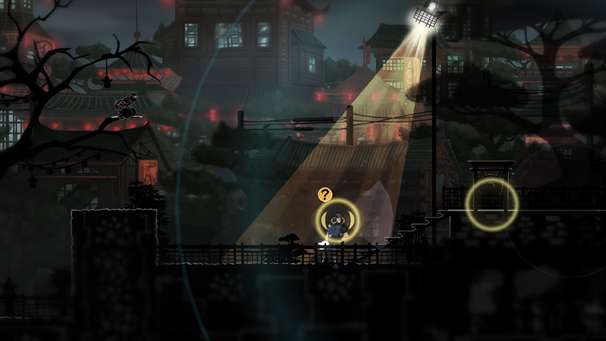 Using a dart, it's possible to make noise that will distract a guard, so you can either slip by unnoticed, or drop down behind him for the kill.

For a single player game, with only score attack to maintain replay value, to grab me in such a way and make me want more is an unusual feat, to say the least. The game's not without it's flaws, it's a bit easy, and there's even a few minor bugs, but all of this good can't be erased by a few minor nitpicks. The bottom line is, if you like stealth games, you can't go wrong picking up Mark of the Ninja. It's simply an outstanding game.

Right now it's an Xbox Live Arcade exclusive title, but word on the street is a Steam version is imminent.