Back in January, we checked out the LucidSound booth at PAX South. If you missed that coverage, go get caught up! LucidSound is a relatively new name in gaming-grade audio devices, but as I mentioned in our PAX South coverage, these guys have been working in gaming audio for quite some time now, previously under the Tritton brand name. That pedigree would give the impression that the LS30 is going to be more polished than you'd expect a first offering to be. Now that we've got our hands on a pair of LS30's, let's put them through their paces in this LucidSound LS30 review! 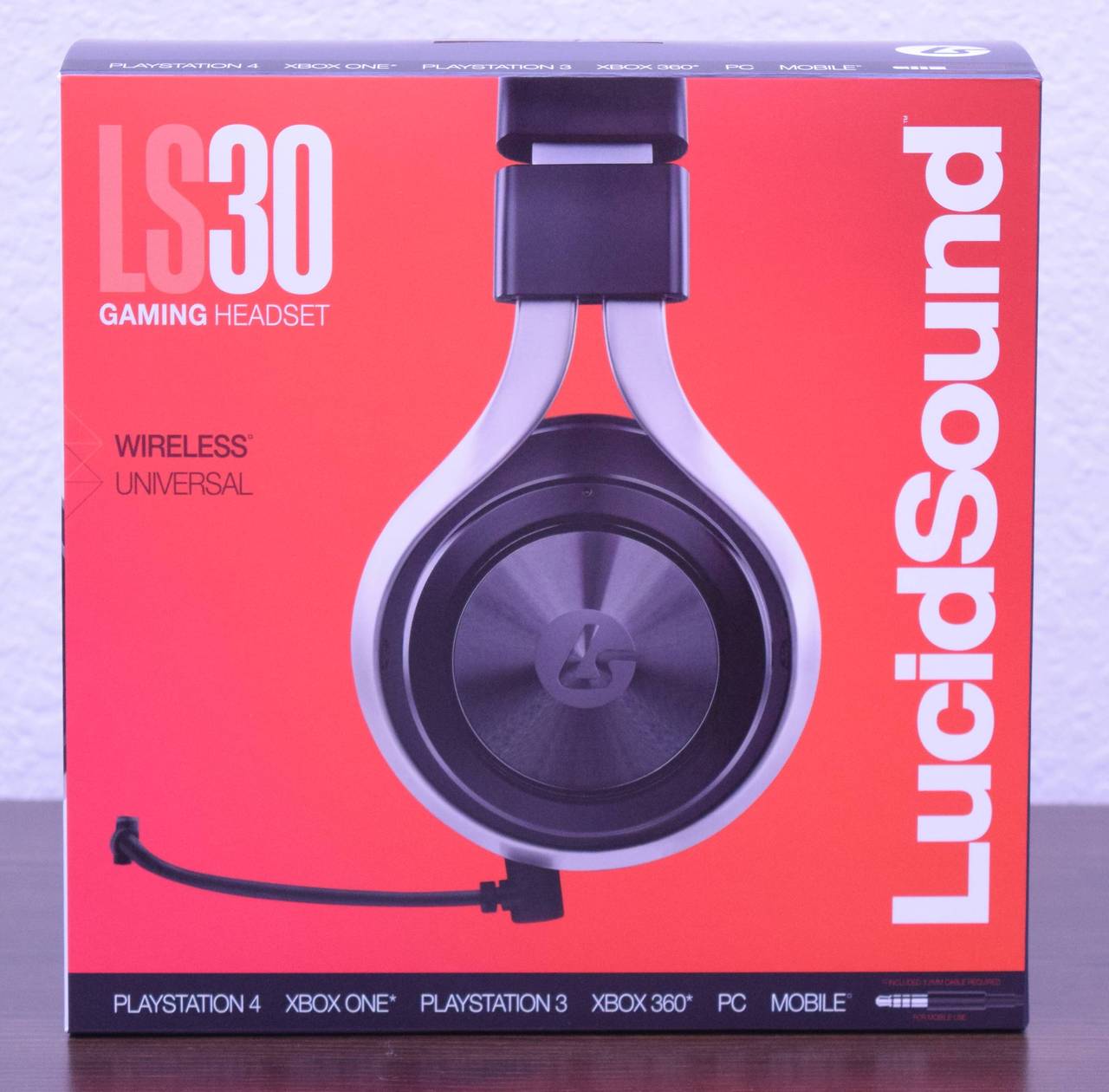 The LS30 is the "midrange" offering from LucidSound. It has full wireless support for PC and console gaming, unlike the low end, wired LS20. The LS30 is lacking the LS40's 7.1 surround sound, and its higher end custom memory foam ear cups. 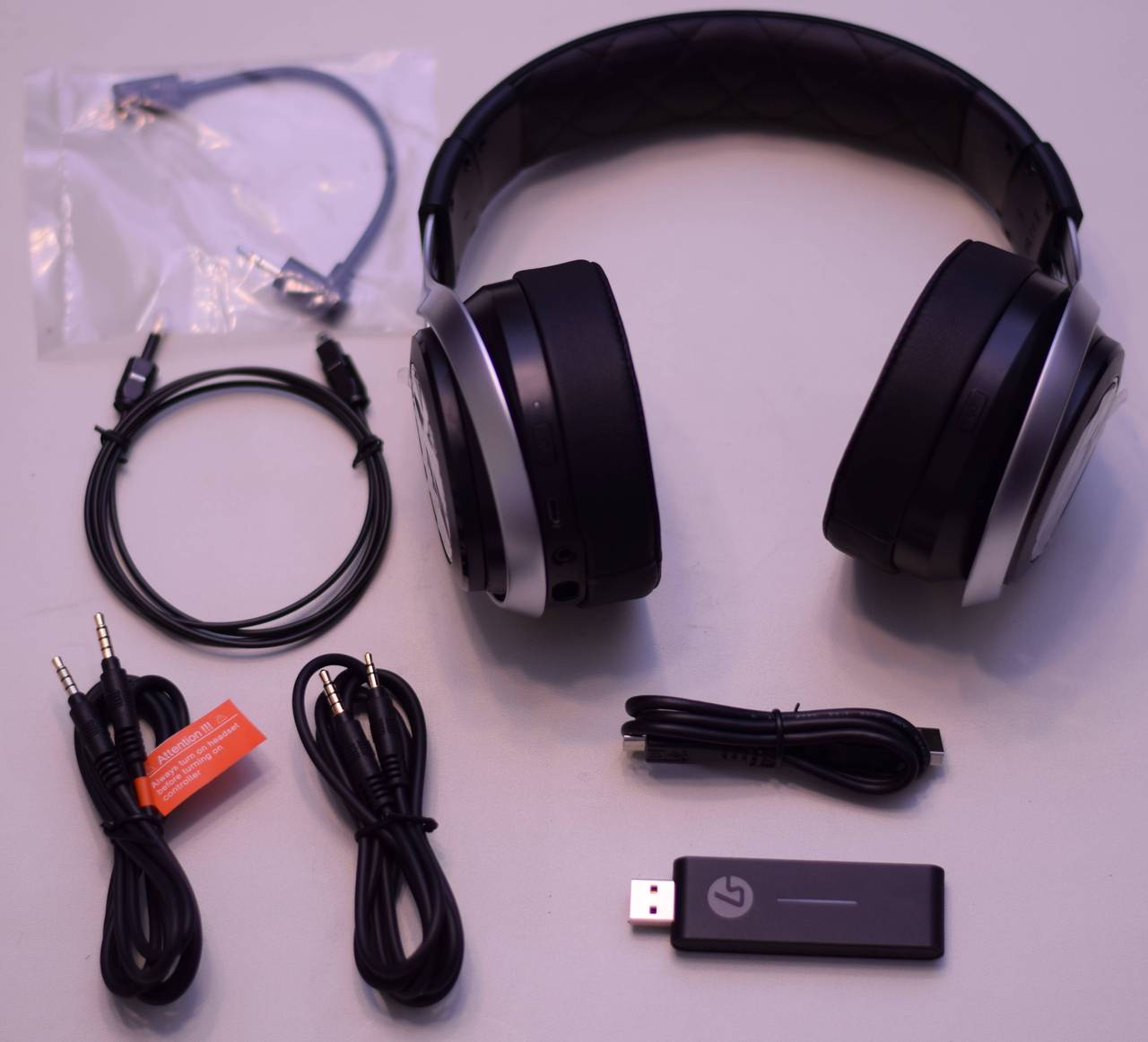 The LS30 connects to consoles and PC via a USB wireless sound card that LucidSound calls the "base station." Audio data appears to flow to the base station via USB for PC, but for consoles USB appears to just be for power. To get audio, you'll also be plugging in an optical cable between the base station and the back of the console. If you're playing on an Xbox 360 or Xbox One, chat audio flows through a wire between your controller and the headset. You could argue that this makes it less wireless (I mean, c'mon, there's a wire...) but most of the Xbox headsets I've seen require a connection between the controller and the headset for game chat to function.

On the PC, the USB base station shows up as two audio devices - one for game audio and one for chat audio. If you use an audio chat program that supports choosing audio outputs, you can use the chat volume functionality just like you would on a console. I don't think I've seen this before, and it's really a smart differentiator to the LS30 over most wired headsets especially. Just make sure you pick the right playback option in the Sound control panel - the chat audio is mono only!

In addition to the digital USB audio in, the LS30 also supports wired analog audio via a 3.5mm jack. In this mode, the headset doesn't require any other cables or power to function. This is the only option you'll have if you're playing audio from a device that doesn't have USB and/or digital optical out - from your phone, for instance. The 3.5mm interface supports call control functionality for cell phones, though.

Bluetooth seems like an obvious omission from a wireless headset, but from what I gather in talking to LucidSound CEO Chris Von Huben at PAX South, the decision to go with a proprietary wireless standard stems from a desire for maximum audio quality. Bluetooth audio is compressed, which often leads to a poor listening experience. LucidSound's implementation sends full fidelity audio from your device to the headset, minimizing any possible quality loss.

I'm a big fan of being able to control my headset without having to mess with my device settings. For the Xbox One in particular, controlling chat vs game volume is often a painful experience involving the Xbox One settings, the game's settings, and tweaks to my device's controls. Thankfully, LucidSound's LS30 headset integrates all the controls you need in an intuitive manner. 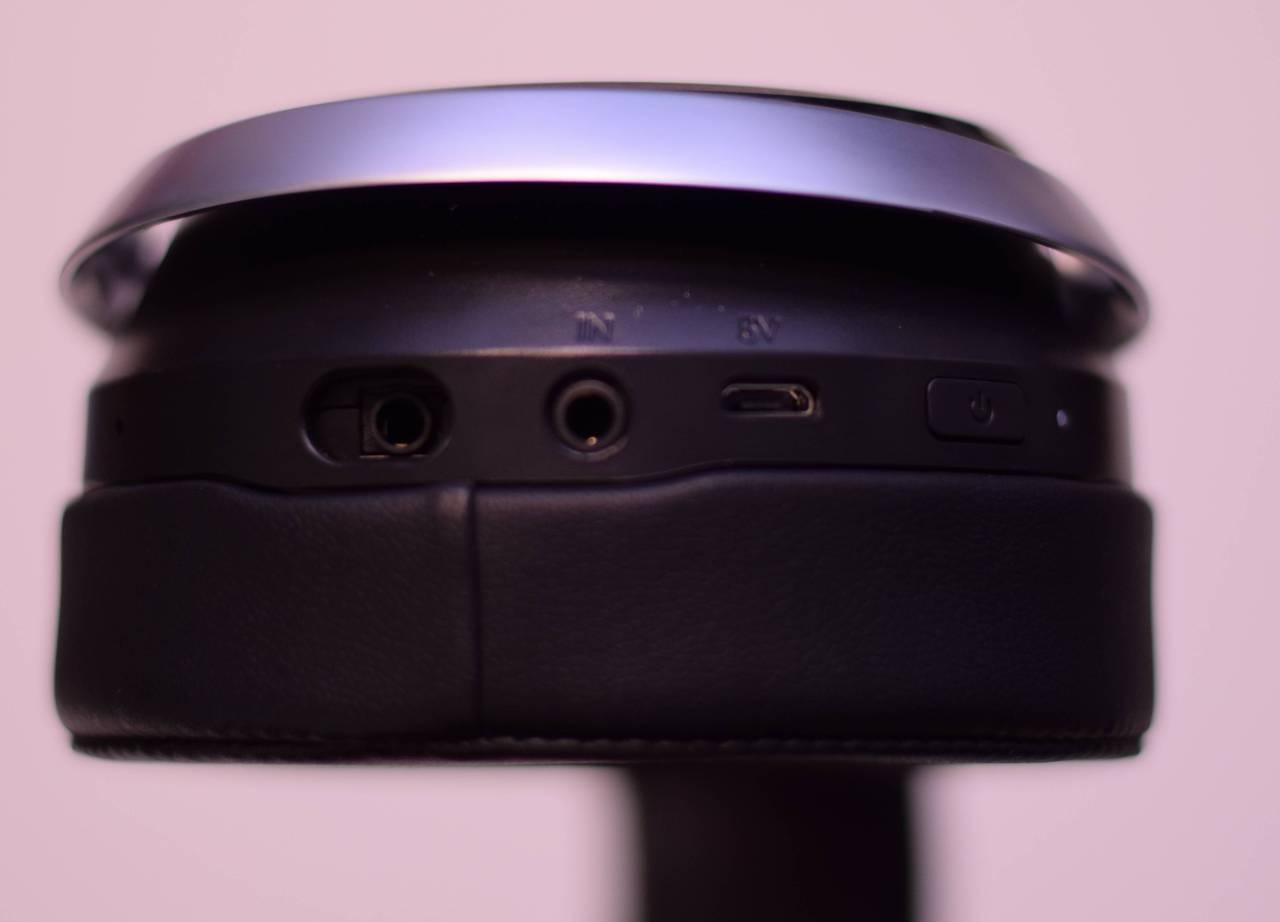 There's a series of buttons and connectors along the bottom of the ear cups. While most of these are pretty standard, two things stand out. One is that there's an "EQ" button for switching between normal, bass boost, and treble boost modes. There's not any sort of fine control here, but the difference between the three modes is definitely noticeable. The other interesting thing here is the boom mic port - it's technically optional. There's a built-in mic that provides decent audio quality without having to mess around with having the extra bulk of the boom. The boom mic does have a mute LED that is pretty nice, though.

Meanwhile, the outer shell of each ear cup is actually where the integrated volume and mute controls are. The LucidSound logo panels are big buttons that can be pressed to mute game volume (on the left side) or chat volume (on the right side). When the chat volume is muted, a blue LED lights on the end of the mic boom. The ring around the logo twists to control the volume of that side's audio.

A couple of small nits to pick here - the mic connects on the left side, but the chat volume controls are on the right side. This means that the mute indicator and mute button are on opposite sides, which I find a bit weird. The other thing I'm a bit skeptical of is the mute LED. I tend to keep my mic on mute a lot of the time, and I found the brightness of the LED so close to my eyes to be a bit much. I could always unplug the boom when I plan on spending a lot of time on mute, and maybe I'll just get used to the light over time, but making this feature optional somehow would be better for me.

The LS30 headset is an over-ear design with a pretty standard size adjustable headband. The visible parts of the band and ear cup supports are made of anodized aluminum, which gives the LS30 significant durability without weight.

The ear cup material is a faux leather around soft foam. The cups themselves are big enough that I can fit my entire ear inside without pinching or smashing it against my head, but it's a close thing. The headband doesn't have a lot of give, so the fit feels a bit tight, but not uncomfortably so. There's a bit of rotation between the band and the cups that allows the cups to adjust to the slope of your head and distribute the pressure of the headset a bit more evenly.

My (extremely small headed) wife couldn't adjust the headband small enough to fit her comfortably, and the cups didn't really adjust far enough that it sealed well against her head. She is notorious for having difficulty finding headsets due to her head size, so if you similarly have trouble with "one size fits all" headsets, I'd suggest checking the fit before you jump in. 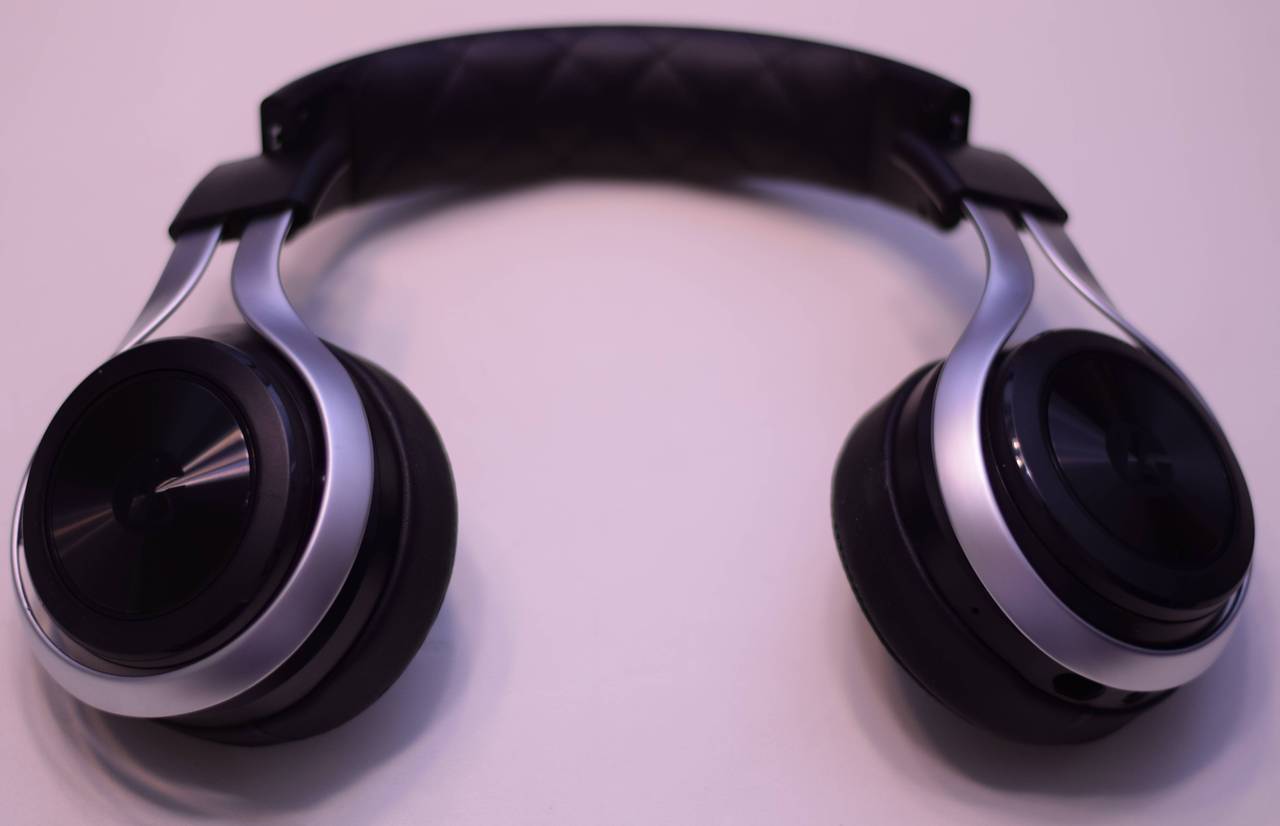 The LS30's cups can also rotate to the point where they sit comfortably against your chest for times when you're carrying the headset around your neck. They don't rotate fully to where the cups would lay flat on a table, though.

It's clear that the LS30's were designed to buck the industry standard design for "gaming headset." The anodized aluminum frame, plus details like the stitching, the placement of the buttons/controls, and the overall build quality of the set scream "lifestyle" instead of "l33t gamer d00d."

LS30's come equipped with 50mm drivers, which provide excellent audio quality across a wide range of applications. Music playback was crystal clear with well defined bass. I didn't hear any distortion or odd audio artifacts. I also loaded up Dishonored 2 and tested the LS30 against my HyperX Cloud Revolver. Both headsets performed well, and there wasn't a clear victor in terms of positional audio or immersiveness.

On the audio input side, the boom mic is clearly the better option. It did a good job of picking up my voice, even when I was talking quietly. The built-in mic is no slouch, but by design it has to pick up a lot more of the audio from your environment than you might want.

The mic monitoring to me is a bit of a mixed bag. I like being able to hear what's going on around me, and being aware of my voice volume is frequently useful. However, I do wish I could turn it off. Sometimes I brush up against the mic or exhale loudly while there's no game chat, and I really don't need to hear that. Between the mic monitoring and the blue LED mute, it's clear that the LS30 was designed for people who spend the majority of their gaming time chatting with others.