Kerbal Space Program (XB1) Review - Not Because They Are Easy

Kerbal Space Program (often abbreviated KSP) is a rocketry and space simulation game that has been available in some form or another for the last 5 years. On PCs, Kerbal Space Program has been out of Early Access since April 2015. Now a console version of KSP is available for both PS4 and Xbox One. I got a review code for the Xbox One version, and after spending some quality time with a few Kerbals, I'm ready to weigh in. Stand by for launch - here comes my Kerbal Space Program Xbox One review.

Kerbal Space Program is a complex, rather realistic simulation of the physics of rocketry and orbital mechanics. In it, your goal is to launch brave (and/or stupid) Kerbals into space and have them explore the solar system they inhabit. Depending on the mode you choose, Kerbal Space Program can be a sandbox for experimentation, or a more challenging space center simulation with research, budgets, missions, and other factors to consider.

Since Kerbal Space Program is such a huge game, I can't really "beat it" before writing a review if I want that review to come out before the heat death of the universe. Thus, I stopped to write this review after completing all the tutorials and starting my own game, successfully launching a rocket that went to the Mun and landed safely.

Kerbal Space Program is divided into several different pieces. The two major ones are designing new spacecraft and piloting those craft to accomplish whatever goals you feel like making. 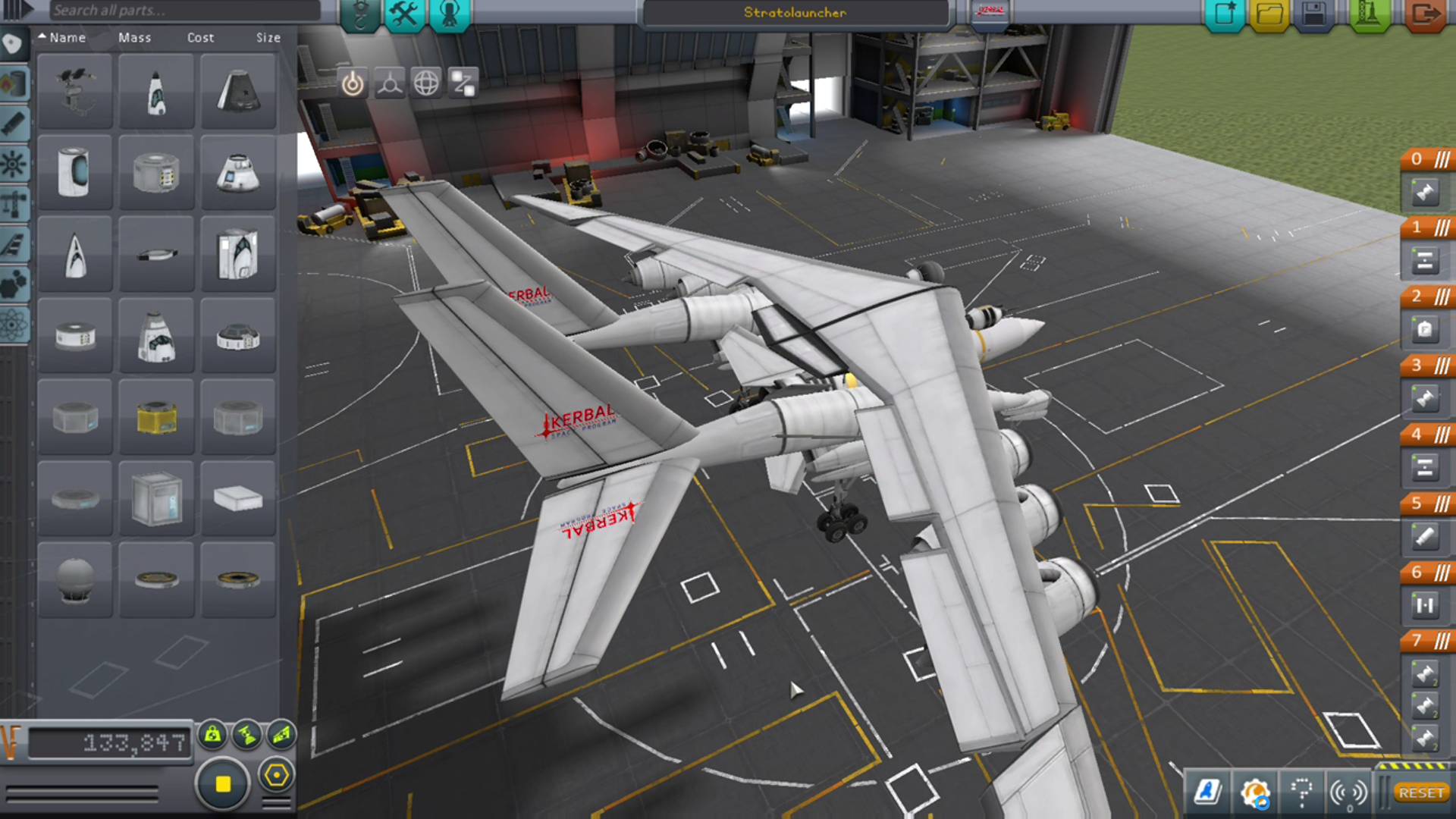 The Vehicle Assembly Building and Spaceplane Hangar are where you'll be designing your spacecraft. Craft can be assembled by snapping parts together, and then organizing those parts into stages that can be deployed during flight. There are a few starter designs in each building, but making your own is just a matter of snapping the various parts together in whatever arrangement works for you (and hopefully flies...).

Once you've assembled your space craft, you can wheel it out to launch it. From here, you can take direct control of the craft, determining when to burn engines and what direction to fly. There's a sort of autopilot that can assist you in keeping the craft pointed in certain directions, or just stabilizing the flight and keeping you from overshooting turns or spinning out of control.

From here, the sky's the limit! Well, I guess the sky's not really much of a limit, considering the fact that you're strapping into a giant rocket... 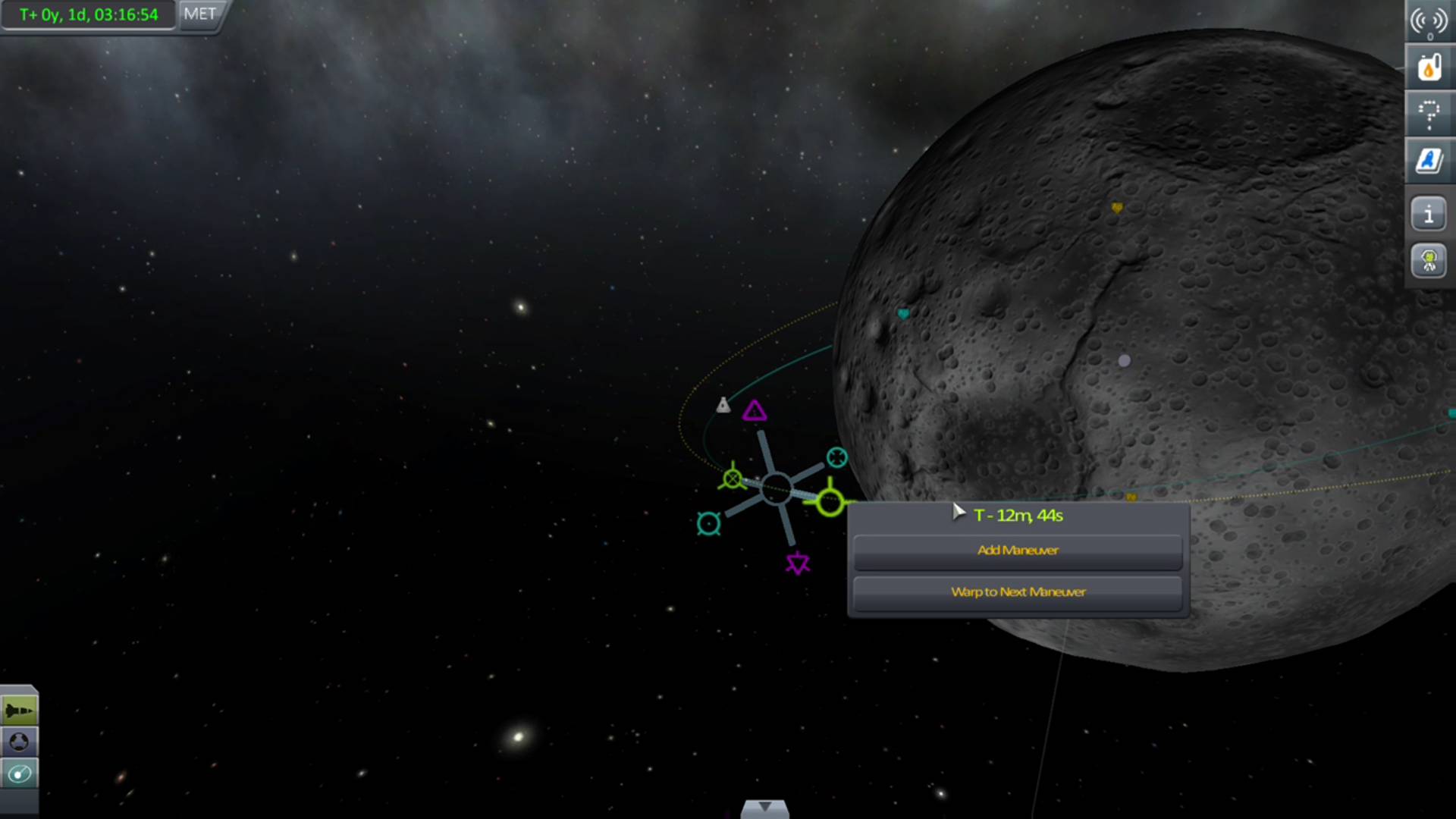 From here, the edge of known space is the limit! With a good knowledge of physics and orbital mechanics you can go anywhere you like. You can establish orbit over Kerbin (KSP's Earth), and then set a course for the nearby moon (fittingly named the Mun), or any of the other planets and moons in the solar system. You can enter orbit around another planet or object, and land on it if you want to. Send your kerbonauts out to explore, plant a flag, claim a whole swath of otherworldly goodness! 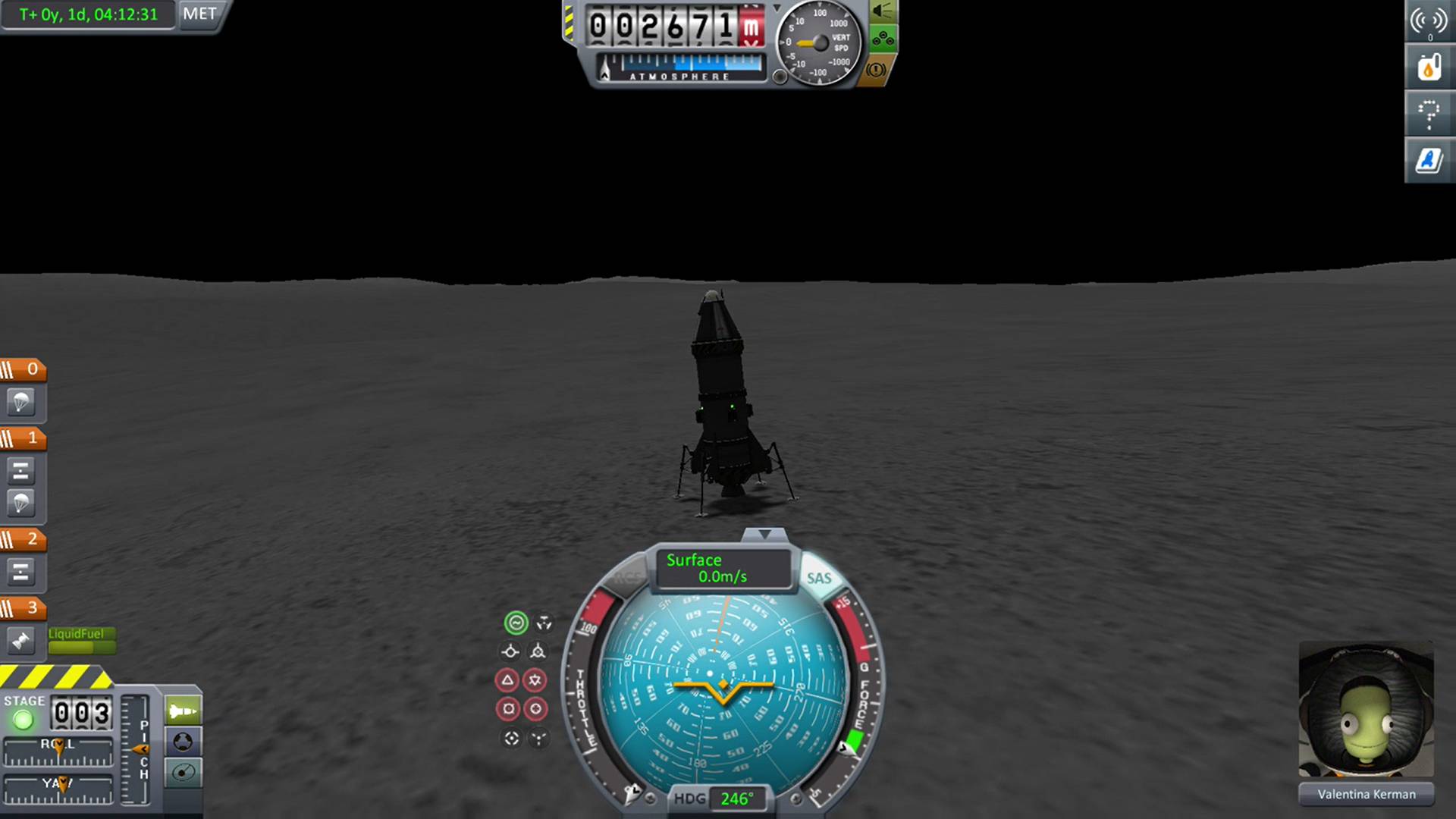 The physics might be daunting to new players - there's a lot of terminology and precision required to understand it all. For instance, in order to get into orbit, you've got to max out your thrust until you're going around 100 m/s relative to Kerbin's surface. Then you've got to perform a gravity turn to get into an orbital trajectory. Next, at your apoapsis, burn prograde to move your periapsis up until you're in a circular orbit.

Now you can add a maneuver node to intercept another stellar body. Burn prograde again to move your craft into the sphere of influence of the other object, and then when you arrive, burn retrograde to get into a tight orbit. From here, you can move your periapsis close to the surface, then burn retrograde to execute the reverse operation of the gravity turn to exit Kerbin atmosphere. Then, slow to a safe landing velocity and touch down, hopefully on your lander's legs.

But that's just the start! If you want to get home, you'll probably have to do an orbital rendezvous with the engine you left in orbit before maneuvering back into Kerbin orbit, descending through the atmosphere, and deploying the parachute to stop yourself before you splat into the ground or water.

Oh, and keep an eye on your fuel. Chances are you're going to run out and strand someone someplace in the cold, dark reaches of space.

# You Lost Me at "Apoapsis" 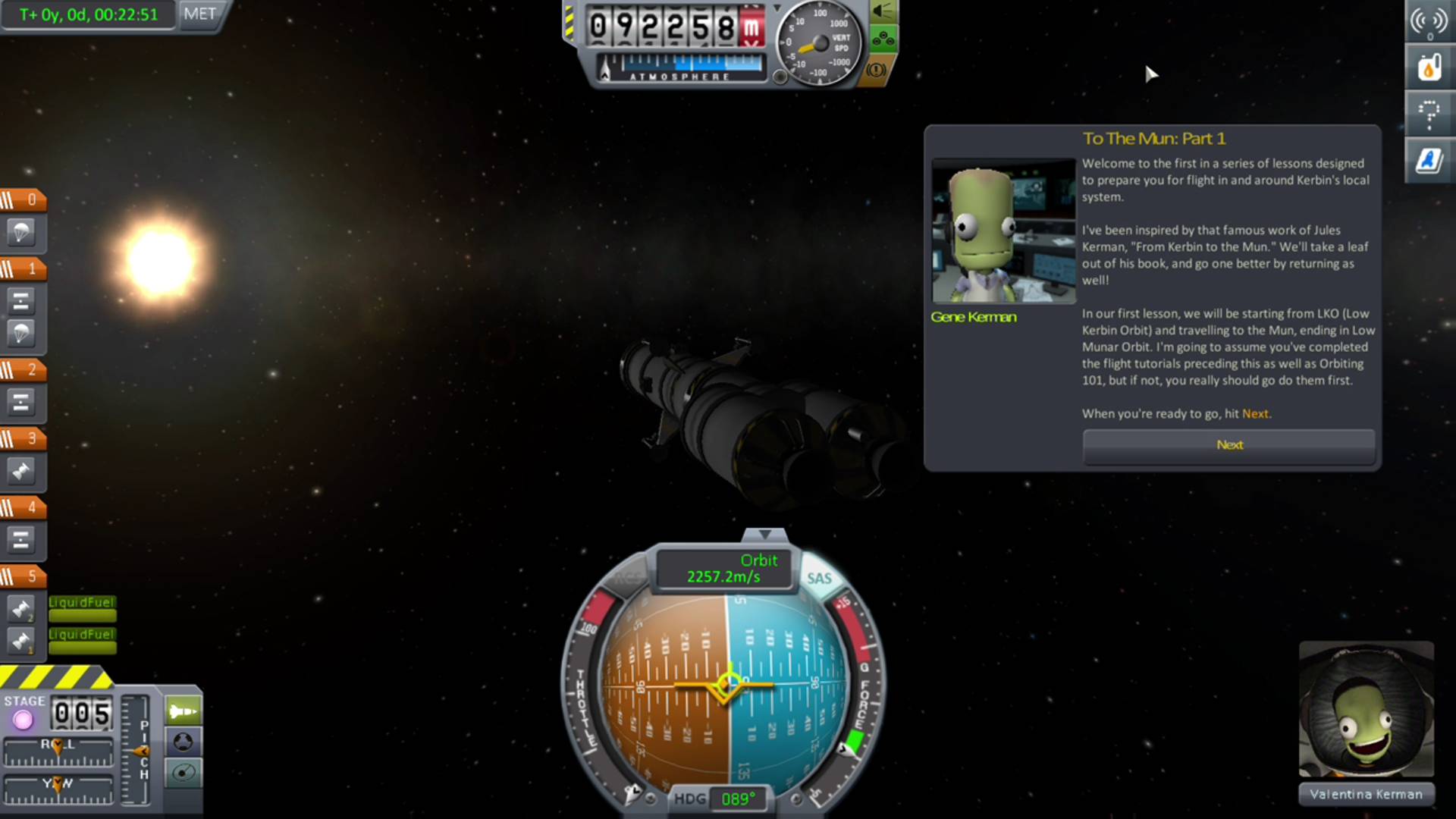 If this all sounds a bit daunting, have hope! There's a whole set of tutorials in-game that walk you through some of the more complicated maneuvers that make up most of the major activities in the game. In its early days, Kerbal Space Program was more about trial and error - you could spend weeks just trying to land on the Mun, for instance. These tutorials speed that process up considerably, and within a few hours you should understand the basic steps required to get there.

For "trial-and-error purists," these tutorials may seem like they shortcut a lot of the challenge of Kerbal Space Program, and perhaps rob players of some of the feelings of accomplishment you get from finally nailing a tricky sequence of steps. On the other hand, these tutorials don't do a perfect job of explaining things or holding your hand. Some of them I had to repeat a bunch of times before I figured out the parts I wasn't being told, or before I was able to figure out precisely what the directions were telling me to do.

# What's Different in the Xbox One Version of Kerbal Space Program?

All of this is basically stock Kerbal Space Program. If you've never played it before, hopefully you get the basics of the game. What is probably interesting to most people is "should I buy the PC version or the Xbox One version?"

The Xbox One version is basically a straight-up port of the PC version. There's not a lot of new stuff added that I could determine. The base feature set seems identical between the two. One notable addition is Xbox achievements, which is kind of surprising considering the devs don't seem to think achievements in KSP are a good idea. 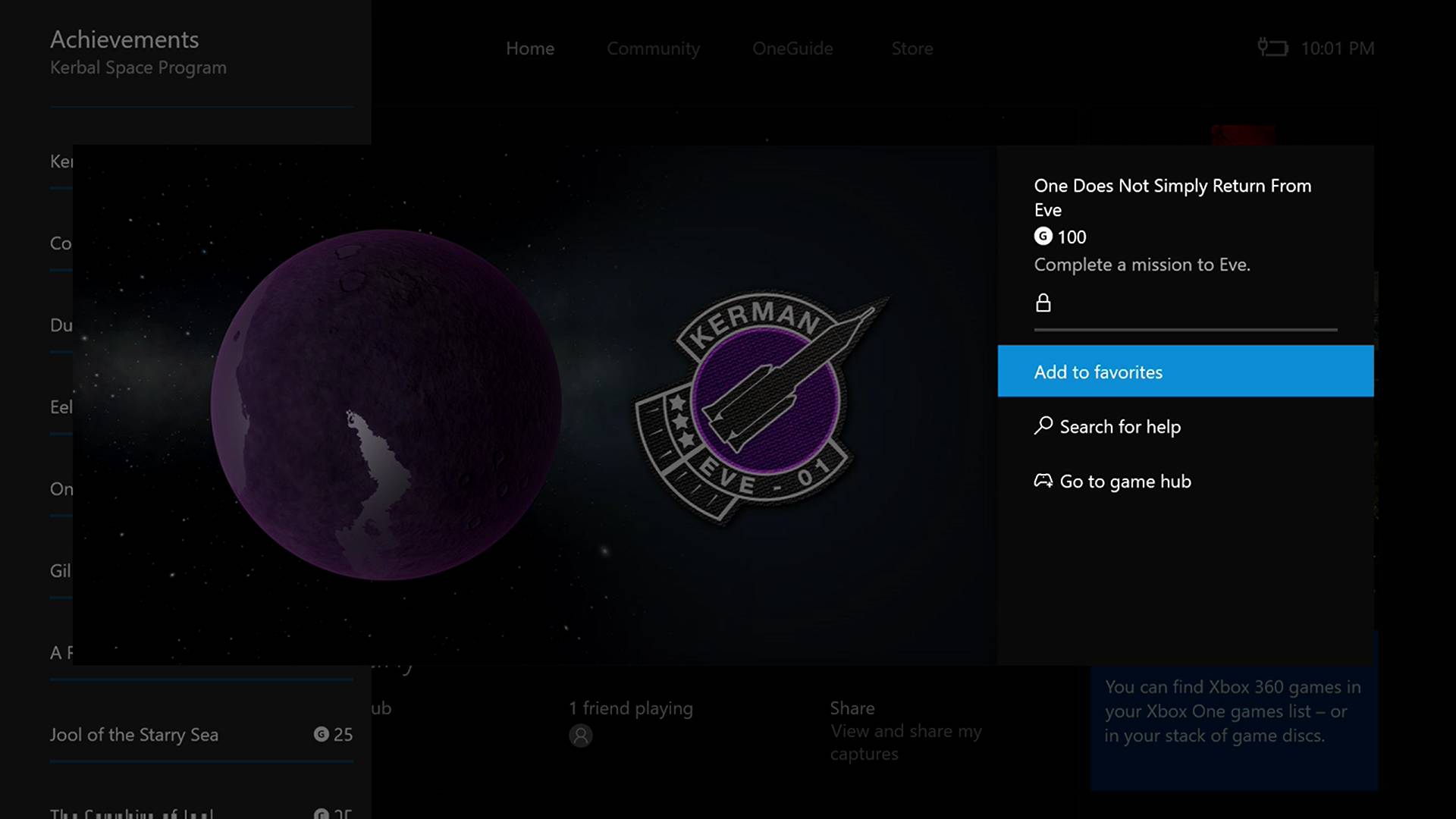 This being a straight up port, Kerbal Space Program still seems optimized for higher resolution displays and keyboard/mouse input. Many of the tutorials pop up windows that cover most of the screen, and sometimes obscure important informational dialogs. The text can sometimes be small and fuzzy at TV viewing distances. Reliance on the controller for input is occasionally frustrating when trying to make precise movements, or when multiple actions are bound to the same button when pressed in different combinations/ways.

A lot of this can be worked around, for instance the popup text blocks can be moved by moving the cursor over them and holding the A button. Holding one of the bumper buttons down slows the cursor movement, which makes precise movements a bit easier. I figured a lot of these things out on my own, although there is a "help" function that shows the button bindings while flying.

Another concern is how often the Xbox One version gets updated relative to the PC version. Right now, the Xbox One version is at 1.1.0 where the PC version is on 1.1.3. That's not nearly as bad as some games (Team Fortress 2, I'm looking at you...), but keeping it updated is going to be a long term problem. We won't know what the patch landscape looks like until months or even years from now.

Yet another thing to consider is mod support. Right now there doesn't seem to be support for mods in the Xbox One version of Kerbal Space Program, which locks a lot of community-created content out from Xbox One players. Xbox One has mods on other games - like Fallout 4, so perhaps this is a feature that will eventually be possible. However, I can't find any official word on when or if this is planned. 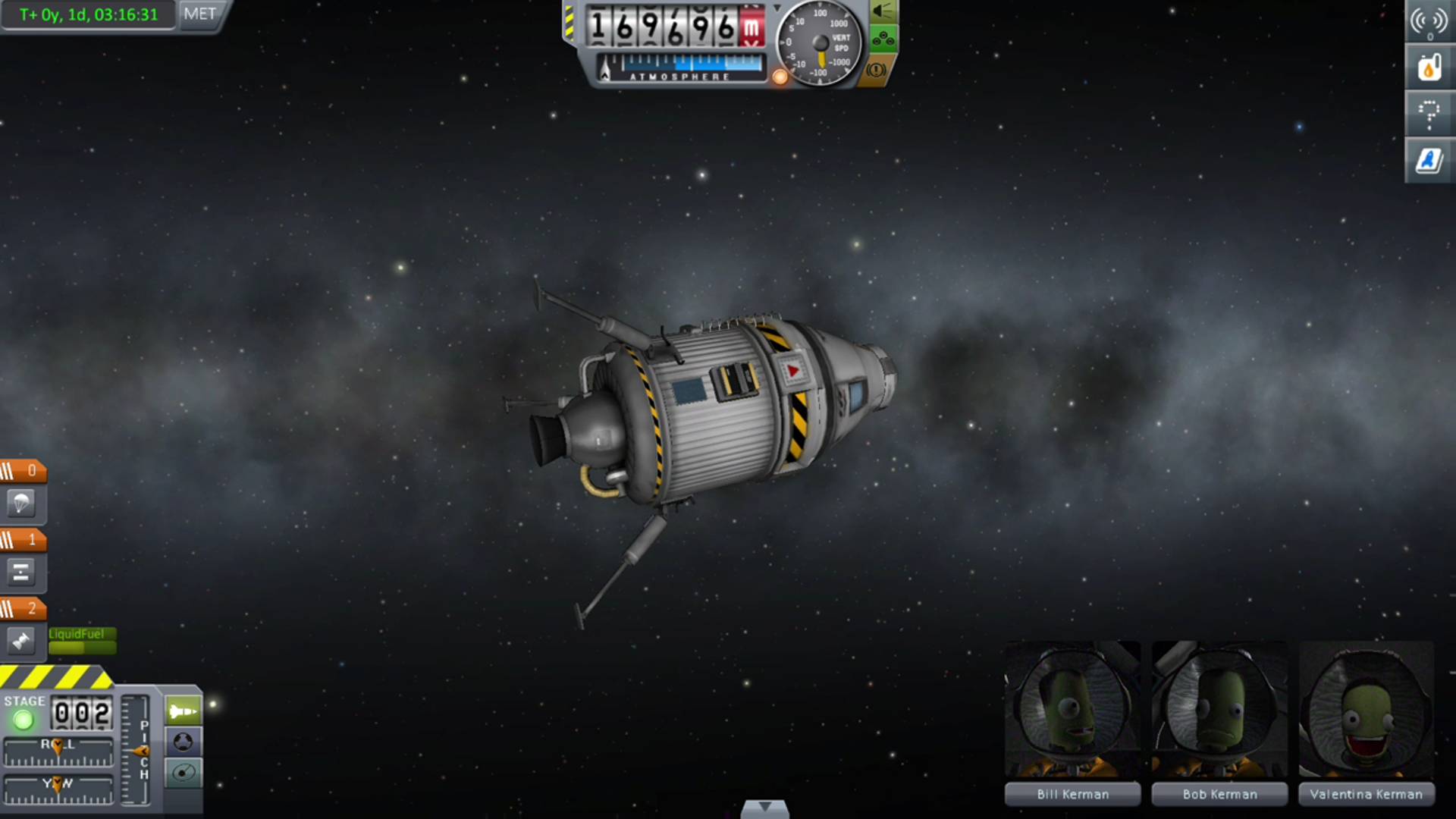 Performance-wise, the Xbox One version isn't without its share of issues. While flying, I often experienced a lot of frame drops and lag when switching to and from the map. I've had the game crash on me one time, and ran into a few glitches where stuff like auto-warping and maneuver settings didn't work until I exited the game and reloaded. Given that Kerbal Space Program is a game that is still being actively developed, a bug or two isn't that surprising. I can't say it seriously negatively impacted my experiences. However, depending on the aforementioned post-launch patch support, it's not clear what the timetable is for bugfixes.