Jotun is an action game steeped in Norse mythology featuring vast wilderness exploring sections and massive boss fights. Join the warrior Thora, who has died an inglorious death and must prove herself to the gods in order to enter Valhalla. Her trial - 5 massive Jotun ("giants") - awaits!

I met the developers of Jotun at the Media Indie Exchange Booth at SxSW Gaming 2015, and they graciously provided a review copy of the game to play. 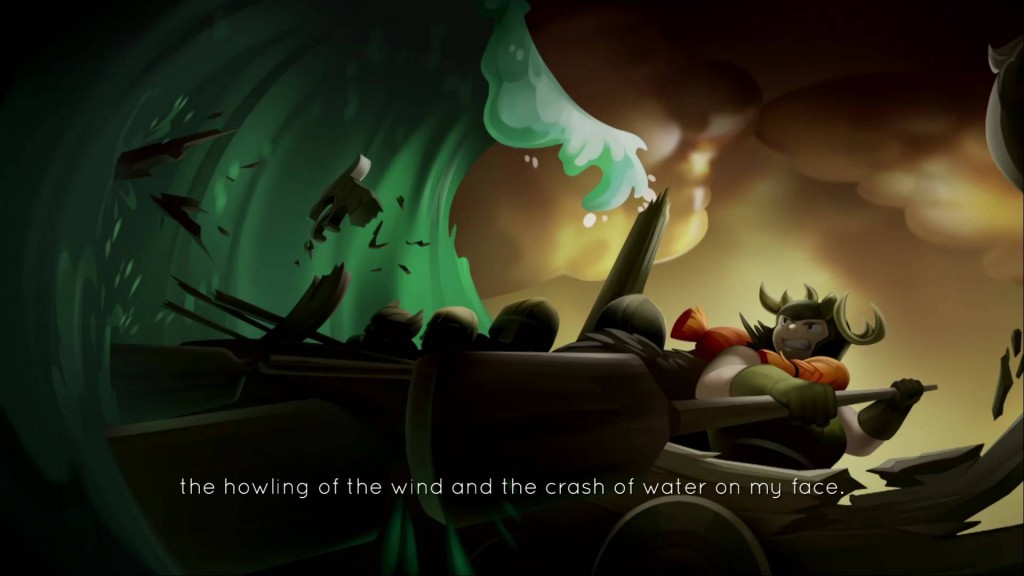 Jotun tells the story of Thora, a noble Viking warrior who faced many trials to bring glory to her tribe. A bit of bad luck led to her dying at sea rather than in glorious battle, which apparently the gods aren't so understanding about. She's been tasked with gathering a pair of runes from the dominion of each of 5 unique Jotun, and then facing against that Jotun in honorable combat.

Thora is definitely out of her depth in Jotun. She's a mere mortal caught in the eternal struggle between the gods (ie, Odin) and the giants. Their realm looms large over her - she's barely the size of a pebble or a twig in the giants' domain.

WOTS on YouTube We previewed the alpha build, watch us play here:

Despite Thora's diminutive size, she's packing a ton of power. Thora's axe is always at the ready, and she can swing it quickly or charge up and unleash a devastating blow - this charge attack is key to solving several puzzles. She's also something of an atypical female video game protagonist. She wears actual armor (no bikinis here), is never in need of rescue despite the high level of overall peril, and she faces her challenges with stoic confidence. 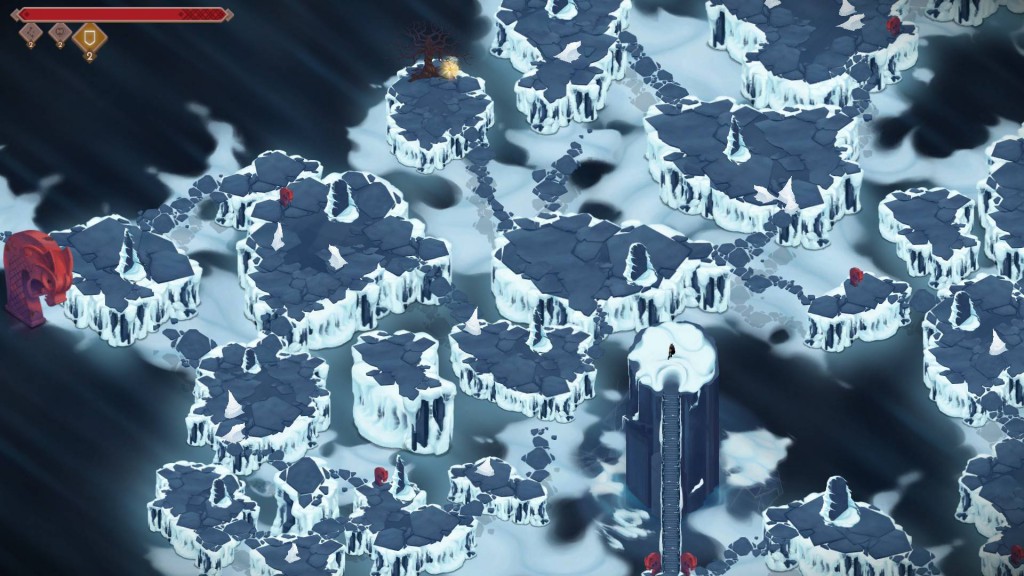 Each of the two runes you have to find before facing a Jotun can only be found deep within one of the realms that Jotun controls. Each of these levels is a sprawling, often mazelike environment with various hazards and some small puzzles to overcome.

Now's a good a time as any to start gushing about the art - the realms in Jotun are nothing short of breathtaking. There were multiple levels that I just went "Wow" at the first time I entered them. It feels like a work of art come to life. 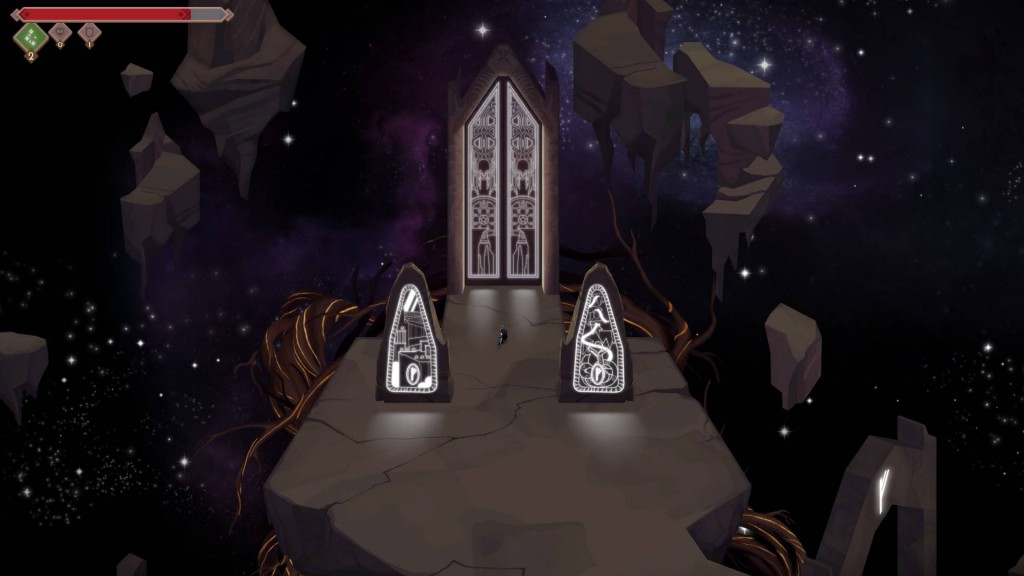 Thora herself animates so fluidly that it's almost lifelike, and I never got bored of just watching her move. Jotun really plays well with its scale - Thora is tiny, while the environments are huge. Sometimes Jotun pulls in close to show Thora in detail, but then pulls back to show just how tiny she is in comparison to what she is exploring or fighting. 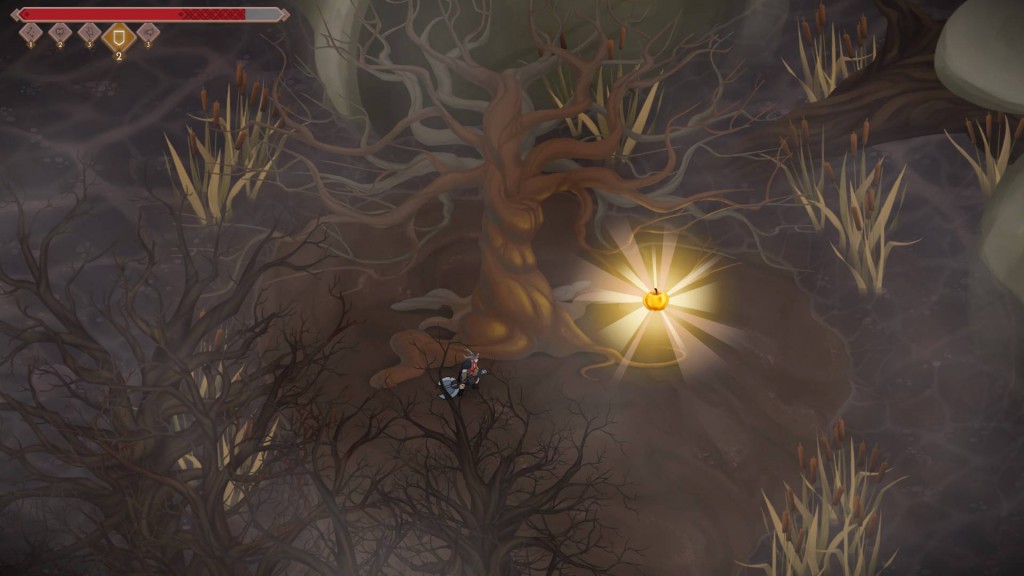 In addition to finding the two runes, the various realms also have shrines and golden apples to collect. These items are optional, but the shrines give Thora god-powers to call upon, and the apples boost her life meter. Thus, they can make the game a bit easier if you take the time to track them down.

Pro Tip Each realm has a minimap, but Jotun doesn't put Thora's location on it, so sussing out exactly where you are isn't a trivial matter. The map also shows the location of the power shrines and whether or not you've been to them. It doesn't show the golden apples, though - you'll have to figure those out on your own!

The music is also worth noting - there's a unique track for each area that compliments the theme of the realm. The boss music is suitably epic, and seems like it could easily belong in a summer blockbuster's climactic scene.

Here There Be Giants

After braving the two realms and finding the two runes, it's time to fight a Jotun. These are Jotun's boss fights, and they are as epic as any boss fight you'll find in any other game, bar none. Jotun's boss fights stand alongside the bosses in classic games like Shadow of the Colossus. Each fight is unique, memorable, and challenging. 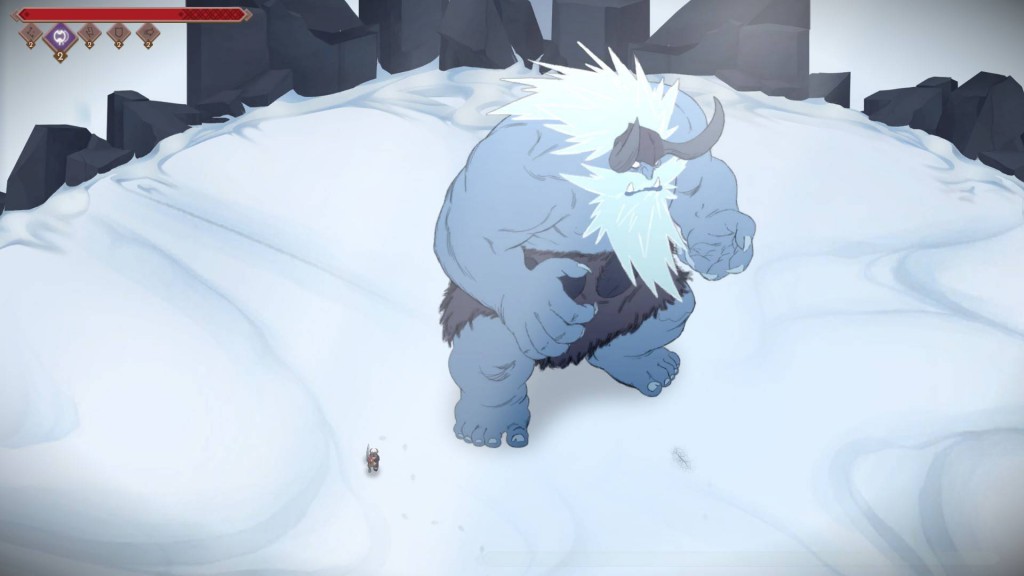 Difficulty-wise, fighting a Jotun isn't quite to Dark Souls hard, but it's certainly difficult - maybe Super Meat Boy hard. Most of the Jotun I fought 3 or 4 times before I beat them, although towards the end things ramped up even harder and I had to retry a dozen or more times to win.

Pro Tip Try to save your powers for the last third of the boss fights. Getting a clear shot on a Jotun late in the battle can be difficult, and being able to just power through it makes things easier.

Here again, the art and animation for the Jotun are unbelievably good. They each feel like they have their own personality, and it would be fun just to watch them move around, if they weren't constantly trying to kill you.

There are a total of 5 Jotun to conquer, which means 10 rune levels plus 5 boss fights to play through before you reach the final area. I'd estimate an average playtime between 4 and 8 hours total, depending on how long the bosses trip you up.

I was slightly disappointed by the ending - it was quite short considering the amount of difficulty I had reaching it. I wish Thora and I got to celebrate a bit more, I guess.

I also wish I had more Jotun to play. I don't mean that as a criticism of the length of the game - I think it's got good length and is satisfyingly meaty. I'm just already ready to pre-order the sequel.