Inside Out Thought Bubbles Review: I'm Bubbling with Joy 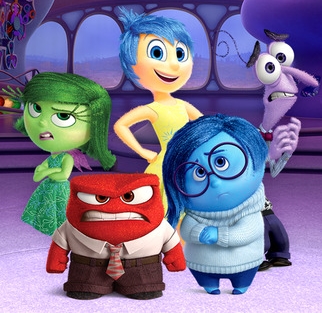 Ok, let's be honest... a lot of IP tie in games are shovelware. They either are ridiculously lacking in polish, or they just aren't fun. Inside Out Thought Bubbles bucks that trend with an enjoyable rethinking of King's Bubble Witch Saga and (Bobble Bobble before it). Thought Bubbles that lacks most of the poisonous barbs of a F2P game, and yet is is fun and has pleasant, uplifting art in keeping with its source IP. I actually played the game before seeing the movie in the theater, and I had no problem getting into it just because I didn't know the plot. I will note that I usually play mobile games with the sound off, but after having seen Inside Out I was invested enough in the characters that I was interested to hear them talk. They do not disappoint - and while just a touch repetitive, I love hearing phrases from each of the included characters. 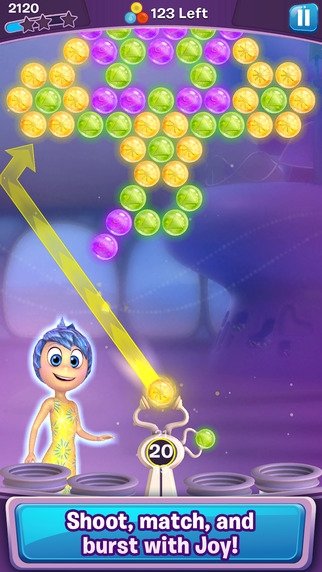 Thought Bubbles contains a lot of interesting tweaks to the bubble popping playbook, that while not revolutionary, do keep you coming back for more. Each "emotion" character has a special ability, and a short way into the game you unlock a second and later a third emotion. Only one character is active in a level per attempt which adds an extra dimension to the gameplay as you must often choose which emotion to use. There are also plenty of different bubble popping objectives and obstacles. Most are probably what you've seen in other similar titles, but they are well integrated with the IP, and when layers with the emotions mechanic they contribute to a pleasant variety. With only three of the five emotions from the movie featured in the game, there is decent hope that additional emotions may be added in a future expansion if the game is successful. 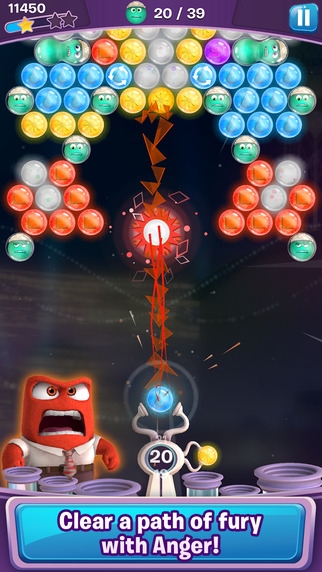 There are some drawbacks to Thought Bubbles, but its hard to find them that offensive given the antics of this games most recognized competition. The game occasionally makes you go through the "use this power up" tutorials, and that means in the hands of the young at these specific points its possible to get lost in menus and frustrated. I should note, that like any F2P game, I recommend locking down your device so that your kids can't rack up charges on Daddy's credit card. In addition, there are certain levels that are near impossible with one of the emotions, and in general the games difficulty ramps in higher levels to a point that most kids won't have the control to overcome. I don't find these things that much of a bother because the game is free, and its a puzzle game so I just expect the higher levels to be tougher.