Infinium Strike Review: To Infinium & Beyond

Infinium Strike puts you in the captain's chair of humanity's last hope - the battlecarrier Freedom Strike. Aliens, man. It's always aliens. They've come to destroy us, like for reals. Us puny humans have mostly lost the war, but we managed to discover the secrets of a material called "Infinium" that has all sorts of nifty properties. With it, we're able to strike back (get it?) and perhaps deal a killing blow to the Wrog. If tower-defense games keep you up all night, you really should learn more about Infinium Strike. Lucky for you, we're just about to start my Infinium Strike review!

Tower defense games are another broad genre with a lot of different gameplay tweaks that can make games feel significantly different from one another. Infinium Strike's take on this formula is that your job is to defend the Freedom Strike by outfitting its various weapon hardpoints on the fly, from salvage you find from destroying Wrog ships. Wave after wave of Wrog are incoming, and the only thing stopping them is Freedom's defenses. 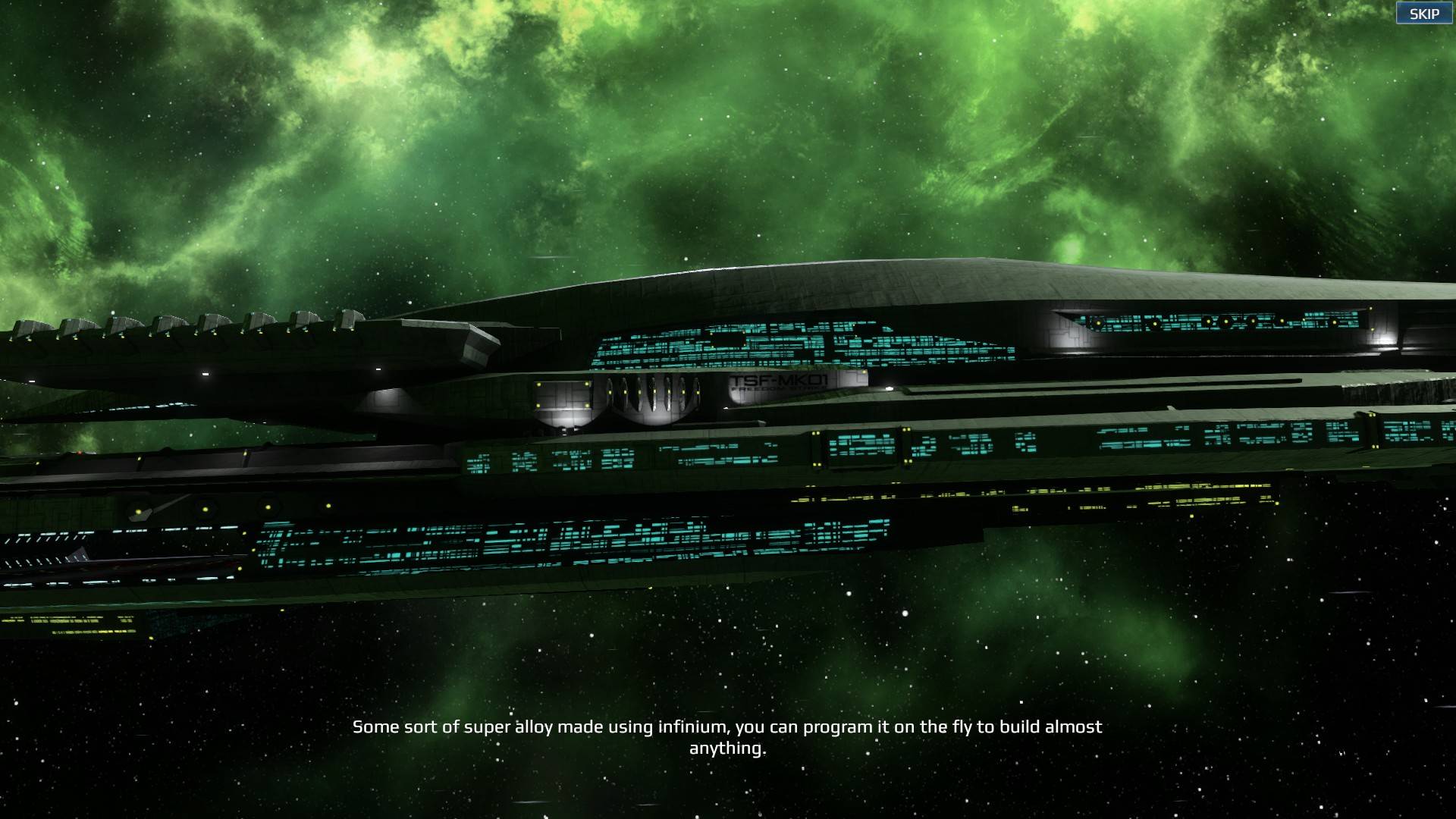 There are a lot of cool tactical options in Infinium Strike. In addition to choosing your defensive turrets from a set of around 10 different, unique options, there's a lot of other elements to consider. For instance, as you level Freedom Strike up, you unlock various "TSF SuperTech" abilities. These abilities each have a cooldown, but are otherwise free to use. They can really save your bacon in a tricky firefight by taking the pressure off or restoring your defenses. Properly timing the "Super Salvage" ability is also key to keeping ahead of the power curve.

Additionally, there are "fleet points" that accumulate over time, which can be traded in to launch drones to help deal with stubborn enemies and incoming projectiles. If you let these accumulate, you can use them to upgrade your drones, making them cheaper and more effective. Knowing when to stockpile and when to deploy can make or break a Wrog invasion.

The turrets themselves each have a "sector" they're capable of being effective in, and the Freedom Strike is divided into four quadrants. This means there's technically 12 zones of engagement. Wrog ships warp in from sector 3, and move towards the ship until they reach their desired combat range. Some weapons can hit multiple sectors, while some prefer a particular type of ship. If two or more of the same type of turret are placed together, they do bonus damage. Strategic deployment of defenses is therefore critical. 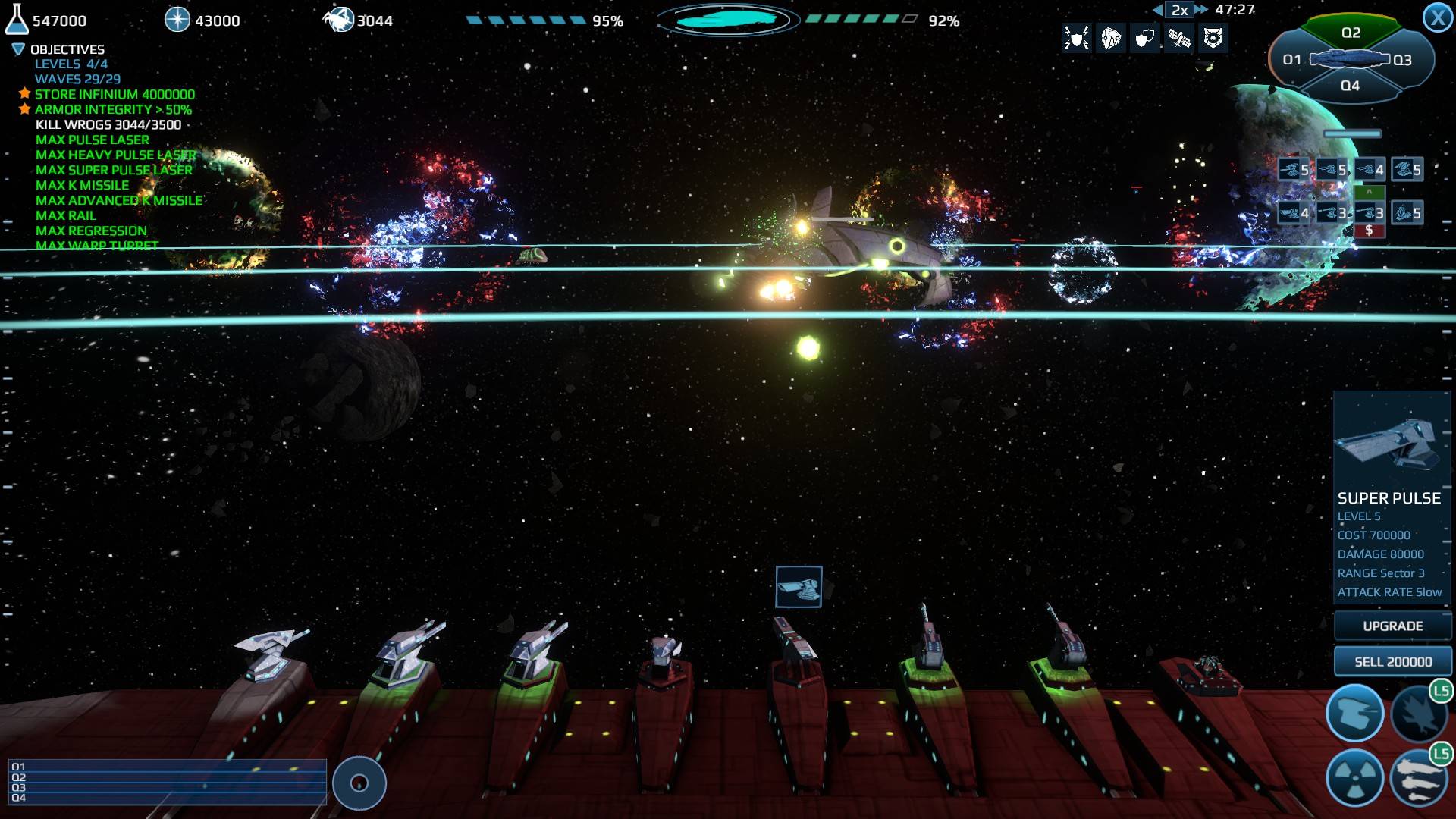 All of this, blended together, makes for a very satisfying and deep tower defense experience. There are a lot of interesting tradeoffs to consider, and many different strategies to employ. To its credit, Infinium Strike's UI does a good job of keeping you apprised of Freedom Strike's status and what is going on in each sector. I never felt overwhelmed by the amount of information it provided, and getting into the groove with the various HUD indicators makes the game feel manageable.

However, I've got some complaints to level at Infinium Strike. One thing I'll get out of the way is that the campaign is really rather short. There's only 10 levels, although there are three difficulty settings. I guess you could say there are 30 then, but that's a bit of a stretch for me. Every level basically boils down to "kill Wrog, upgrade the Freedom Strike, try not to die." The actual objectives vary slightly, but they don't drastically change the way levels play out. 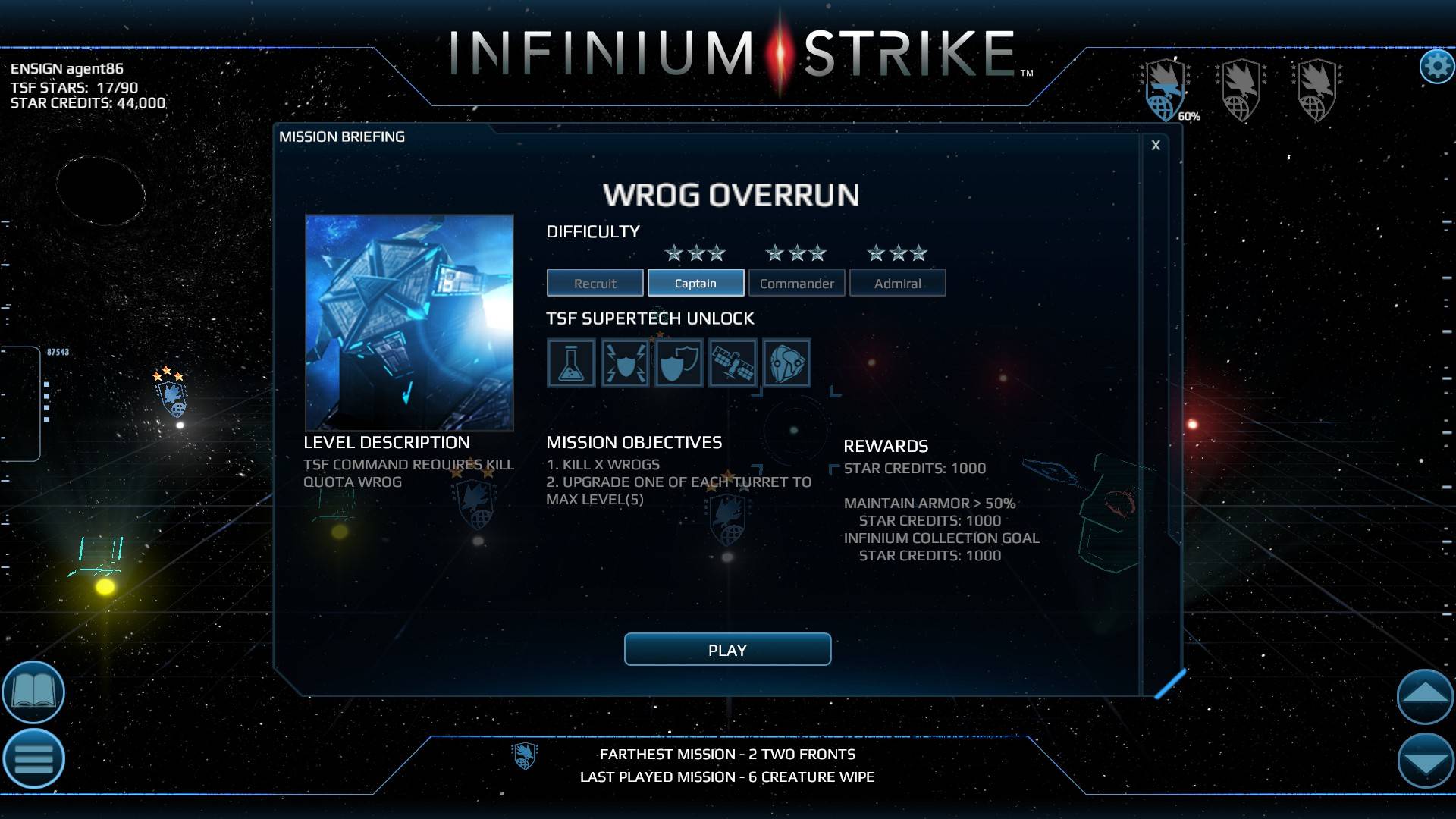 The other complaint I have is in the presentation. Don't get me wrong - Infinium Strike looks fine. It's just that there's a lot of emphasis placed on moving the camera around to see the fight from various angles. The most useful tactical view is right off the bows of the ship, and there are quick camera views for each of the four quadrants. However, a lot of keyboard and controller real estate is dedicated to moving the camera around. When enemies are attacking from all sides and seconds matter, stopping for a pretty view of the alien cruiser that is shoving missiles up your butt is not high on the priority list. It's a bit like playing a shooter and having an analog stick dedicated to moving the camera around to get a more cinematic angle on the action. 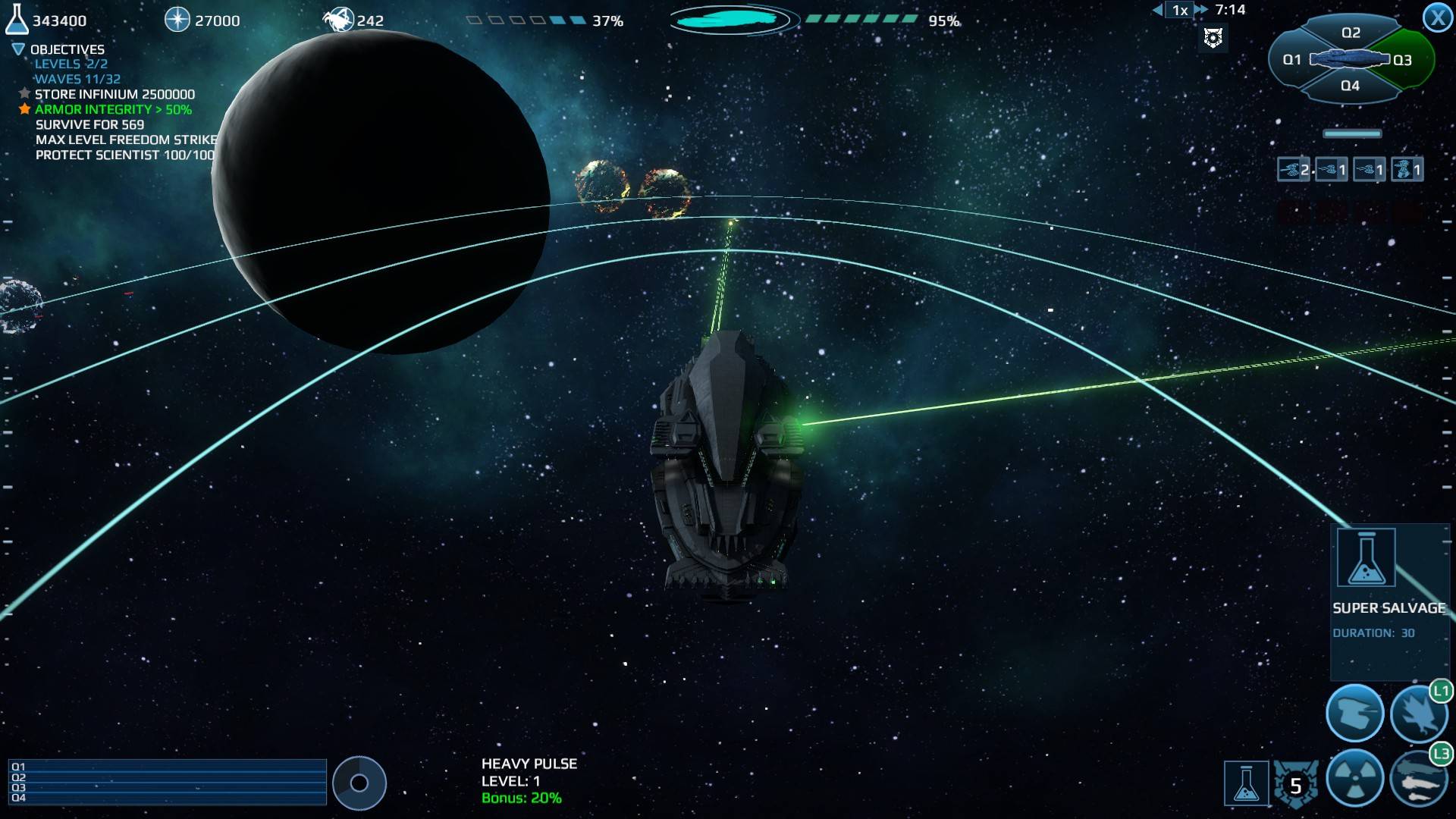 On top of that, often you're fighting mostly black enemies on a mostly black background. It can be tough to pick out enemy units at times, or to understand what enemies you're up against until it's a bit late to start reacting. Sometimes enemies or their missiles will move out of the default camera field of view. The variety of enemies also means you've got to try to learn each enemy's attack pattern, the type of weapon they fire, and the correct anti-alien weapon to deploy. I found myself building the same turrets on all sides of Freedom Strike, once I found a combo that was generally useful against most threats.