Zachtronics' latest game is Infinifactory, a 3D sandbox/construction/factory/puzzle/simulation. It landed on Steam Early Access last month, and Zach was nice enough to hook us up with a copy to check out. Since it's still in Early Access, let's take a look at how things are developing!

Infinifactory will be immediately familiar for anyone who has played SpaceChem before. It's too simplistic to call Infinifactory "3D SpaceChem" although I can understand why people might feel that way initially. Both games are puzzle games where you're trying to create a particular output given a particular input or set of inputs. SpaceChem is focused on chemistry and features simplistic reactors that have two tracks on which atoms and molecules can move through them. 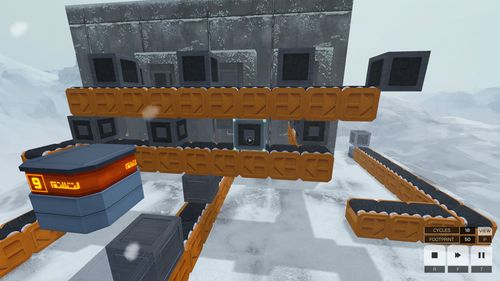 Infinifactory eschews this simplicity for a more free-form experience. Items flow into the level from one or more sources, and can be moved, changed, or assembled via a variety of useful blocks. Each level has an output area where a specific configuration and orientation of items is required.

The blocks you can use to combine the inputs and build these outputs are varied, and introduced slowly through tutorial levels. Conveyor belts and welders allow you to move blocks and stick them together. Pistons and detectors allow you to sort and subdivide streams of blocks. Later levels introduce blocks that rotate and destroy things. 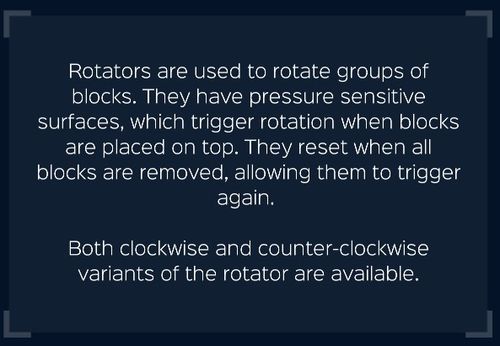 At the end of every level, your solution is scored based on how long your factory ran and the size of its footprint. These values can be compared against how other players performed.

The different types of blocks and the 3D editor remind me more of Minecraft's redstone than SpaceChem, honestly. Infinifactory's puzzle focus sets it apart from the more free-form sandbox approach of Minecraft, however. It's often not enough to just get blocks to line up in space, you've also got to make sure they line up properly in time.

Solving the puzzles is fun, and the open-ended sandbox style of factory design lends itself well to experimentation. What really impresses me with Infinifactory, though, is the level of polish. 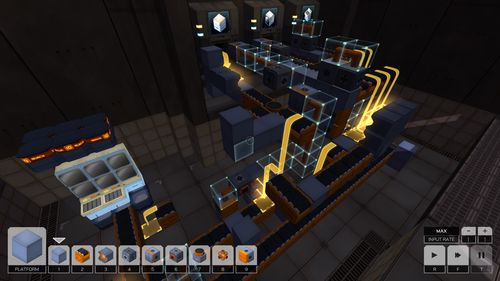 It's the little things that make a big difference - Infinifactory remembers the last level you were on and the state of your factory when you quit, and starts up right where you left off. Conveyor blocks show you where blocks will land when they fall off. The puzzle selection menu allows you to store up to three different solutions for each puzzle.

Steam Workshop support means that the community can create new puzzles, which means there's no limit to your playtime.

There's also a plot of sorts, involving alien abduction and being one of many humans forced to solve complex factory scenarios. I found it both silly and morbid, as the aliens insist on rewarding you with crazy trinkets, but the story is told primarily through recordings from failed workers, found on their skeletonized corpses.

There are a few rough edges here and there, although I'll admit my nitpicks are minor. Also, this game is still in Early Access, so likely some of these things will be fixed before you play it.

I feel like the game could use a bit better of a tutorial, or perhaps some demo scenarios where a variety of simple devices are shown off. The initial learning curve can be quite high, which might turn off less hardcore players. For instance, taking a stream of blocks and breaking it into several substreams is a common task, but doing it efficiently and evenly can be difficult to understand at first. 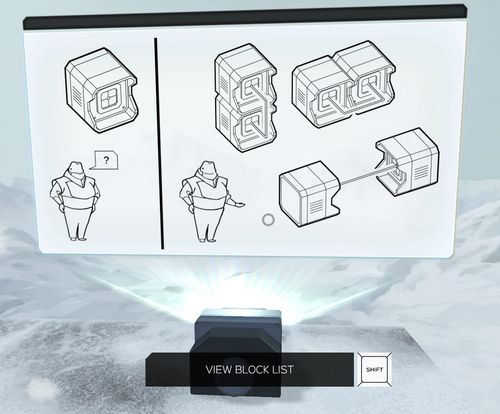 Also, the text descriptions for new blocks are only available after you've already played the level where they first appear. Sometimes the properties of new blocks aren't immediately apparent, and this lack of documentation makes these intro levels a bit more trial and error than they would be otherwise. There's often an "Ikea style" pictogram representation when a new block is introduced that covers the basics, though. However, there are actually properties of blocks I didn't know existed until I watched some replays from other players.

I'd like to see a few features, although I don't know how easy they'd be to implement. Sometimes I'd like to be able to select a whole group of blocks and move them as one. This would come in handy when I've built something complex and realize that it's just slightly off from where it needs to be. It would also be nice to be able to save a "checkpoint" in my factory and then revert to it later, kind of like using source control. That way, I could experiment with different ideas a bit faster.

Update: After I published this, Zach contacted me and gave me an update:

Moving groups of blocks is coming in the next update (ETA ~2 weeks) and that reverting to the last working configuration will probably be in a future update. The next update includes a new set of puzzles as well (the first of a few).

...so it sounds like by the time you play Infinifactory, you may already have some of my requested features :)

I don't normally give glowing recommendations to games in Early Access. I usually will tell people that they should beware of purchasing a game before its full release. In the case of Infinifactory, though, I'm going to make an exception.

Infinifactory is a better Early Access game than many full releases I've played this year. If you are a fan of sandbox puzzle games, if you enjoyed SpaceChem, or if you like playing with redstone in Minecraft, Infinifactory is an easy game to recommend. It's challenging, but not often frustrating. It will break your brain in new and interesting ways, and get you solving complex problems. You'll be driven to improve and want to see the clever things other people have built.

Even in Early Access, Infinifactory is already infinitely fun.