If you're going for the Challenge Accepted achievement/trophy, you're going to need to locate Jimmy Jenkins for the "JEEEENKINSSSSSS!!!" Badass Challenge.

Is Doctor's Orders patched or not?

Most achievement guides reference Doctor's Orders, a mission in the Wildlife Exploitation Preserve. Apparently, there is a very high chance of getting Loot Loaders out of certain crates while on this mission. This method also worked best if you had the Creature Slaughter Dome DLC, which is not part of the Season Pass - it was a preorder bonus or you can purchase it separately.

I had read that this was patched (edit: it was apparently only temporarily patched, much to my chagrin) and I didn't have the quest or the DLC, so I set about finding another good way to farm him.

Let's start from scratch, then, and I'll describe the area, route, and tricks I used to get my Jenkins kill. This took me about 2 or 3 hours total, but I will admit some of that time was spent messing around and investigating the best techniques for getting him to spawn. Hopefully my wasted time is your gain!

What is a Jimmy Jenkins?

Jimmy Jenkins is a Wee Loot Loader, and as such he pops out of Hyperion Ammo Crates randomly. These ammo crates are the kind that open up and have three shelves in them that spin outward. Loot Loaders cannot pop out of other types of Hyperion crates.

Where should you farm him?

There are several locations where there are heavy concentrations of Hyperion Ammo Crates. I considered Opportunity, but the crate-to-time ratio seemed too poor.

My favorite is Thousand Cuts, near the exit to the Bunker. From the Thousand Cuts fast travel station, head up to the Bunker exit, and use it. Then turn right around and go back to Thousand Cuts. Now your spawn point will be this entrance, even if you save and quit.

From here, you can farm a whole bunch of crates. 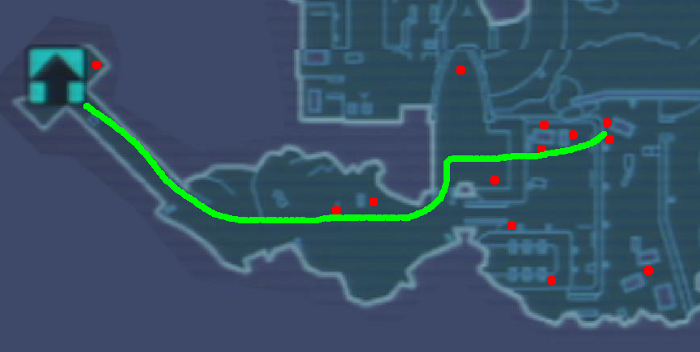 Red dots are the approximate location of the ammo crates. The green line is my path through the level.

My route takes me across the bridge, onto the loading dock, grabbing all the chests along the way. From here, you have to kill the Badass Constructor, and three or so engineers will spawn. Kill them, then open the chests on the loading dock.

Jump over the railing and down to the next level. Take out the engineers, surveyors, and loaders in this area, and any others that are firing at you from a distance. Clear out all the chests.

Then, jump down another level and open the four chests that are tucked up underneath the overhang.

Save, quit, and repeat until you find Jimmy or stab your own eyes out in frustration.

Any other tips or tricks?

In addition to the map and the route, here are a few notes:

Also, don't be a dumbass like I was - I found Jenkins finally near the exit to the Bunker. I was so elated I just stared at him, and he knocked me right off the frickin' mountain. I died and spawned down at the fast travel at the far end of the level. Luckily, he stayed very still while I ran back up there and I got my kill. If you see him, though, shoot first and ask questions later!