How I fixed my Prototype 2 Performance Issues

Prototype 2 was released a while back for consoles, and a few months later it came out for PC as well. Over the holidays, I picked up the Steam version and it's been taunting me from within my Steam library. I've finally finished building my new rig, so I thought I'd install it and check it out.

My rig should demolish this game - I just finished playing Crysis 3 on high settings at 60 frames per second, and this is a game designed for consoles that are several years old. However, it just barely plays the game, with frequent drops into single-digit frames per second. The game just chugs and chugs, and even moving around at times is painful. There's terrible lag, and the game was almost unplayable at times.

I searched around for solutions to this problem, and I think the root cause is that it's a pretty bad console port, and while it performs OK on nVidia cards, ATI cards have serious issues. Here's a summary of all the things people said fixed their problem, with the stuff that actually worked for me at the end.

The in-game settings menu is generally your first line of defense against terrible frame rates.

You can tone the graphics down in-game, and one would think this would have an effect on the frame rate. However, it didn't fix the terrible frame rate issues I was having, even on the lowest settings. 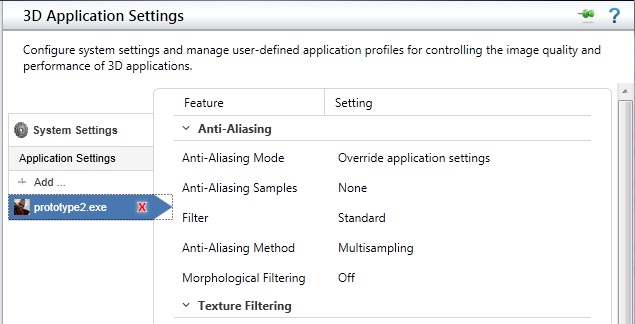 Catalyst Control Center can override in-game settings, and in some cases allow you to change things that the game won't let you.

Catalyst Control Center, the management app for ATI cards, can be configured to override in-game settings and force particular 3D optimizations or simplifications on particular games. You can create a custom Prototype 2 profile, and set the settings as low as they will go, but I didn't really find that this was useful either. 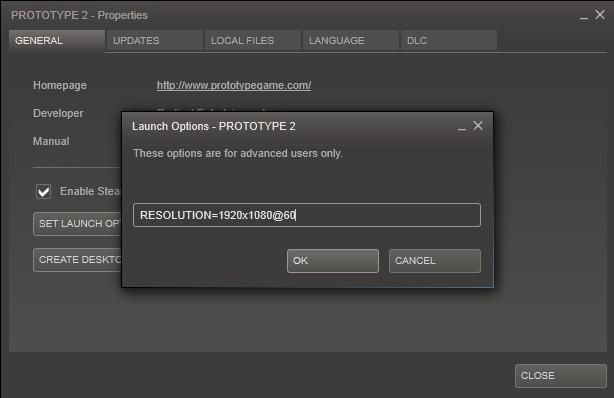 Right click the game in your library, choose "Properties" and then click the "Set Launch Options" button to bring up this dialog.

This didn't do anything for me, but hey, it's a quick and easy thing to try.

I have no idea why there are at least 6 devices here, I only have one mouse and one keyboard. Maybe Synergy is to blame?

HIDs, or Human Interface Devices, are things like mice and keyboards. Supposedly extra devices present (real or virtual) on some PCs cause slowdowns with this game. You can disable HIDs that you don't use in the Device Manager. This is one of the weirder suggestions, but apparently it worked for some people! I thought it might be a possible issue for me, since I use Synergy, which has a record of doing strange things to games. Just make sure you don't disable your actual mouse or keyboard, lest you find yourself unable to re-enable them. A safer bet might be unplugging any USB devices that you know are not in use.

Okay, so that's all of the suggestions that worked for other people but failed to solve my problem. Here are the two things that actually worked for me:

Many older games run into issues with multi-core systems. They just can't seem to handle the fact that threads may execute simultaneously. Luckily, Windows provides a method of forcing programs to run on only certain cores. The easy way to do this is through the Task Manager. 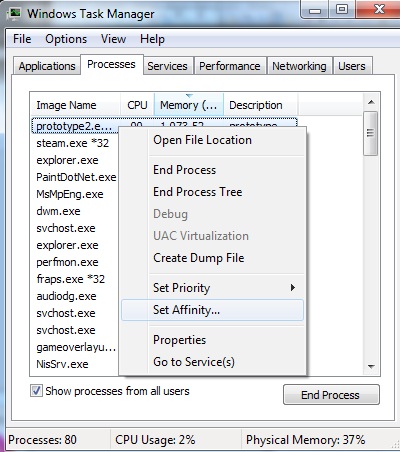 Task Manager will let you set processor affinity, but only if it is running as Administrator, and only for currently running programs. The settings do not persist once the program quits.

First, load Prototype 2. Then, open Task Manager, click the "Processes" tab, and if there is a button (not a checkbox) at the bottom of the window, click it to open Task Manager as an administrator. Next, right click on the "prototype2.exe" entry in the list, and choose Set Affinity. Uncheck all the boxes except for the one that corresponds to the first CPU core on your system.

Do note that you'll have to do this every time you start the program up again. There are ways around this if you use certain utilities - a Google search for "set processor affinity" will likely turn up some results. Personally, I'd rather not go through the hassle of running some third party utility, so I just manage the affinity through the Task Manager.

Resource Monitor is a great tool for monitoring your system's state. Here you can see Prototype 2 "behaving" and only consuming a mere 750MB of memory, although in major slowdowns it peaks at 3GB or even more!

A quick look at the Task Manager or Resource Monitor while in-game shows that this game eats RAM for breakfast. I have an 8GB system, but this thing easily consumes 3-4GB at times. I found I pretty much had to choose between Prototype 2 and Chrome on my system. I've also got little to no swap due to it being SSD-based, so if you've got a monster amount of RAM or a sizable swap file, you might be better off than I was.