How do I clear Candy Crush level 97?

Level 97 is punishing. Candy Crush Saga has a reputation for punishing, but this one is above and beyond. I spent a good week's worth of lives clearing this level. It is ridiculous. If you decide that you've had enough after throwing away dozens of lives on this level, I totally understand. However, for those hardcore crushers out there, I've put together as complete a strategy as I can.

Are you still with us? Then let's begin... 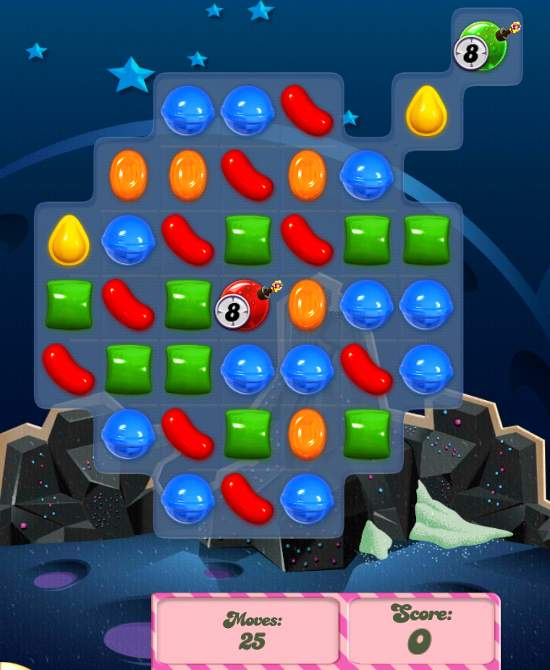 We Are Stress Bob-Omb!

Level 97 is shortly after the introduction of bomb candies as a gameplay mechanic. Don't confuse these with "color bombs" which you get from 5-in-a-row matches. Unlike color bombs, these bomb candies have a number attached to them. Every move you make decreases this number, until it reaches 0. If this happens, the level is over immediately, and you get no "sugar crush" - needless to say, this is very, very bad.

This level always starts with 2 bombs in the same positions. One is up in the upper right where you can't match it immediately. I suggest rolling this level (Need info on rolling? Click here!) until you have a 3-in-a-row match in one of the right two columns to start out with. If you don't match this bomb out of the upper right early, chances are you're going to fail this level before it even begins.

Beyond that, I would suggest focusing on the middle three columns. If you have just one or no bombs left on the board, a good move is to make a vertical match in one of these three columns. You'll probably get 2 or 3 new bombs, all lined up with lots of options to take them off the board.

Game Update! This level appears to have been made somewhat easier with an update to the Android and iOS versions of the game. A couple people mentioned this, so I tried the level again after updating, and I won on the first try! If you're truly stuck, consider updating your game through the iTunes App Store or Google Play.

Matching bombs can help, as they will give you 3,000 points when matched. Thus, matching bombs helps you avoid an early loss, and moves you somewhat closer to victory. However, if you multiply it out, even if you match a bomb on every move, you'll still be 25,000 points short! Bombs by themselves are simply not enough to win this level.

Pro Tip I've heard from a couple of people that matching a bomb with a color bomb (the 5-in-a-row candy) will instantly net you a very large amount of points. I didn't have this experience, personally. I tried this a few times and came up empty. I've heard it works from other people, though, so if you've gotten stuck here it might be worth a try.

What will get you over the 100,000 point total and let you move on from Candy Crush level 97? Luck. Lots of luck and tons of special candies. Unfortunately, the striped candy, our go-to move in times of need, is not that powerful here. If you can, match for wrapped candies (by making a T or L shape of 6 candies) and detonate them as close to the middle of the board as you can. Matching two of these wrapped candies together can also bring you some good points.

The sad truth of this is that you're going to need a metric ton of special candies to hit the point total before your moves run out. When I finally won, after losing at least 60 times, I had at least 10 wrapped candies, 5 color bombs, and more striped candies than I could count, and I still just barely won it with a single star.

I have to imagine that this score requirement is a glitch that snuck into the game and hasn't been fixed. It's frustratingly difficult, especially given how early in the episode this level occurs.

Best of luck to you, fellow crushers. If this level is your last stand, I understand and salute you. If you're interested in a new game, we've scouted the best alternatives to the ultra-popular Candy Crush Saga - perhaps this article or this one will be interesting to you.