Frostpunk is a steampunk-themed post-apocalyptic city builder from 11 bit studios, who you may know from the Anomaly: Warzone Earth series or This War of Mine. I got a chance to check out a demo of Frostpunk while on the expo floor at PAX South 2018, and thanks to the folks at Evolve I got a review code a few days before it launched. Frostpunk's style and gameplay caught my eye, so I'm super excited for the chance to do this review! Let's get started.

Frostpunk invisions an alternate history of the world, where sometime during the 1900's, a massive ice age begins, freezing most of the civilized world. Luckily, to prepare for the coming eternal winter, engineers had the foresight to build these giant coal-fired generators in the middle of nowhere. Each of Frostpunk's scenarios looks at a different group of people fleeing a desolated London in search of someplace both safe and warm. 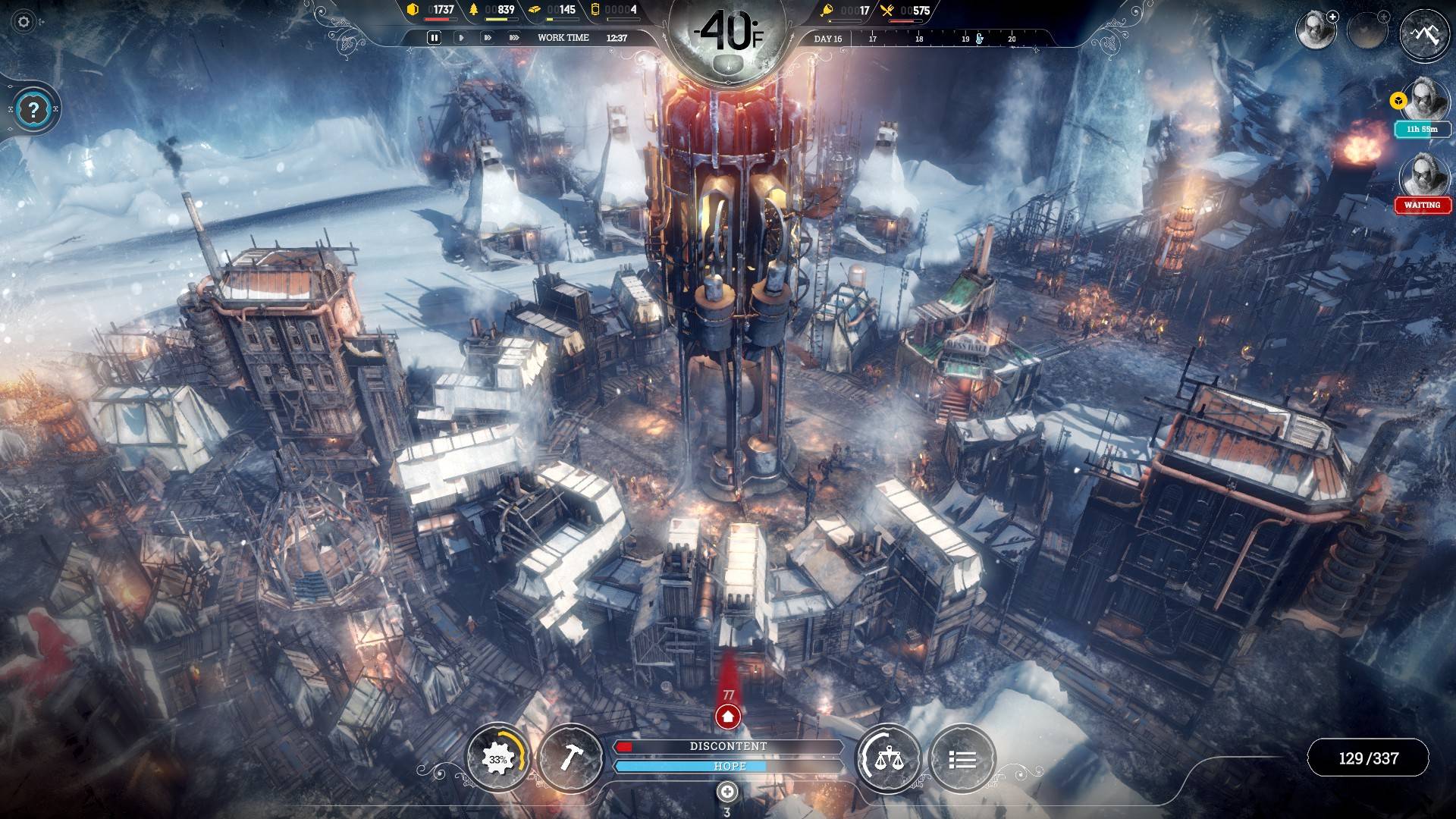 The center of your new city is always the generator - a lone source of warmth in the otherwise frigid, snow-covered world. It requires coal to continue running, and without it, your entire city is lost. Staying warm is only part of the problem, though, as you also need to feed your citizens and keep their spirits up. Hopeless citizens may give up on survival, while discontented citizens may rebel against your authority.

Frostpunk very quickly ramps up the difficulty, with each passing day getting colder than the previous. The scenarios throw increasingly complex curveballs at you as they progress, which also add to the challenge. The only way to survive is to plan carefully and build up a strong economy while investing in long-term projects like enhanced technology and scouting for resources. 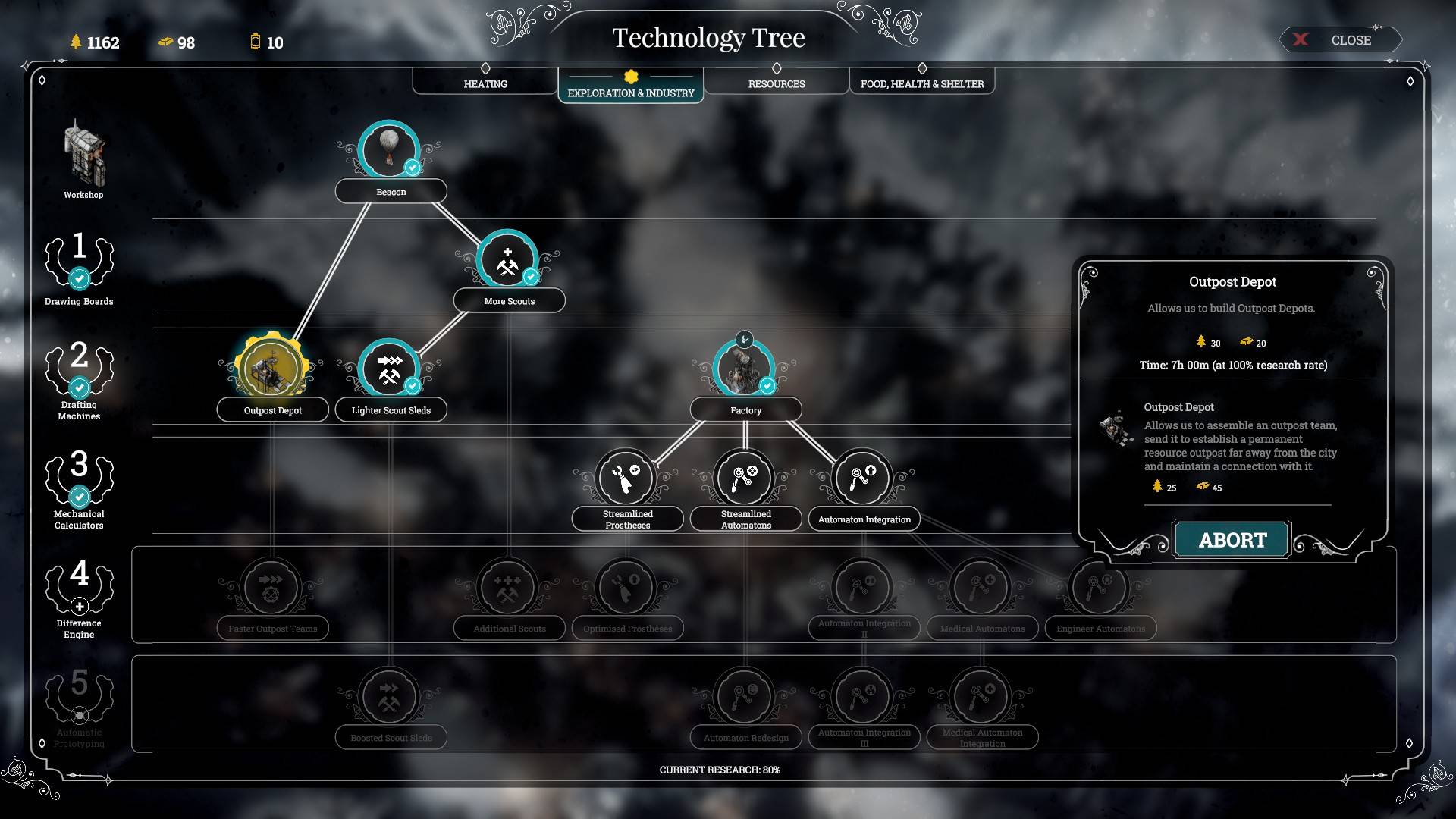 Periodically, you'll be asked to interact more directly with your citizens. Either the scenario will present you with some difficult choice to make, or you'll need to pass a new law that may be the right thing for survival, but maybe the wrong thing for civil society. 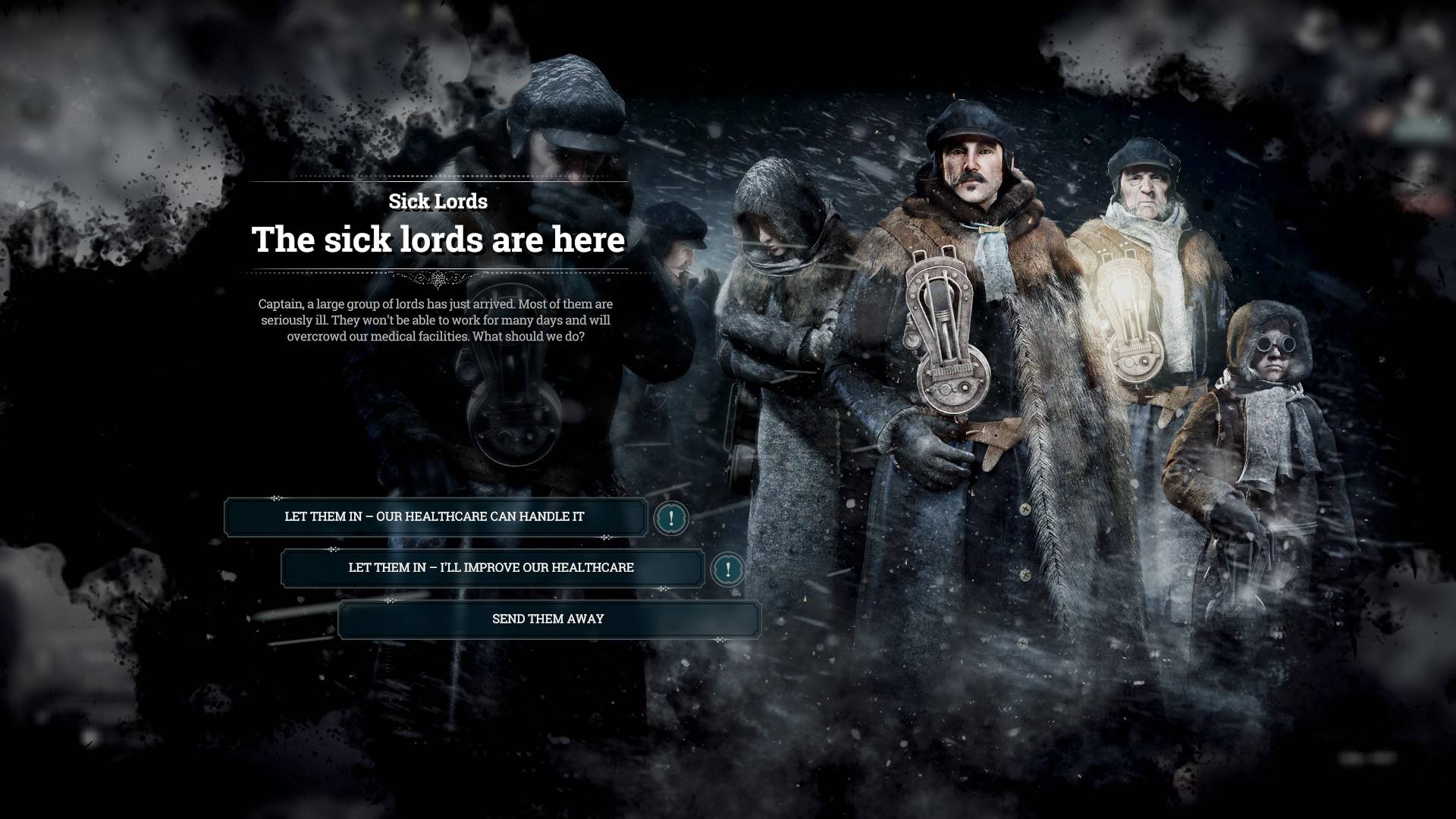 For instance, if someone is grievously injured, do you attempt to heal them by any means necessary, including amputation? Or do you try to keep them alive long enough that perhaps you can cure them completely? If you choose amputation, one of your citizens may refuse - do you force them to undergo the procedure, or do you let them choose death? Each of these choices has consequences and can impact the way the game plays out.

The presentation in Frostpunk is nearly flawless. Cold homes quickly build up snow on their rooves. Tiny people go about their daily routine, moving from their place of work to home and back when shifts change. Stories-tall automatons lumber about the city, working constantly to keep their masters alive. The music is understated but foreboding, reflecting the despair of the wintery environs.

Frostpunk suffers a bit in the replayability department, though. I managed to finish the "main" scenario on medium difficulty in two playthroughs that took a good 3-4 hours each. There's no score kept on how well you did - in my "successful" run of the first scenario, I just barely scraped by, with hundreds of my people dead, sick, or starving at the end. Still, this counted as a win. 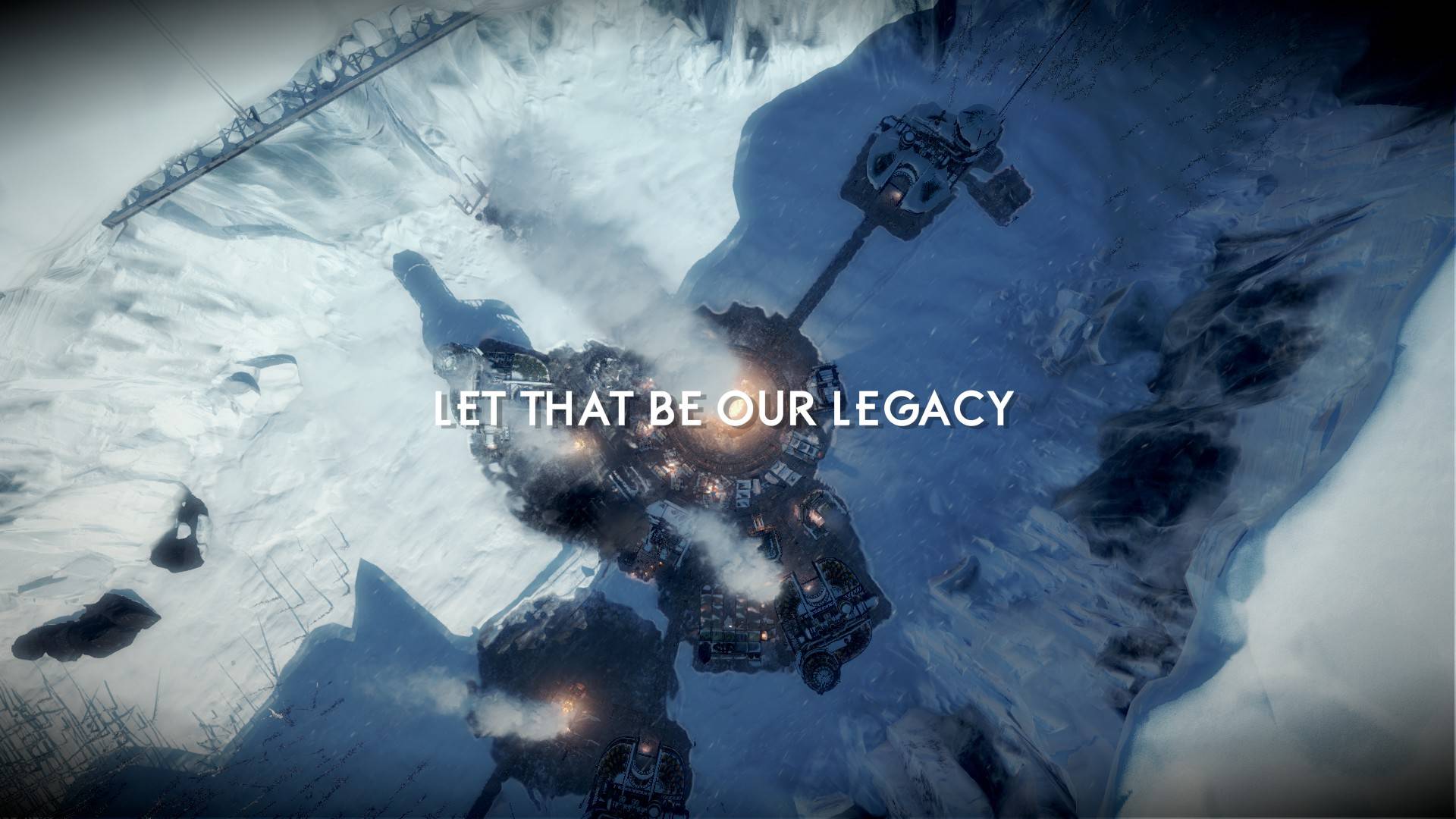 There's also no open-ended mode to Frostpunk. Once the scenario was done, the game ended for me. I wasn't able to continue to grow my city past that point. An endless free-play mode is a weird thing to leave out of a city builder. I was somewhat sad that I couldn't continue playing without the constant threat of story-related disasters.

On the subject of scenarios, there's only 3 included with the game as it stands today. I managed to finish all three in less than a week. However, it seems like the sort of thing that could be expanded on easily, or perhaps even opened up to the Steam Workshop to make the game essentially endlessly customizable. 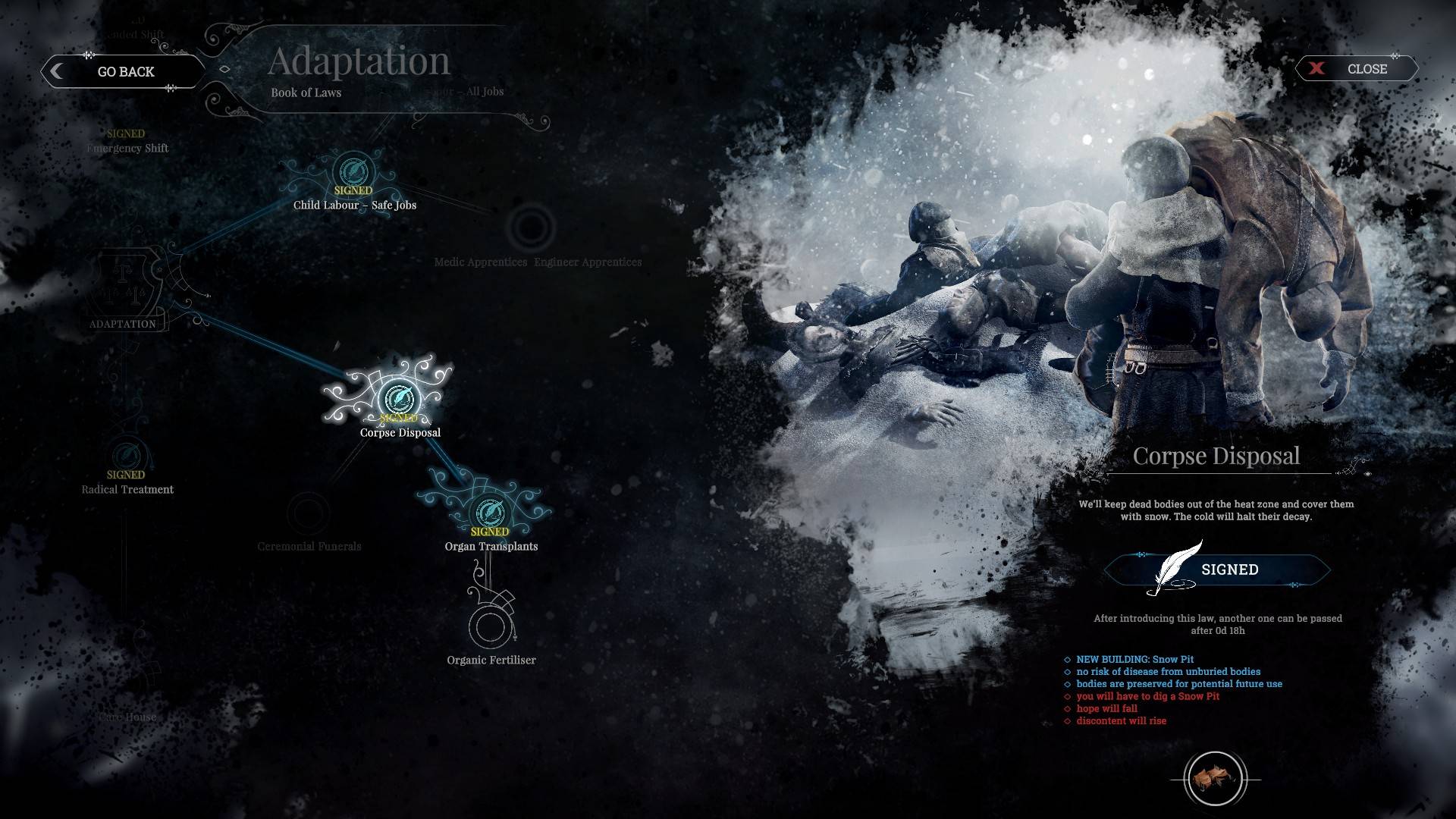 The difficulty of Frostpunk is a bit uneven at times. Some of that difficulty comes from UI issues - some important info (like the rate at which you're gaining/losing resources) is buried in areas you won't often look. Notifications for important events are sometimes subtle enough that you'll miss them.

Other issues arise from the fact that the sequence of events in the scenarios is canned, but not clear from the start. Several times I sunk myself by accomplishing goals too early, leaving me no time to stockpile before a major bad event occurred. Other times, I failed one sub-objective of a task and got an instant game over, which I wasn't expecting.