Five CoC Clan Wars Secrets that may surprise you

Clash of Clans: Clan Wars have been a very welcome injection of new content to SuperCell's mobile strategy juggernaut, but as with other aspects of CoC (and mobile games in general), you are often left to figure out the finer details on your own. In a game of strategy, information is power, so arm yourself with these clan wars secrets and get a leg up on those other Chiefs.

Related Video Prefer to watch rather than read? We've got you covered!

1. Picking who you want to participate

Clans range in size, and Clan Wars is designed to accommodate that. You've probably noticed that Clans are matched in 5 member increments up to the maximum of 50 vs. 50, and down to the minimum of 10 vs. 10. What is much less obvious, is who participates and how they are listed.

Update While this section was true when the article was first written, Supercell has updated the way clan wars participants are chosen since we wrote it. Now you can explicitly opt in or out to wars. In case there are too many members opted in to join a war, the most powerful clan members are chosen rather than whoever has the most trophies.

Clan members are ranked by Trophies, and then selected up to a number between 10 and 50 that's divisible by 5. Town Hall level, and upgrade status have no effect on whether clan members participate in a Clan War.

Warning If some of your senior members like to really "slum it" in the low trophy ranges when farming, be sure they climb up to the "per 5" breakpoint before starting a Clan Wars search, or they will be excluded from the Clan War.

Pro Tip Have a member you don't want to participate in a Clan War? If you have extra members past the "per 5" clan match up threshold, you can have them drop Trophies till they are at the bottom of your list. So for example if you have 12 members, make sure they drop till they are 11 or 12. This will keep them out of the Clan War, and will give another clan member the opportunity to participate so that hopefully attacks don't go unused. 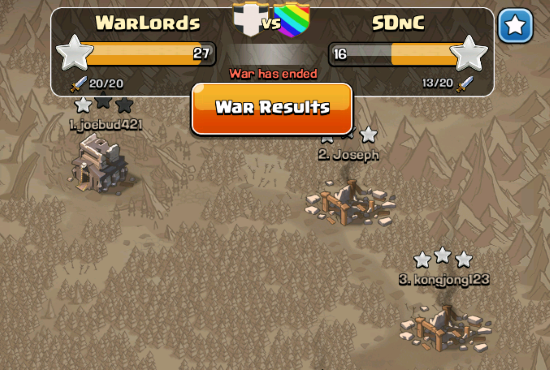 Somewhat counter-intuitively, the Clan War Map lists each participating clan member based on their upgrades. Often this will result in a sorting by Town Hall level, but it is possible for highly upgraded clan members (for their level) to be listed higher than a fellow clan member with a higher Town Hall level. This doesn't have much strategic effect, but there are minor effects.

Pro Tip The War Map is a great way to assess the upgrades-based pecking order of your clan. You may be surprised to see some clan members ranking much higher than you'd expect, and some much lower. If you are recruiting, or assessing new recruits, keep an eye out for those that rank highly among peers at the same Town Hall level.

Warning Upgrading your Town Hall too soon has lots of downsides, and now there is another one. Players who rush to upgrade will find that they may rank lower on the War Map than highly upgraded clanmates with a lower level Town Hall. This will make the higher Town Hall clannie a lightning rod for attacks in every Clan War because a) Opposing clan members generally get more loot for attacking a higher Town Hall target b) The "lightning rod" will look like the easiest target for that Town Hall level, and in general a weak target. I know it's hard, but don't rush Town Hall upgrades Chief.

By now if you've done a few Clan Wars you've probably figured out that you only need 1 star to be eligible for a War Win Bonus, and I'm sure you've guessed that not all targets are created equal so it pays to shop around. There are some nuances of choosing a target that are not obvious, however.

You might think that Clan Wars were about rallying your Clan to fight other Clans and win lots of loot. This is true, but to a much lesser extent than you might initially think. In each attack, you earn loot during the attack as an individual. If you earn stars in an attack, you also become eligible for a War Win loot bonus as an individual. The only effect other clanmates have on your loot is if your Clan wins or loses overall, and this in turn only affects the modifier for your War Win loot bonus. If you don't earn any stars, you don't get any bonus period. If you win stars, you will get a bonus even if your team loses, and more importantly even if other clanmates attack the same target and score more stars. In the end, the loot bonus is much higher if you win as a team... but don't forget to look out for number one.

You get exactly one shot at any given target. This means the first clan member to attempt a target always has a little bit more of a challenge, since trap locations and CC troops will be unknown, and they won't get a second try. Even if you are attacking a target another clan mate has already hit, it pays to be fully prepared. Watch all replays, memorize the locations of traps, and for heaven's sake bring a full Clan Castle and max Spells to the fight.

Pro Tip Due to the "No Double Jeopardy" rule, it pays to have your heavy hitters attack later in the Clan War. This will give them an opportunity to watch replays and see trap locations and Clan Castle troop compositions, which may increase their chances of getting the higher Star counts you'll need to win the Clan War.

3. War Base and Donates

If you've read agent's Tips for Clan Wars you should already know that your War Base is different than your regular base in several key ways. For some reason I still see A LOT of Clans or Clan Members that enter Clan Wars without seeming to understand this basic difference, so I think it bears elaborating.

Traps, XBows, Inferno Towers, and Heroes are all immediately replenished after each Clan Wars attack by an opposing Clan Member, without any need to pay for them. In fact, even the resources that get stolen from your Collectors and Storages don't come out of your actual personal reserves. This should radically change your base design, to try and pull every possible trick on your opponents to limit Stars. Even leave some of your traps unarmed in your "real" base, be sure to place them appropriately in your War Base. Be sure you have purchased all the traps for your Town Hall level, and at least get the cheap upgrades, as they can really make a difference when attempting to stop a 3 star.

Pro Tip Due to the new Hero AI, remember that your Hero will now patrol a more narrow area and can not be "kited" very far. Factor this into your Clan War Base design to protect your Town Hall, your Clan Castle, or critical defensive buildings. When your Hero engages enemy troops, they will tend to draw aggro, even if those units can't path to the Hero, and this is a great way to get them chewed up by defenses.

Unless you are in a pretty elite Clan, your clanmates are not going to be able to shell out Dragons every time you make a request. For Clan Wars though, it is really beneficial to spend a little extra for the more premium troops, since they are used over and over. It is also worth noting that Clan War CC troops can only be donated via the War Map and only on Preparation Day. Either due to lack of coordination, ignorance, or poor teamwork, we fight a lot of other Clans who have zero troops in their War Base Clan Castles. This is a significant strategic disadvantage because not only does the attacker not have to encounter and eliminate the infinitely replenishing CC troops, they don't even have to spend one second during the battle thinking about how to deal with them. This can easily make the difference between 2 and 3 stars on a close battle.