While we were checking out all of the great games at PAX South 2016, we stopped by the Finji booth and got a look at a dark little platformer that always had a line of PAXers waiting to check it out. Feist immediately attracted me with its dark, primal Limbo-ish look, but it turned out there was more than met the eye.

A different kind of darkness

It turns out, the comparisons to Limbo are actually pretty superficial. At face value the art style is similar, but the gameplay and plot feel very different. The central protagonist Feist fuzzball is a survivor - taking licks and giving plenty too. The Limbo kid always felt like a wimp that would crumple under the first blow he was delt, and that made the game feel like one big tightrope walk. The Feist "fuzzball" is the Little Mac of this forest - dishing out pine cones and pointy sticks to any creepy predator that gets in his way, and rope-a-doping the bigger baddies until he can either wear them down or out-smart them. I was crushed by exactly zero spider legs (although rolling boulders and spikey pits are to be avoided). 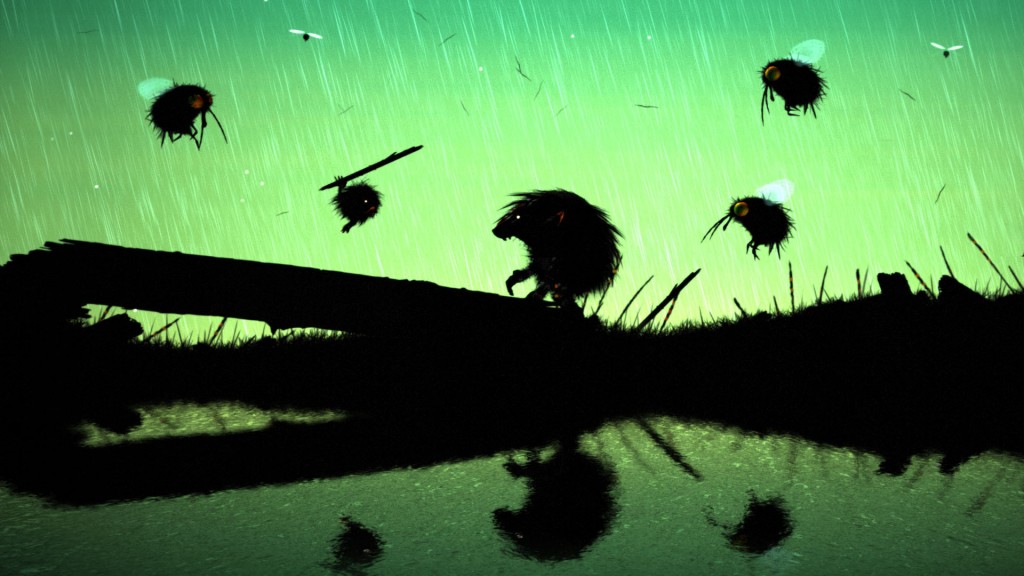 Just enough survivability to @%^! your pants

As I got started in Feist I took a pretty good beating. If the game is similar to Limbo in any way, its that it explains almost nothing to you. Here is how you move, here is how you pick up and throw... good luck. What dawned on me after a while was that "Fuzzball" could take a few hits, and could even heal with the right diet. You'd think this would make the game slightly less stressful, but in fact its a non-stop puckerfest. Almost every enemy encounter has a random element of movement and AI aggression patterns that can either lead you to a lucky break, or much more often a brutal beat down. These intense moments often felt Jackie Chan-esque as I grabbed every stick, brick, and pine cone in the area to hurl at my enemies culminating in a hilarious fail or a "from-the-jaws-of-defeat" victory.

In the longer shadows

The overall Feist experience was really great for me, but I am in fairness a recovering "platform addict" who drools over Light Fall and just recently finished punishing myself with Ori and the Blind Forest. If you don't have some platforming chops, you can expect to die - a LOT. It's also worth mentioning that the game isn't overly long. I clocked in just under 4 hours on my first play through, but there are more achievements I may go back and get, including "speed run" times to beat for each level. In your first run through you'll develop a pretty significant hatred for each of the enemy types, so getting a few extra cracks at them feels pretty satisfying on follow up runs.