Don't Call It A Comeback

Zynga has somewhat of a checkered past in the social games space. While they weren't the first to market, Farmville captured the Facebook crowd in a way that few games have since. However, they've attracted a healthy amount of criticism for their emphasis on spamming your social media friends in order to get ahead in the game. It's a marketing tactic for the game, pure and simple.

Farmville 2 is only marginally better on this front, and many games since have come along that were a bit easier to play without constant begging. Candy Crush Saga has been the big hit of recent years, and Zynga has since ceded the crown of social gaming to its maker, King.

Farmville 2: Country escape could easily have been a cheap tie-in or port of Farmville 2 to mobile, but it's not. There's a tiny breath of originality here that I haven't seen from Zynga in the past. Most of their post-Farmville games have been cheap reskins of popular titles. Country Escape doesn't fully break the mold, but it is a good sign that Zynga has learned that it needs to get creative if it wants to get back on top.

Fun, But With Caveats 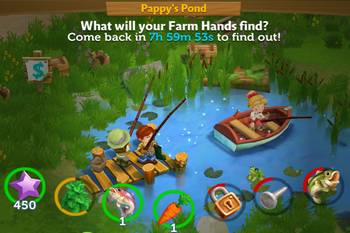 Sadly, the innovation is pretty skin deep. This is a pretty standard "tap and wait" game. Tap the well to get water. Tap the field and swipe a water drop onto it. Wait a few minutes for the crop to grow. Tap to harvest. Tap and swipe the crop onto an animal to feed it. And so on into infinity.

That said, the basic game is actually kind of fun. There's a certain rhythm to all this growing, feeding, and selling that makes the early levels fly by in a breeze. The game frequently opens up new mechanics that change the game and add some variety, although it never gets particularly complex, deep, or innovative. I find myself playing for hours without realizing where the time went.

The game is bright and colorful, and has a hopeful and cheery tone that pervades the entire game. It manages to give off "fun" and "relaxing" vibes without being overbearing about it.

Gaining Some Friends and Paying the Piper

There are a number of social elements to the game. Not only can you share things with your Facebook friends, but you can also form Co-Ops with other random internet strangers. Above and beyond your friends, you can also trade with other people globally through a market interface. These social connections add some much-needed purpose to crafting some of the complex things that unlock as the game progresses. 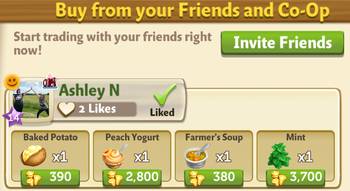 Obviously, as this game is free, there's in-game microtransactions. In this game, keys are the premium currency. They let you skip wait times, but since this is a game about waiting I find that kind of pointless. They also unlock multiple copies of buildings, which I find essential for some of the tougher timed quests in the game.

The game's not obnoxious about selling you things. It's certainly possible to play indefinitely without paying. However, I would like to see a few more free keys now and again. They're essential for expanding your farm's production, especially of lower level goods. Keys are very hard to come by, though.

To Farm or Not to Farm?

So where do I stand on Farmville 2: Country Escape? It's hard to say no to it. It's free, it's relaxed, it's simple and mindless but manages to avoid rote repetition for the most part. If you have nothing but hate for Zynga, this game is unlikely to change your mind. However, if you're looking for a relaxed game experience, you might as well give this a try. It is free, after all.

Candy Crush and its relatives should have demonstrated to the world that even social, Facebook oriented game players can play games that have a bit of meat on their bones. I think Country Escape could benefit from some minigames, or even just some random chance in the farming elements that would bring some much needed depth to the game. Tapping and waiting gets kind of old after a while.