Blood Dragon was released recently as a standalone DLC/expansion for last year's Far Cry 3. It's a hilariously awesome romp that reminds me of the better moments of Saint's Row 3 and the Torgue DLC for Borderlands 2. I had such a blast with it that it seemed natural to go after all the achievements! Luckily, they're more fun than frustrating the time around. Let's dive in and cover all the tricky bits so your achievement hunting doesn't get in the way of your neon-laser-electronica-80's nostalgia.

The main quest achievements are all pretty straightforward. There are three "secret" achievements related to the campaign. However, there is no achievement for Hard difficulty. No doubt hard difficulty is going to make some of these other achievements very, very difficult, but if you're up for the challenge, go for it!

I will suggest that you wrap all the side missions and get all the collectibles before you tackle the campaign missions. The side activities collectively unlock a lot of the weapon attachments. They also bring in tons of experience, allowing you to level up and become the ultimate Blood Dragon slaying badass.

Once you've leveled up some, there are some tricks to learn:

... and weapon upgrades to prioritize:

The rest of the weapons I could take or leave. Despite the emphasis on stealth in sections, the pistol is still somewhat useless even with the silencer. The bow is a solid choice against animals and weak enemies, but doesn't really scratch the heavier baddies. The shotgun never really becomes that powerful, despite many an upgrade.

In order to get most of the side missions, you're going to need to start by capturing garrisons. This will help you work towards Way to Go, Garri-Son. Once you've completed the first set of story missions and have the freedom to move around the world as you see fit, you can capture all of the garrisons. 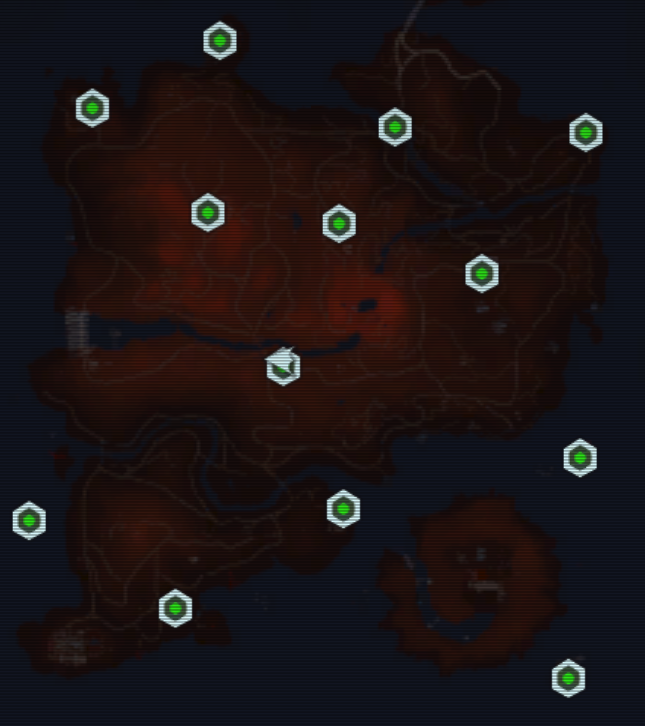 There is one that looks like it is part of a large island in the southeast of the map. However, it's around the backside of the island, and doesn't require that you breach the island's defenses. The island itself is part of a story mission and unrelated.

There are many strategic options when securing a garrison. However, the one that I find works the best is:

Lather, rinse, repeat to take down other garrisons. There are a few where you can't employ this strategy because there aren't mega shields. Typically these are off the coast of the main island, where the blood dragons don't roam. In this case, I tended to put these garrisons off until I was powerful enough to just go in Rambo-style and chop everyone down with my overpowered weaponry.

Once you've captured a garrison, you will gain access to the side missions there. The hostage and predator side missions count towards Nice Like Jesus and Kill Them All, respectively.

Hostage missions send you to a particular area (usually a small bunker or ruins) where a scientist is being held by several cyber soldiers. They advise you to use stealth, but as long as you're close to the scientist and actively engaging the enemies, they are unlikely to take him out before you can take them out. I tended to snipe from a distance with some trees or bushes for cover, and then either charge in guns blazing, or do a bit of stealth.

Just be careful if you have the explosive sniper rifle upgrade that you don't fire too close to the hostage...

Predator missions challenge you to use a particular weapon to take down a unique target. Usually there are several targets in a given area, and there's no restriction on how you take these other guys down. The unique target is usually glowing green and should stand out from the rest of the rabble.

Again, I tended to use the sniper rifle to thin the herd a bit, and then use whatever weapon they indicated to take down the target.

There are three sets of collectibles to hunt for. Before you go hunting, though, it's advisable to liberate the garrisons and buy the upgrades which allow you to see the collectibles on your map. You can also set waypoints which will not only point you to the correct area, but also give you the precise location of the item, including its elevation.

What are You Reading For? tracks Dr. Carlyle's notes. These are almost always found in caves. Your waypoint won't show the cave entrances, so this can be somewhat tricky. However, the minimap does show the cave entrances, although it can be hard to see. Each note is part of the story of Dr. Carlyle, one of the chief scientists assisting Omega Force. 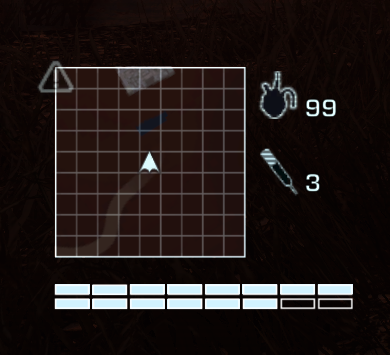 The easily missable blue mark just above my current location on the mini-map is a cave entrance.

The Greatest Format of all Time tracks VHS tapes. Each one has a different silly movie title, and they come complete with plot synopses you can view in the collectibles menu. These are typically found in Omega Force bunkers and outposts, on top of boxes.

Finally, The Drug of the Nation tracks TV sets. These are typically found in ruins, and sometimes even underwater. They're the easiest of the three, in my opinion, since they're usually out in the open and unguarded.

You could consider killing all animal types for Murder Nature a "collectible" of a sort. The animals are all shown on the world map, with the exception of the turtle, the snake, the dog, and the alligator. 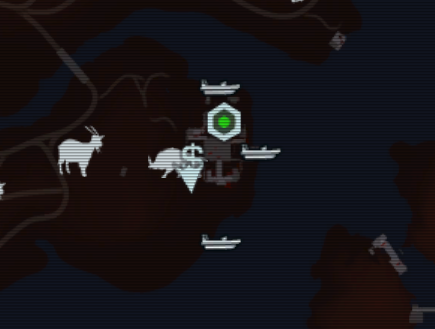 Towards the center of the southern end of the island is this garrison, with a quest that will yield a turtle and an alligator kill.

There's one "Predator" mission that will take you into a sewer system where you can fight both turtles and an alligator. The snakes can be found in ruins, and typically they'll jump up and bite you and cause a quick time event to occur. Finally, dogs can be found in some of the story missions as you raid Omega Force bases.

Blood Dragon Down and Dragon Slayer are both awarded for just killing blood dragons. There are plenty of these around, although you may want to level up a bit before you take them down. Having some powerful, upgraded weapons helps too.

If you follow my garrison strategy, likely you'll lure quite a few of these into garrisons where mounted guns are available. If you've already liberated a garrison, they can't make it through the shields, although you can still shoot at them from the inside.

If I'm fighting them outside a garrison, I like to have some ruins or other cover to kite them around. Their laser attack is damaging, but they telegraph this move and it is easy to dodge behind cover to avoid it. However, they are downright deadly in close quarters.

For Set Them Free, you'll need to target blood dragon braincages. Only some of the blood dragons in the game have braincages - you'll find these dragons near Omega Force garrisons and during story missions. I haven't seen many roaming the wilderness, but they do pop up from time to time.

Running man will probably unlock organically - as you're running around the island, if you anger a blood dragon, just throw a heart to distract it and then crouch.

The tricky one of this bunch is Just the Tip which requires that you kill a blood dragon with the bow and arrow. The bow and arrow does very little damage to a blood dragon, sadly. I suggest getting their health bar down to completely empty, so that they are on their last legs.

Even still, it can take all 20 of your arrows to kill them. They have a weak spot which is on their chest, but they usually don't expose this unless they're rearing up to fire their laser eyes. With careful timing, plenty of healing, and some luck, you'll eventually score this achievement. 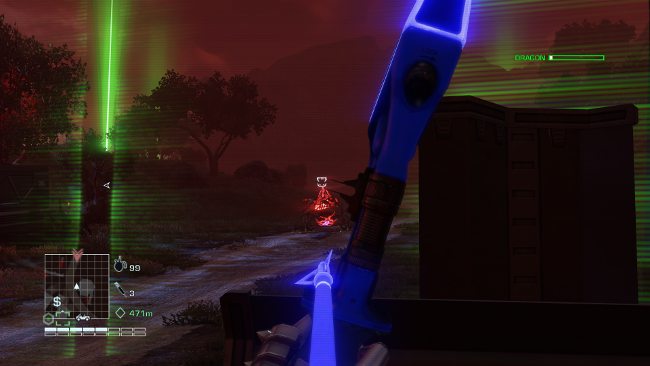 I've suckered this dragon into fighting me while I'm protected by the garrison shields. To my right is a bit of cover that easily blocks his laser attack. Despite his health indicating he's near death, plan to fire more than a few arrows to take him down!

You can try luring one near a garrison and letting it eat all the friendly scientists before you start fighting it - the advantage here is that you can stock up on arrows if you run out. However, there is the drawback that there's a higher chance some scientist or cyber soldier will kill it when you're just one arrow away from success.

The Only True Stopper requires that you headshot each different type of enemy. If you have the sniper rifle, this is pretty easy to do at long range. This also counts the "running dead" enemy type - both the "sword" kind and the "shotgun" kind, so make sure you get some headshots when you're up against them in the story missions where they appear.

Tooled Up doesn't seem tricky on its face, but I made it through the entire game and lacked enough cash in normal play to be able to afford all the upgrades. Opening Omega Force chests is a good way to get more, so keep your eyes peeled. These chests show up on the minimap and glow a bit when you're looking in their direction.

For reference, you earn around:

Thus, if you're in need, a good strategy would be to fast travel around to garrisons, checking for chests, and taking down any nearby blood dragons. Make sure you don't use up any expensive ammo, though! If you can get quick takedown kills (which, at a high enough level, will auto-loot the corpse), chaining a few takedowns together against normal enemies can be at least slightly profitable, but it's not going to be your primary source of income.

You can get Derp organically in the open world sections of the map, but there are also a couple of huge falls in the campaign missions, so this is likely unmissable if you're playing the game normally.

Similarly, Hail to the King will probably unlock during the normal course of the game if you're going for blood dragon kills, liberating all garrisons and finding all collectibles. All provide massive experience boosts.