Welcome to part 2 of my Factorio preview! If you missed part 1 somehow, click here to go back. 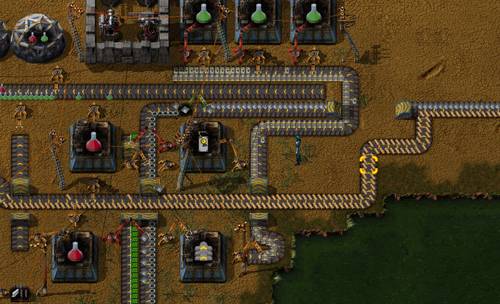 One of the things that will quickly sink one of these type of simulation games is poor AI. A lot of these games (ie, Dwarf Fortress) take all control out of your hands, and leave you with a number of AI "goons" to do the work for you. You can only interact indirectly with the environment, by submitting tasks that will be taken care of at some time when the proper "goon" is available.

At the same time, having to interact directly with the game to do menial tasks is similarly boring for me. This drove me crazy in Don't Starve, where I had to carefully gather twigs and wood for hours on end every time I died and restarted.

In Factorio, there's not a lot of control over the individual machines. For instance, assemblers run at a constant rate, and inserters will always fill their inputs to a particular threshold. However, you do have an impressive amount of control over the system as a whole.

Conveyor belts have two distinct tracks, allowing you to send a stream of two different materials to the same location, even if they arrive or are consumed at different rates. They can also be split, so that you can take one source of a particular good and divide it between two production chains. Inserters can also put things into or take things out of storage, allowing for buffers between different production areas.

Another important point to make is that you can directly effect the environment. Unlike games that only give you indirect control, if you need to put goods into a machine yourself, or hand craft a missing part, you can. This helps the game avoid chicken-and-egg dead ends that plague many similar games.

As I mentioned early on, Factorio takes place on a hostile planet. Thus, you are frequently tasked with keeping your factory safe as well as efficient. Aliens attack periodically, and if left unchecked they can destroy your stuff or flat-out kill you. 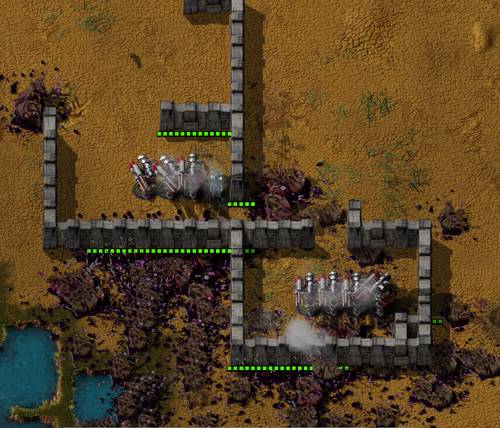 You can build armor and hand-held weapons, for personal defense if needed. However, just like most of the rest of the game, your defenses can also be automated. You can build walls and sentry guns, and even set an assembler to produce bullets and load them into weapons automatically.

Combat tends to be one of those things that makes or breaks a simulation game to me. Many try to be "roguelike" and focus on efficient, exacting preparation for combat. If you don't set up your base just so, chances are you're going to get wiped out quickly. Alternatively, a game can go too easy on the combat, and make the whole thing pointless.

So far, I've not been that bothered by the occasional alien invasion. It's something to worry about, and keep track of, but not something I need to be hyper-efficient and vigilant in order to avoid a quick demise.

Despite being billed as an alpha, I did not find that many issues during my time with Factorio. I've encountered the odd bug or two, but none that interrupted a game in progress in any significant way.

Despite the good tutorial, the game has so many different, deep systems that they're not all fully explained yet. I had to look up some of the stuff relating to railroads, and it still took me a half dozen tries to get my rail network up and going the first time.

In talking with the developers, though, they've said their goal is to have a complete tutorial. However, it's a lot of work that still needs to be done in order to convey these complex mechanics in an accessible manner.

There are a lot of tips and hints the game doesn't give you right away, and there's not an option in the help menu to pull up a list of them. There are a few key combinations that make life considerably easier (ie, moving all or half of a stack of things into the appropriate slot in a machine) that I found myself experimenting with as the game went on.

Travel from place to place is a bit tricky, as well. Your factory may sprawl across a large area and be under attack from several sides rapidly. You can build cars, and that speeds up travel, but you have to be very careful lest you crash them into walls or trees and cause damage or wreck them outright. They're also somewhat hard to keep going in a straight line.

I always tell people not to buy alphas unless they're okay with the current version being the last release. There's a free demo available that contains the tutorial, and I suggest downloading it and checking it out if you're on the fence.

If you like to build complex, detailed creations and watch them run and produce all sorts of interesting results, Factorio's an easy recommendation. Factorio scratches some deep OCD itch in the recesses of my brain that keeps me coming back for more. It's a LEGO Technic set of interlocking pieces and infinite possibilities.

Factorio is an impressive deepening and refinement of some core simulation mechanics that are too often left by the wayside in other, similar, games. If you like games such as the Anno series, the Tycoon series (especially Transport Tycoon), Dwarf Fortress, Gnomoria, SpaceChem, X3's automated trading and space stations, or any other similar process sim/god game, you'll find a lot to love here. You've got nothing to lose by trying the free demo.

...just don't be surprised if once you pick it up, you can't bring yourself to put it back down.

That's it for my preview, but I also chatted with the Factorio devs for a little while, if you'd like to learn more about the alpha or the challenges with developing such a complex game, click here to jump in!