Enter the Gungeon Review: Gunning for the Past

Enter the Gungeon may be the most hotly anticipated game in WOTS headquarters since... ever. We've seen Gungeon at four cons, played co-op, met Dave Crooks, seen the giant bullet costume that Sony made, and discussed it internally ad nauseum. It's finally here, guys! Enter the Gungeon is ready for prime time! Let's not waste more words introducing it, it's time to kick off the Enter the Gungeon review!

Related Video We streamed Enter the Gungeon the week before it launched! Check it out:

The concept is pretty straightforward, yet ludicrous - you've come to the titular Gungeon, a vast underground fortress, in search of "a gun that can kill the past." Each of the playable characters has some sordid history they're trying to erase, and they seek to find this gun to permanently wipe their mistakes. 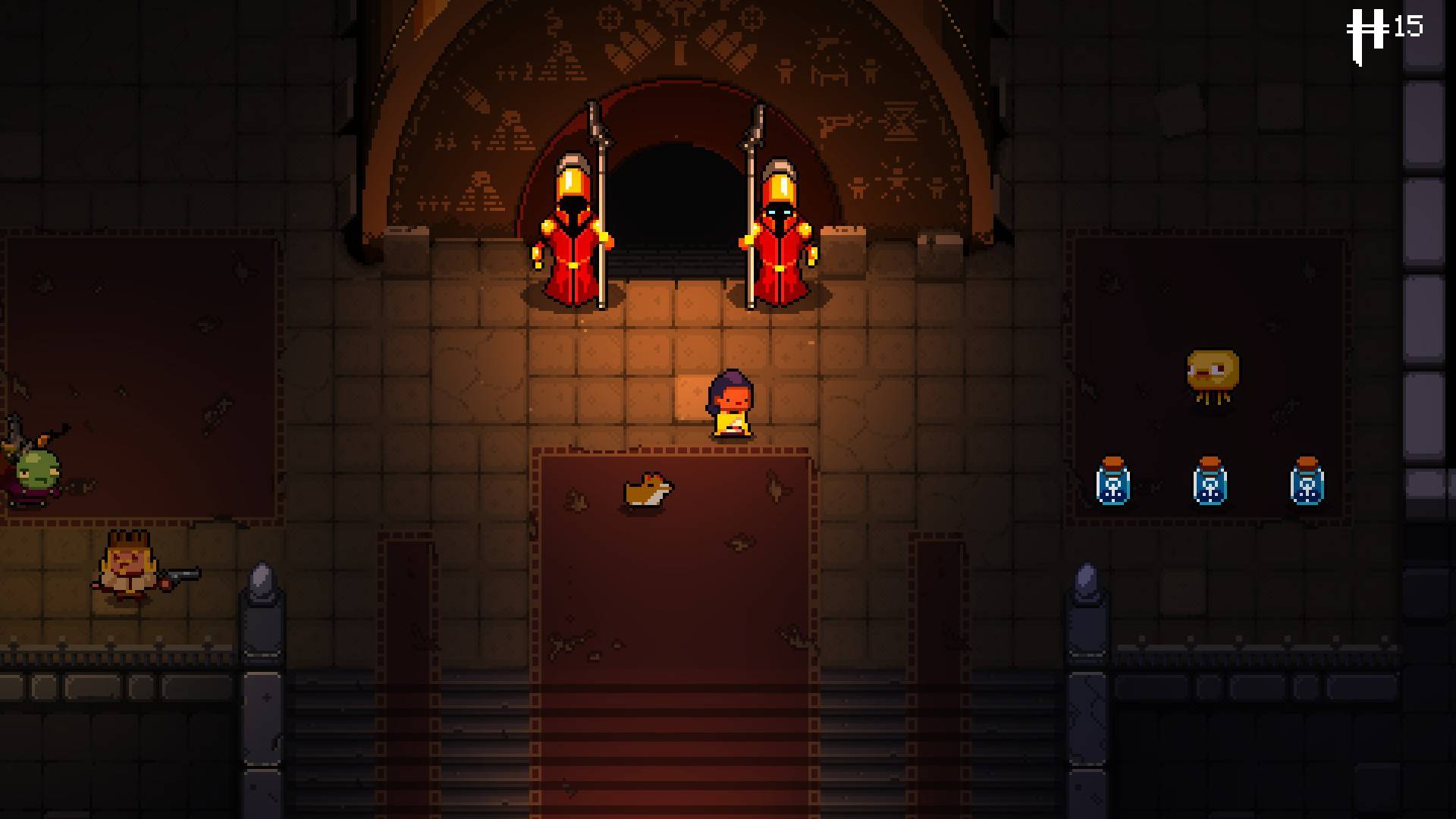 Enter the Gungeon is a top-down twin-stick shooter with rogue-lite elements, a particularly popular genre these days. Nuclear Throne is similar, as is Teleglitch, The Binding of Isaac, and many more that I'm probably forgetting. The basic gameplay is broken up into a series of rooms, with each room featuring some number of enemies that must be defeated in order to move on.

Dispatching these enemies is generally a task for your guns. Most encounters involve sprinting and dodge rolling around the room, taking potshots at the enemies when you get the chance. Standing still is a newbie mistake and you hate to see it. Meanwhile, the enemies are chasing you and firing weapons with various levels of insane. 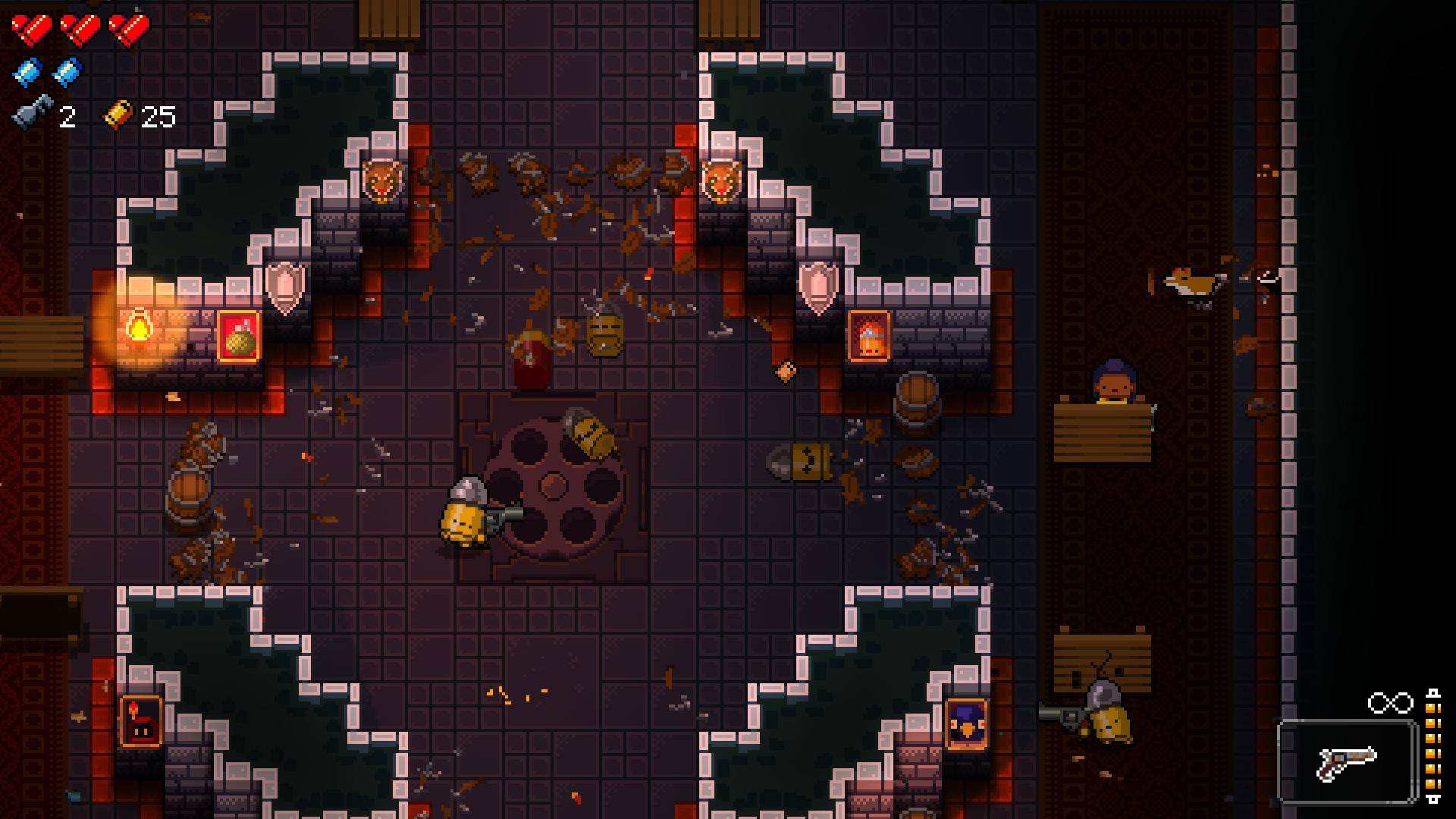 Dodging is a hard requirement here, as while you are dodging you are temporarily invincible. It takes a good bit of skill to know when and how to dodge in order to avoid getting hit. Various objects in each room can also be interacted with to give cover or change the field of play. For instance, tables can be flipped to provide a temporary cover location - but beware, as enemies can take advantage as well!

What makes Gungeon unique is its constant stream of insanity and silliness. A good number of enemies are bullets, with guns, that shoot bullets. The weapons and items you find range from the mundane "regular shotgun" to the absurd "lowercase r, which kind of looks like a gun" and the overpowered explosive and room clearing superweapons. Many of the guns are "inspired" by weapons from other franchises - you'll find stuff like the Ghostbusters' proton packs and Deckard's gun from Blade Runner. 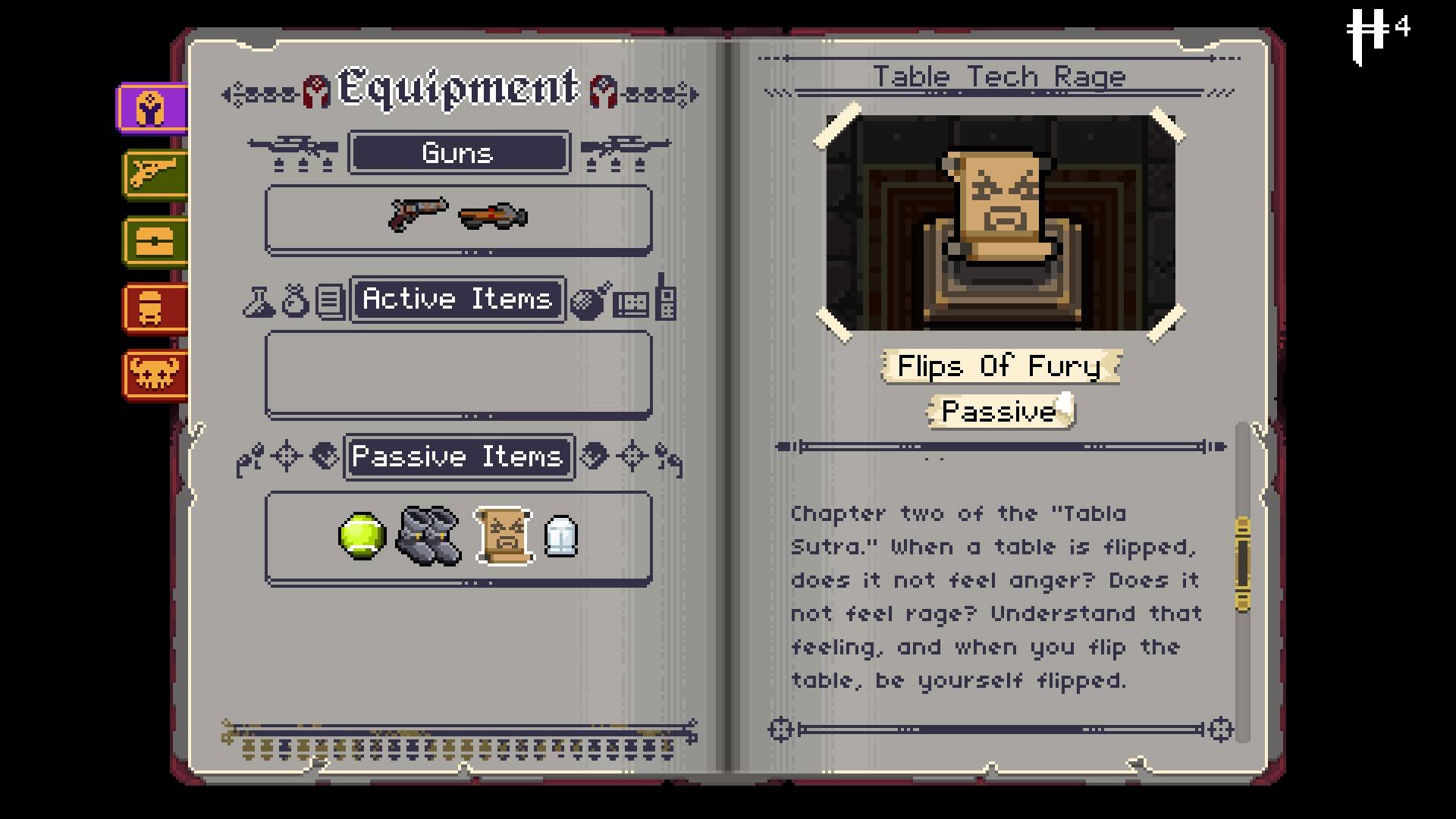 Everything about the game screams "how can we make this more fun?" That's something I can really get behind.

Since this is a "rogue-lite," death is permanent but some progress carries over. Chief among these is Hegemony Credits, which can be stockpiled and used to unlock new guns and items from the shop in the Breach. There are also a number of NPCs you can rescue, which provide benefits like allowing you to skip floors, or sometimes creating a room that heals you or gives you items.

Make no mistake, though, Enter the Gungeon is hardcore. There's no substitute for becoming skilled with the game's controls and maximizing your survivability by exploiting the game's mechanics. You're going to die, a lot, and that's just to be expected. The bosses especially have very complex, bullet hell-esque patterns that take quite a bit of practice to master. 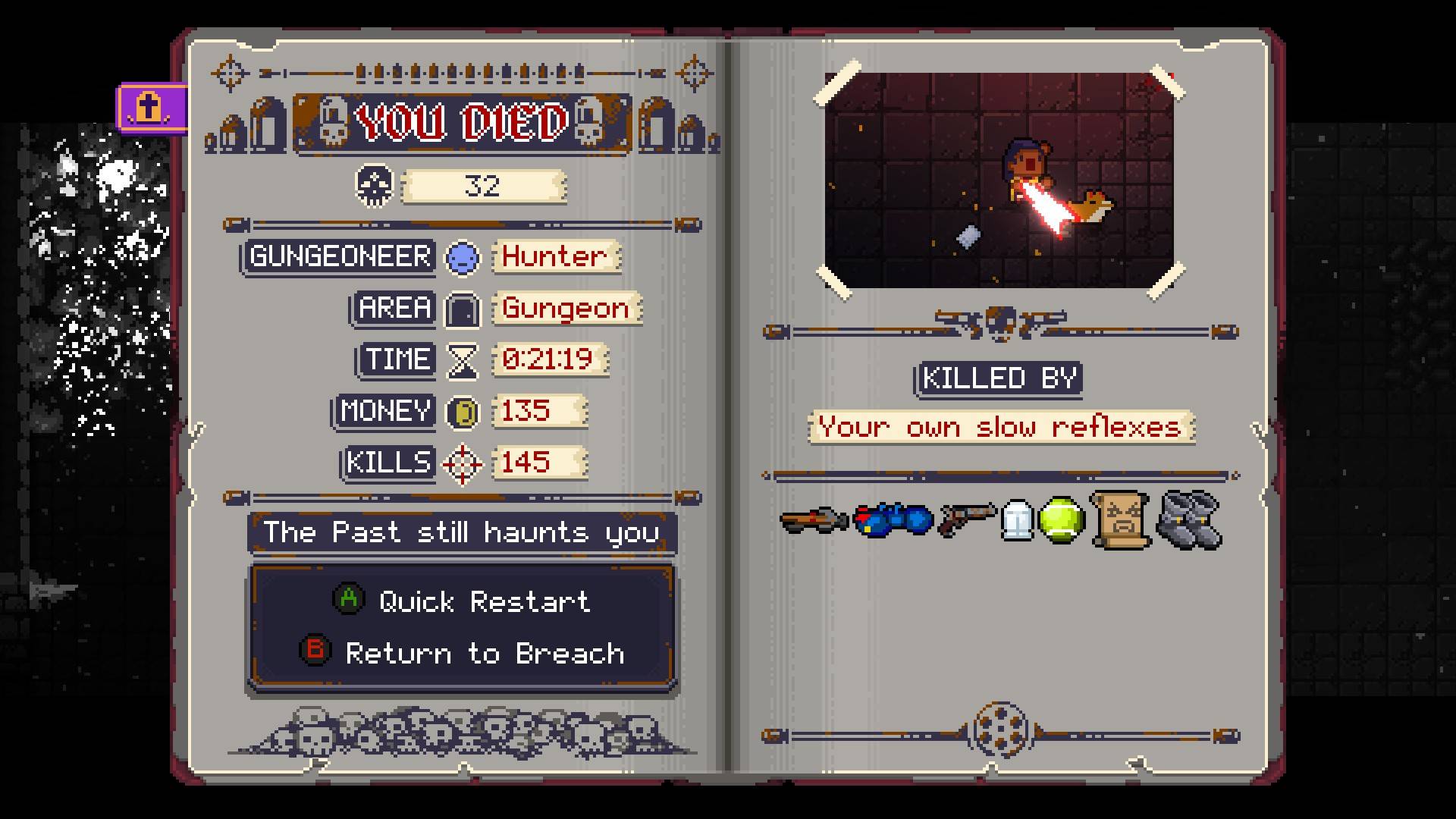 When I die in Enter the Gungeon (and I do a lot...) I find that often I know what I did wrong and am itching to try again and do better next time. Compounding that "one more run" feeling is the randomized loot, which means this next time might be easier, or at the very least it's highly likely to be ridiculous.

Even once you've cleared the five main levels (called "chambers" because everything has to be gun-themed), there's still a ton of secrets to explore. You can't even get the "good ending" without solving many of the game's bigger secrets. 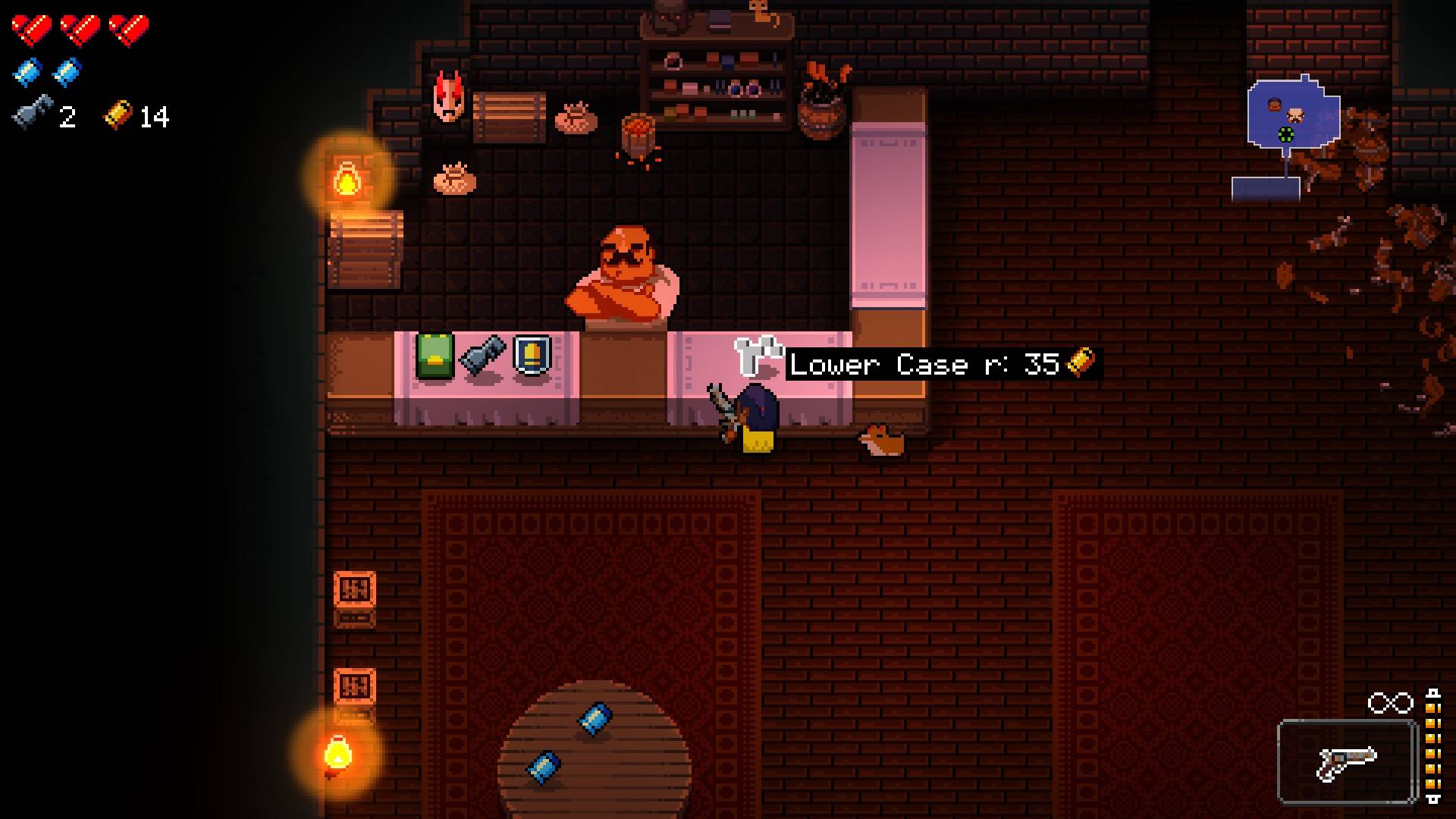