As part of the recent v1.16.0 update, DragonVale Gemstone Island Expansion is now finally possible. Backflip has added upgrade options to each habitat to increase their dragon and gem capacity. Ever since the Jade Dragon was introduced, folks have been begging for such an upgrade, but now that it is here you'll have to decide if and when to do it. The reality is that it is a pretty bad deal, and is really only a good option for collectors. Here's the breakdown: 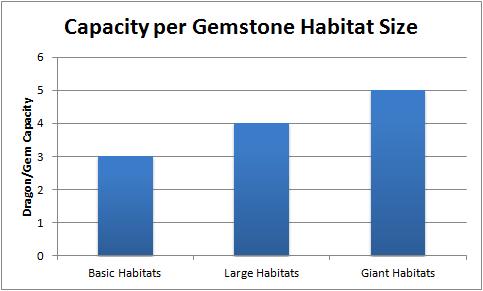 First let's take a look at what you get. You start with an island that has 4 habitats with 3 spots each for a total of 12 spots. This cost 400,000 DragonCash and is a pretty good deal, since it increases your potential per-week gem earning rate by 12 gems. The first upgrade gets you one extra dragon per habitat, and the second upgrade get you an additional extra dragon. Each dragon capacity upgrade also increases the max gem capacity by one. Assuming you actually have the additional Gemstone dragons to fill the spots, the upgrades will allow you to hold an additional eight dragons total in your habitats. 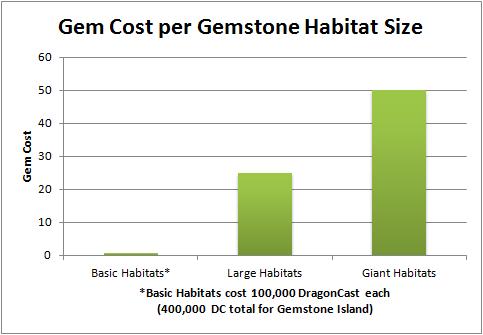 Sounds awesome, right? Right... until you check the price tag. At 25 gems each, upgrading all your habitats to 4 dragons will cost you 100 gems. The second level upgrade is 50 gems per habitat, rounding out an astounding 200 gems to get all habitats to 5. Those are some pretty large quantities. If you don't have some of the more valuable gem based upgrades like the Epic Breeding Island, or breeding building upgrades, you should definitely save your gems for those. You might be thinking to yourself - "Yeah, but the added Gemstone Dragons will pay for themselves". Read on... 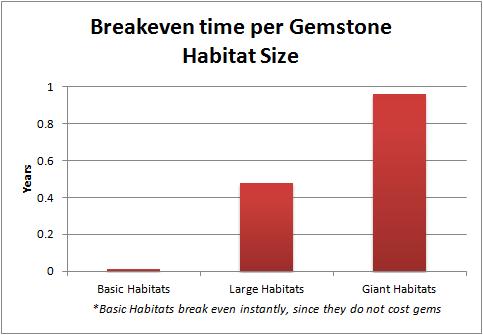 While it is certainly true that the Gemstone Dragons you add by expanding the capacity will eventually pay for themselves, consider two things

Update: It's been pointed out that I'm being a little dramatic by adding the habitat times sequentially to get the 2 and 4 year totals. These really are worst case numbers if you upgraded all habitats sequentially instead of in parallel (as most will probably do). If you upgrade the whole island in parallel it will take a little more than 6 months to break even on the first upgrade, and a little more than 1 year for the second. Still a long time, and a fairly poor investment given other options for spending gems.

All told, that is 300 gems and 6 years to recoup your investment in upgrading the entire Gemstone Island to Giant. While it will allow you to show off more dragons, and we can assume that Backflip will keep adding more, until their earn rate goes up significantly - there are a lot better things to spend your gems on.