Crush Your Enemies Review: What Would Conan Do?

Crush Your Enemies is one of a few games we saw at the Gambitious booth at PAX South, where the viking-helmet adorned team from Vile Monarch was on hand to ease us into the world of barbarianism. A couple months later, I scored a pre-release build of the game and streamed it. Now, the full version is available at the usual digital storefronts. I've had early access to the final release for a few weeks now, so I've done a lot of crushing! Now I'm ready to report on Crush Your Enemies in my full review!

Crush Your Enemies is a 2-D top-down grid-based real time strategy (RTS) game. The RTS genre boasts a wide range of sub-genres and there are tons of different ways for a game to make its own mark. Crush Your Enemies hews closest to games like Galcon with its core concepts.

Each level is divided up into square regions. These regions can be claimed by your team or your enemies. You can't cross an enemy region without first claiming it, which takes time. Units are produced automatically at huts on special squares. The more barbarians there are in a hut, the faster it produces. However, the max stack on a particular tile is capped at 50.

When your army meets an enemy army on the field, they get to crushin'. Generally speaking, numerical advantages hold the day. However, other special buildings on the map can outfit your generic barbarians with more powerful weapons and equipment. Stepping on one of these immediately changes the class of an entire stack of units. 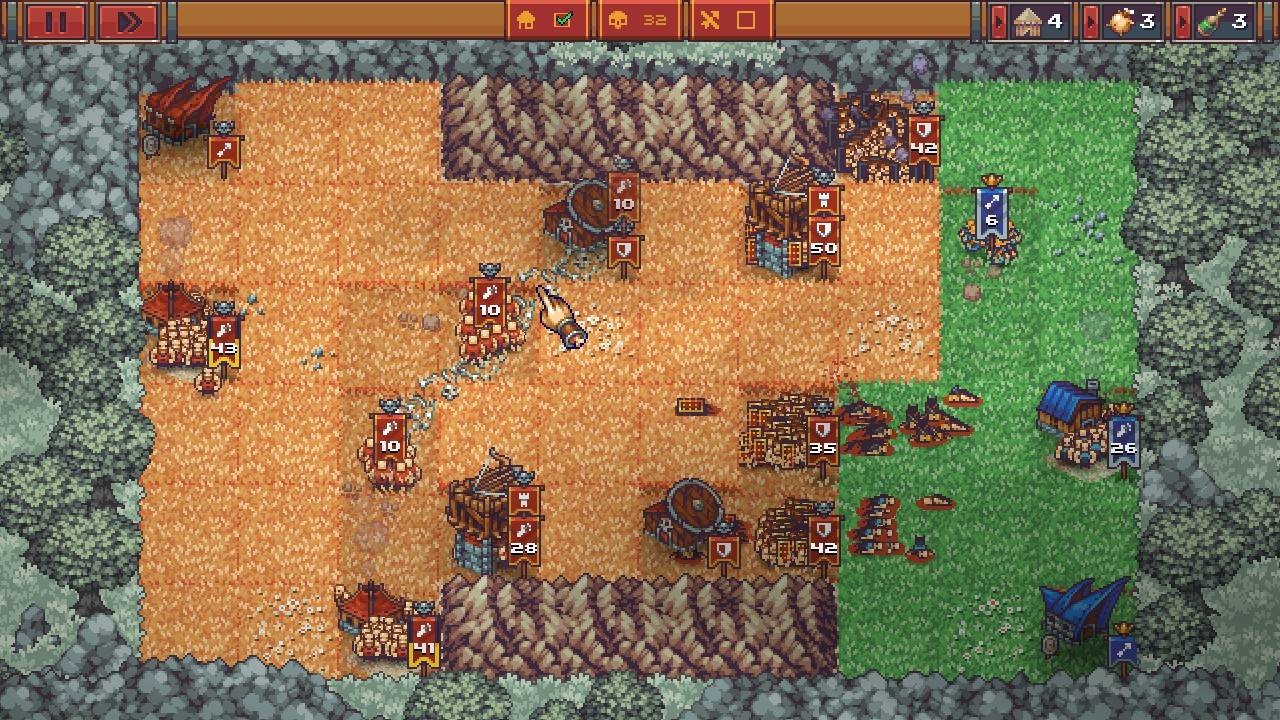 The core of the game revolves around managing your various stacks of units, moving around the map, and trying to capture strategic squares and/or buildings. Keeping the right balance of units and classes is key to victory, and moving your barbs around to take advantage of territory adds to the strategic depth.

The art in Crush Your Enemies evokes a sort of 16-bit aesthetic. The relatively small size of each level, coupled with the low res graphics gives the game an initial impression of simplicity. However, Crush Your Enemies quickly becomes devilishly complex and deeply strategic. Fixed crossbow towers, archers, giant slugs, beer as a currency... there's a lot of depth here. 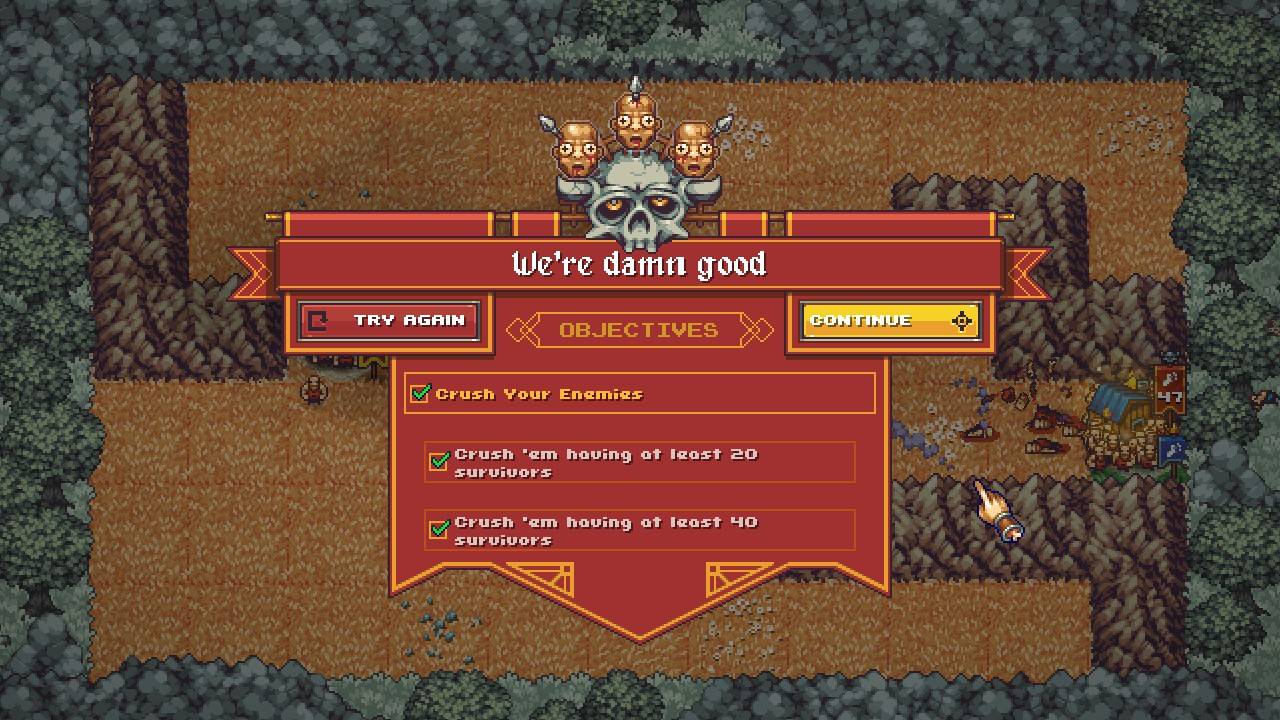 The plot is very stereotypical "manly man raaaar war!" - beer and violence and so on. It's very appropriate to the whole barbarian theme, and it never takes itself all that seriously. The second half introduces a lot of additional mechanics, and throughout the game new riffs and ideas are incorporated. The end result is a game that doesn't wear out its welcome. 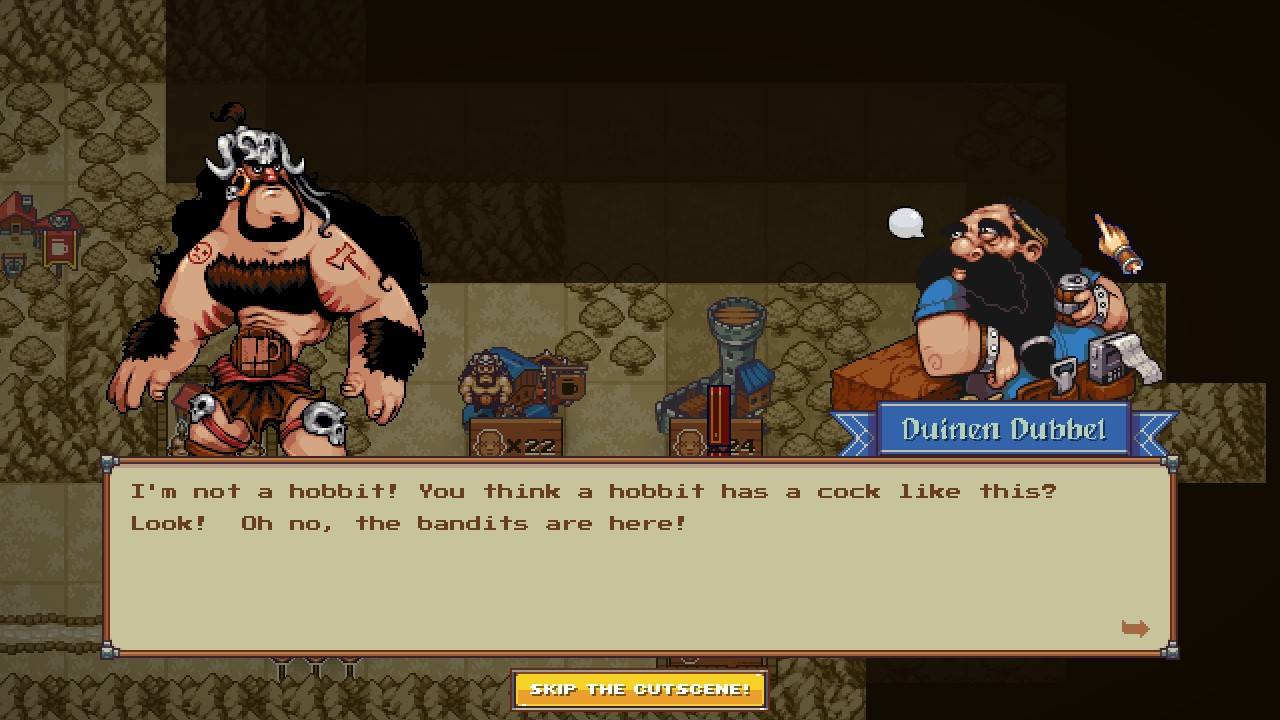 In addition to a pair of single-player campaigns, there's also a multiplayer mode where you can challenge your friends and see who is the better enemy crusher.

My main complaint with Crush Your Enemies is that it can often be tricky to manage and keep track of all the various stacks of units that are in play at any one time. The CPU is often moving several units at once, whereas it generally takes two or three clicks for me to get things moving on my end. I would like to see a "slow motion" mode where I can take a bit longer to think. (Thankfully, for times when you just need to wait, there is a fast forward option.)

In the second campaign in particular, the AI sometimes has a tough time coping with the resource management aspect of the game. For instance, if it is very weak, it will send all its troops to harvest meat, and leave none behind to recruit new barbarians. I've gotten into several occasions where I won a major skirmish against it, only to find that it was basically in a state where it couldn't recover.