How do I clear Pet Rescue Saga level 42?

Pet Rescue Saga level 42 is the last level of the second episode of Pet Rescue Saga. If you've played any Candy Crush Saga, you know that the last level of an episode is always a bit more tricky than those that came before. Luckily, there's a near foolproof solution to this level, and with my strategy you'll be done in a few lives or so. 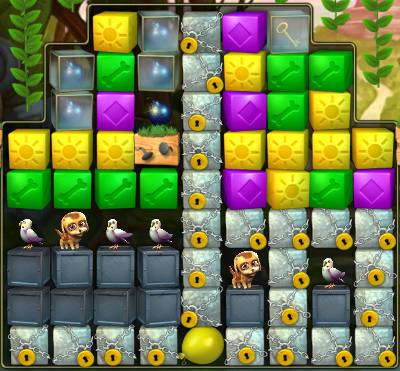 Pet Rescue Saga level 42 introduces a new "steel box" block that can't be broken by matching. The only way to break these blocks is via the rocket (or "Column Blaster" if you're using the official terminology) or through the use of bombs. Remember that to charge your rocket, you need to make big matches.

Luckily, the first goal on this level will make some big matches that will do wonders for your score and your rocket. The first thing you want to do here is to break open the key and use it to unlock the locked blocks. In my screenshot, I've just got two matches to do this, but hopefully on yours you'll have a similarly low umber to get through.

Once the key blocks have been cleared, you're likely to have the rocket charged. If not, make another match or two to top it off. 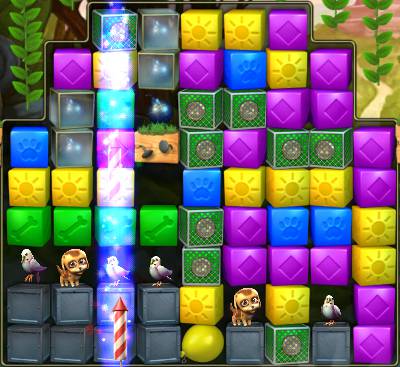 Okay, now you need to use the rocket as I've shown in this screenshot. This seems counter-intuitive, but what we really want to do is move those bombs down so that they can break the steel box blocks. Using the rocket here will put most of the bombs in the middle two columns of those 8 columns of blocks which means you should be able to clear them all easily.

Okay, now you've cleared the blocks and saved the four pets on the left. Now, on the right we need to charge the rocket again, twice so that we can save the other two pets. The game is throwing "x2" blocks at you inside cages, so focus on breaking the cages and matching a bunch of these x2 blocks together. This will charge your rocket and give you the points you need in order to clear the score goal for the level.

As your rocket charges, use it to save one of the other pets. You should have enough turns to save both plus meet the score goal. There is some luck involved, since the blocks that are dropping in are randomized. However, with this strategy I cleared the level 2 times out of 3 attempts, so if your luck holds, chances are pretty good you won't get stuck here long!