Few things perplex Clash of Clans players as much as this eternal question: "What should I upgrade next?" In part two of my Clash of Clans upgrade guide, I'll cover strategies specific to upgrading your defensive buildings.

If you missed the general strategies in part 1, click here to start at the beginning!

Defense upgrades are critical to keep your loot safe from invaders. When it comes to defense upgrades in Clash of Clans, there are a few general rules of thumb I like to follow. We'll tackle those first, and then we'll talk about priorities.

First, keep your defenses strong even while upgrading. Upgrading a defense leaves a big hole in your base. Try to minimize the impact of this hole. Space out the buildings that are being upgraded. Don't upgrade all of the same type of defense at once. These sorts of things will make you an easy target while you wait out the upgrade timer.

Second, upgrade the weakest defenses first. This may seem counter-intuitive, but think about it. We'll consider a simple example.

Let's consider a base having only two archer towers. One is level 8, and the other is level 1. You want both to get to level 10. Which should you upgrade first?

Another way of thinking about this is that in Clash of Clans the cost per HP and DPS increases significantly as the tower's level increases. Thus, the early upgrades give you more "bang for your buck."

# What Defenses to Upgrade First

The most important defenses are:

These defenses are the ones you should invest in first, and these should form the core of your base. Beyond that:

As I mentioned before, I suggest sticking your trap upgrades in when you can. I'm a big fan of the Air Bomb as it is a good area-of-effect air defense weapon.

It seems like everyone in Clash of Clans likes to neglect their walls. Walls are extremely important, even though there are many units that can bypass them. Walls force enemies to move in predictable patterns and keep them from moving quickly through your base. 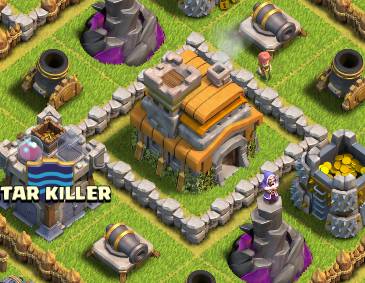 Raids that rely on a hybrid of units that bypass and don't bypass walls are still affected by them. Good wall placement can cause an attacking force to split up and get forced into areas where high damage can take them down easily.

The problem with Walls in Clash of Clans is that they're so darn expensive. Recently the game was patched to allow either gold or elixir for wall upgrades, but still it's a crazy amount of resources to invest.

Bear this pain, though. Especially at Town Hall 7, I highly suggest that you max out all your walls. The cheap loot at this level is much easier to get than it will be otherwise. You can undo several levels worth of bad wall decisions here if you can bear the expense, and it's well worth it.

Hopefully this guide has helped you to demystify Clash of Clans upgrades, and now you feel confident setting an upgrade path for your own base. What did I miss? What important strategies do you follow? Let me know in the comments.