Man, the difficulty of Candy Crush Soda Saga has sure ramped up quick, hasn't it? Just wait until we hit level 18, where the rubber really meets the road. Let's see if we can make it to 20 without throwing our phones in frustration.

Level 16 is really funky. The level looks like a spiral, and the candy moves around it in a spiral pattern. This can make predicting the way candy will fall super tricky. It's like there are three extra long columns that run the whole length of the spiral. 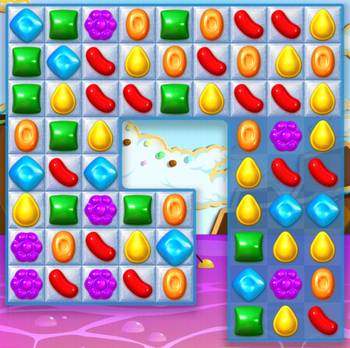 As with previous frosting levels, there is way more frosting than there are bears. Keep an eye on the color of the frosting, as I mention in my Candy Crush Soda Saga guide so you know which squares need to go and which are red herrings.

The wrapped candy really shines here, with the weird way the candy flows. The fish is again underpowered, as it will seek out frosting that is pretty useless.

My first run through this, I lost a good 4 or 5 lives. My second time through, I cleared it with 3 stars on the first try. There's a lot of luck involved, but don't give up!

Wow, five bears! And no soda! This level looks weird to start out with. At the beginning, you can make a fish + fish combo, which releases 3 fish. Each new section of the level is intended to teach you a fish special combo. There's no way to lose, though. Just keep following the hints and you'll be through in no time flat.

Back to frosting and bears, this time with more licorice cages. Remember that these caged candies can't move, and have to be broken a total of twice. 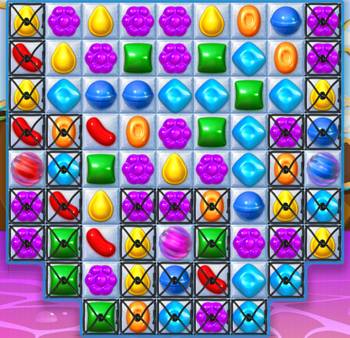 There's a few coloring candies hiding out here too, so chances are this whole board is going to go up in a massive explosion at some point. Try to use these in special candy combos if you can, but it can be tricky to get other special candies into the far left and right columns.

Late in the level, you can try going for fish candies or fish + fish combos if you've got just a few squares of frosting left to clear. It's a bit luck-of-the-draw if they'll break the frosting you need, but a last minute Hail Mary fish has saved me more than once.

This is the first really hard level, in my opinion. Plan to spend some time or some boosts here in order to get the luck you need to win.

Now we've switched back to bears and candy strings. All these level changes are making my head spin... :P

In the first section, there's a premade striped candy match ready to go. That will shoot the bear up a whole screen, but first you may want to make any special candies that you can on this screen before you go. The top two rows of this screen move on, so if you can put a color bomb or something there, it's probably worth it. Failing that, you could also benefit from some fish in this next section.

Now we're approaching the top of the soda, so breaking soda bottles is the most important thing. You can match candy above the soda line, or make fish wherever you can. Much like a lot of the levels so far, winning this one is going to take a combination of luck and a lot of special candies.

Ah, this is a pretty typical Candy Crush scenario - cake blocking an area you need to match in, plus a board area small enough to make special candy matches tricky. There are 16 bears of various sizes, but here again not all the frosting is important.

Focus on breaking the cake so that candy can pour into the right side. The right side is upside down (for whatever reason...) but it's mainly going to mess with your head rather than change the strategy.

Horizontally striped candy can break frosting on both halves of the level, so that's a priority. Wrapped is slightly less powerful here, and fish are downright useless until you're very close to the end. I actually came down to just two frosting squares on my last move, and only one blocking a bear. I matched a fish and it picked the wrong one :( Another life down...

Next up on Candy Crush Soda Diaries: To be continued...!