Now that we've covered the basics in our aptly-named Basics Guide, let's dig in deep and explore the world of Brave Frontier units. 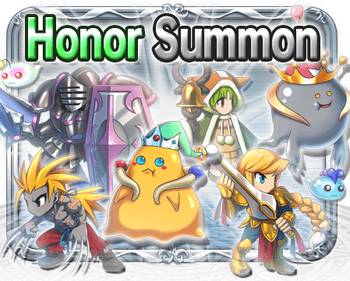 There are several ways to get new units:

Your units are stored in your inventory, and there is a maximum number of units that can be stored there. If you go to the "Shop" menu, you can spend Gems to unlock additional unit slots.

Each unit in Brave Frontier has a set of stats that determine how effective they are in combat: 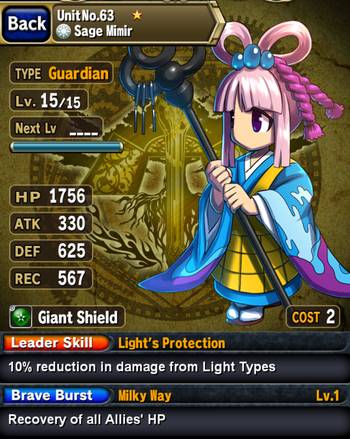 First up is the Element. Each element is strong against certain elements, and weak against others. We'll go into detail about what elements are strong against which other elements in the Combat Guide.

After that is the Level, which is increased by Fusion. We'll cover Fusion later.

Next is the Type. The Type determines how the unit's stats scale as they level. The types are:

Brave Frontier FAQ What's the best Type? The best type is going to vary based on what your priorities are for a unit. If you're raising a powerful attack unit, you might want to further boost its attack via the Breaker type, or you might want to make it survive longer with the Guardian type. The Oracle type seems particularly weak to me - better health recovery at the expense of maximum HP seems like a recipe for disaster.

Each unit also has a Rarity which is expressed as a number of stars. (A shout out to Redditor weaseldude for pointing out I neglected to cover this topic!) Rarity has a number of effects:

When units Evolve, they tend to move up to the next tier of Rarity. Most units can only evolve a few times, though, and the highest Rarity monsters are only available if you Summon them with Gems.

Finally, there are the numeric stats:

Squads are groups of units that you use for quests. You can have up to 10 squads of 5 units each. As you can only use one squad at a time, a unit can be in multiple squads at once.

Each unit has a "cost" attribute, which is a way of limiting the overall power level of your squads. As you complete quests, you will level up. One of the side effects of leveling up is the maximum cost of your squads will increase.

There is one special slot in a squad, and that's the Leader. The squad leader gets to use their (usually passive) Leader Skill to assist the entire squad in battle. Pick your leaders carefully, so that you can get the most out of these benefits!

Spheres are equippable items that you can build in the "Spheres" hut of your Town. We covered the town in the Basics Guide, so feel free to drop back if you're feeling confused or jumped into the middle!

Each unit can equip a single Sphere at a time. The higher the level of your Sphere hut, the more powerful Spheres you can create.

Brave Frontier Tip Many top-tier Spheres require "Honor" items that can only be gained as gifts from friends - make friends and share often as early as you can to build up a stockpile!

In order to make your units more powerful, you've got to fuse other monsters with them to give them experience and help them gain levels. To perform Fusion, tap the "Units" button and then the "Fuse Units" button. When you get to the Fusion screen, you'll have to select the unit which will gain experience, and then select up to 5 units that will be transformed into experience for the first unit. Do note here that these units "fed" to the base unit are gone forever! 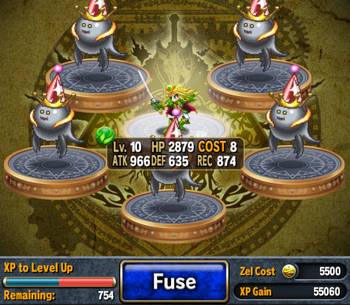 Fusion costs Zel, and the formula is pretty straightforward:

Thus, the higher the level of the base unit, the higher the Zel cost. This means you should generally fuse as many monsters as possible at once. If you fuse several times in a row, and the unit gains levels between each fusion, you'll end up paying more for each fuse.

Brave Frontier Tip If you fuse with monsters of the same element, there is an additional multiplier to experience gained. Whenever possible, match up your elements when fusing!

There's a chance that any given fusion will grant bonus experience. This is random, however, and is impossible to predict.

There's also a chance that the base monster's Brave Burst will level up if they're fused with monsters that have the same type of Brave Burst. There are three types of Brave Bursts - Damage, Healing, and Support (ie, Defense Up). Leveled up Brave Bursts are more powerful than their unleveled versions.

Even if a unit is at their maxed level, you can still fuse monsters to level their Brave Bursts, to a maximum of level 10. (Thanks again, MistaBaux!) Apparently, fusing at max level doesn't follow the "standard" fusion formula, and is significantly cheaper by comparison. (Thanks trauminus!) Do note that if you plan to evolve them, evolution resets this level back to 1, so it's best to max out evolution first before Brave Burst level.

Brave Frontier Tip "Metal" monsters are prime fusion food. They grant a ton of XP. They are also not useful in any particular capacity outside of giving XP. (Thanks to thenlar for correcting my statement regarding evolution!)

Many units can evolve into a stronger form once they reach the maximum level. In order to do this, you'll need a specific set of monsters to fuse with. 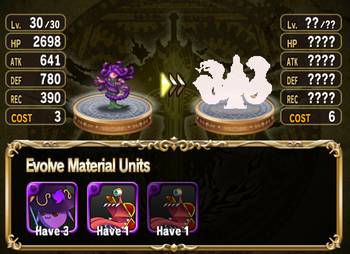 When viewing the evolution screen, you'll see how many of what type of units are required for an evolution. If you've never caught a monster, that monster's portrait on this screen will be marked with a "?"

Brave Frontier Tip Evolved monsters reset to level 1, and remember that they have any Brave Burst upgrades removed. Keep that in mind if you're trying to level up your Brave Bursts!

Once a unit evolves, it will morph into a more powerful version of that unit, but its experience will reset to level 1. Usually when evolving, the unit will gain a level of Rarity. For instance, a 1-star creature will tend to evolve into a 2-star creature, and so forth.