Big Pharma is the second release from developer Twice Circled, (a.k.a. Tim Wiksteed) and the first to be published by Positech Games. In Big Pharma, you are in charge of a drug empire (the legal kind...) that is just getting started, and you have to carefully research and develop medications to meet the needs of customers-slash-patients. I grabbed a review copy late last week and spent most of the weekend zoned out making questionably effective creams. How does this factory management/business sim stack up? It's time for a Big Pharma review.

Related Video Check out our Big Pharma Let's Play on the Without the Sarcasm YouTube Channel!

Big Pharma has a combination of game elements from the factory management and business sim genres. The isometric "production" interface will immediately look familiar to players of games like Factorio and Infinifactory. The goal here is to lay out machines to take inputs - in this case, drug ingredients - and produce medications as outputs. The machines in Big Pharma primarily adjust the concentration of the active ingredient, which is measured on a scale of 1 to 20. For instance, an Evaporator, one of the simplest machines, will increase the concentration by 1. 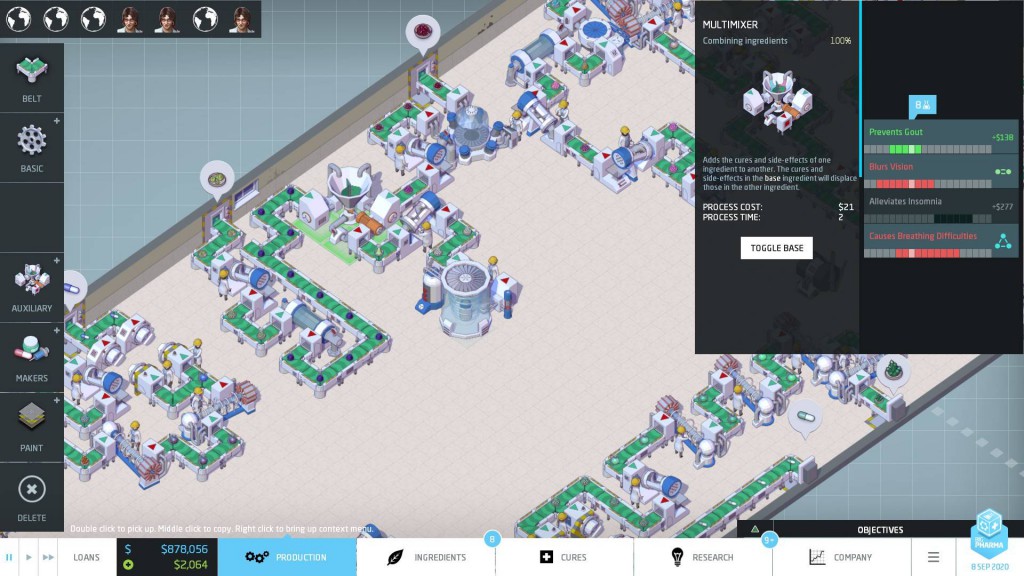 Each ingredient has a number of effects. One is usually good, and up to 3 others are generally bad. The concentrations at which these effects are active varies. Thus, you need to adjust the concentration of the inputs in order to maximize the positive effects while avoiding any nasty side effects. Once the concentration is just right, you can then turn the drug into some usable form, like a pill, and ship it off to patients around the world. Just basic arithmetic - sounds simple, right?

Big Pharma is simple at first, and then it quickly becomes drastically more complex. When positive effects reach certain concentrations they can react, or "level up" and become more valuable effects. Similarly, negative effects can be removed if the concentration and correct machine are applied. Sometimes, these reactions require catalysts which are only present on other drugs. Now you've got to mix drugs together, carefully balance the concentrations, avoid side effects, and keep a close eye on how much factory floor space you've got left. 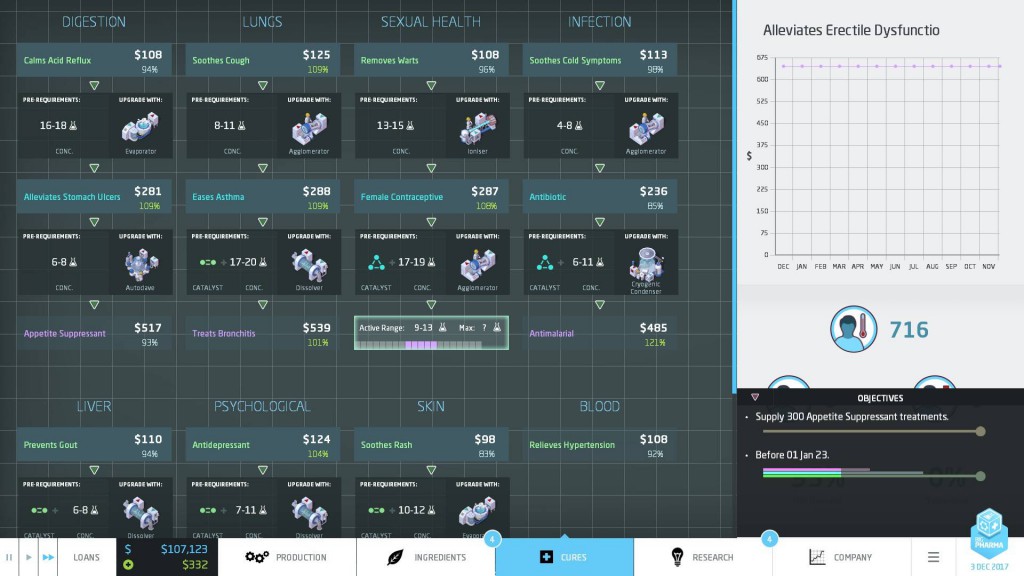 Drug effects can level up repeatedly, with the most powerful effects (like "Cures Cancer") requiring long, complicated chains of different reactions to properly pull off. Before you know it, every last square of your factory is packed with gear, you've spent hundreds of thousands of dollars, but your profits are enormous.

# Being a Good Drug Dealer

All of this factory management stuff isn't worth a hill of (rare, African Itch-Relieving) beans without managing the rest of your business. These rare ingredients don't just find themselves, so you've got to hire explorers and send them out to search for new compounds to experiment with. Likewise, adjusting concentrations in steps of 1 is only going to get you so far, so you need a team of scientists who can research new machines and improve their efficiency. 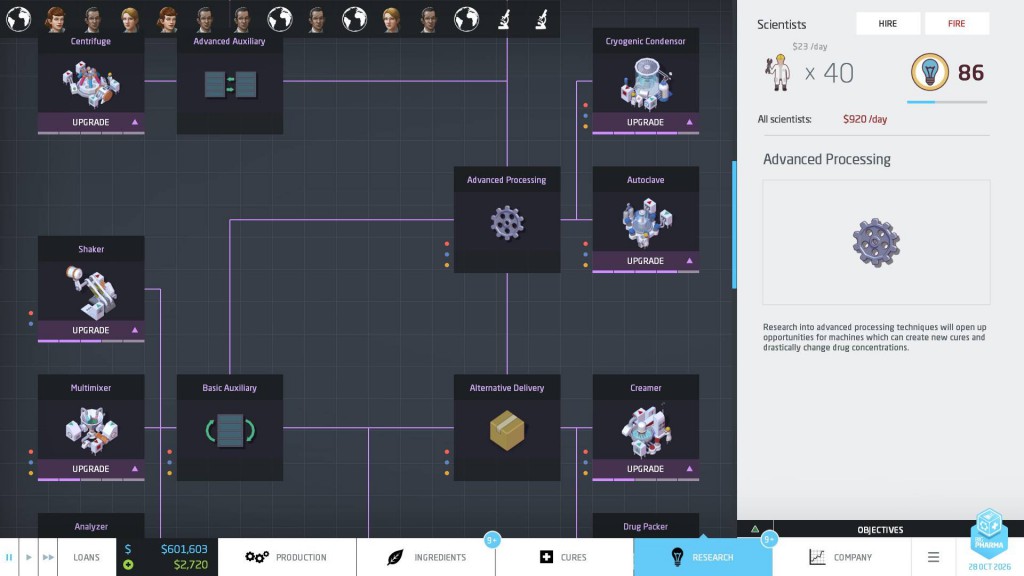 Pro Tip Explorers aren't quite as important as scientists, especially in the early game. Explorers are more costly to hire and cost more per day, and do less for your factory. You need better equipment and equipment upgrades much more than new/cheaper ingredients, usually.

Meanwhile, the market for drugs in Big Pharma is shifting constantly under your feet. People get sick, but sometimes they get better, lowering the demand for your drugs. Shocking, I know. Competitors may attempt to horn in on your market by releasing similar cures, and you'd better believe you'll be fighting over patent rights on your supermeds. All of this combines to keep your drug empire on its toes. 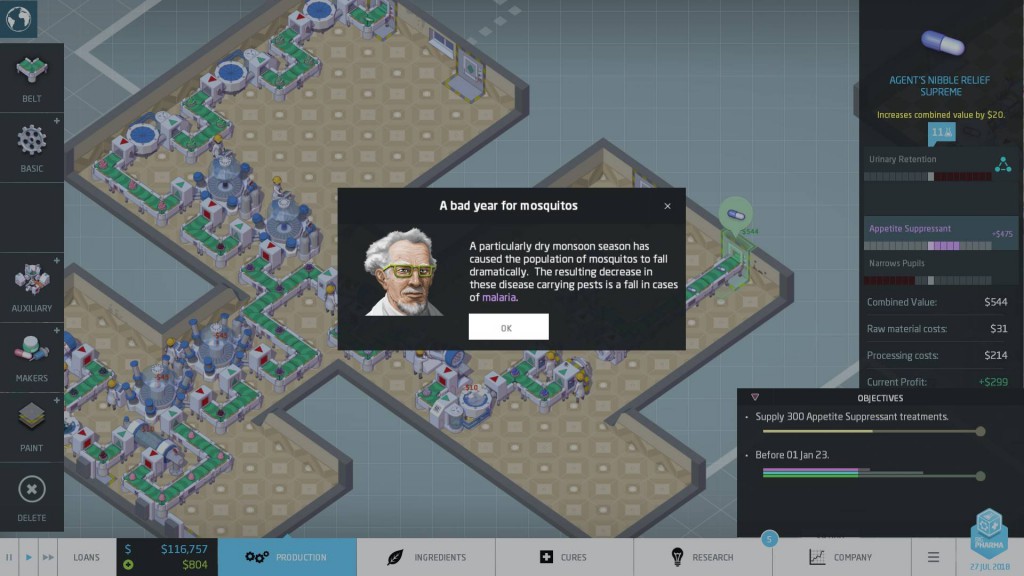 There's a fair amount of drug industry satire here, if you're inclined to notice it. The factory is relatively dingy, with stained walls and grimy floors. Big Pharma also doesn't care that much at all about curing people - the goals are generally focused on maximizing revenue or meeting production quotas. If your drug isn't perfectly optimized it might not do as well in the market, but often perfecting a medication yields less profit than just slapping something together and shipping it. Some of the "best" drugs in the game actually cure people, thereby reducing demand. This makes these cures worth less in the long run than drugs which simply relieve symptoms.

Big Pharma is a game I found myself losing track of time with. Much like wanting to play "one more turn" in Civilization, I found myself constantly wanting to try just one more thing, or shift that machine over there and see if I can cram one more production line here... I start playing Big Pharma, and then it's 3 hours later, I'm starving, late for work, and haven't been to the bathroom. 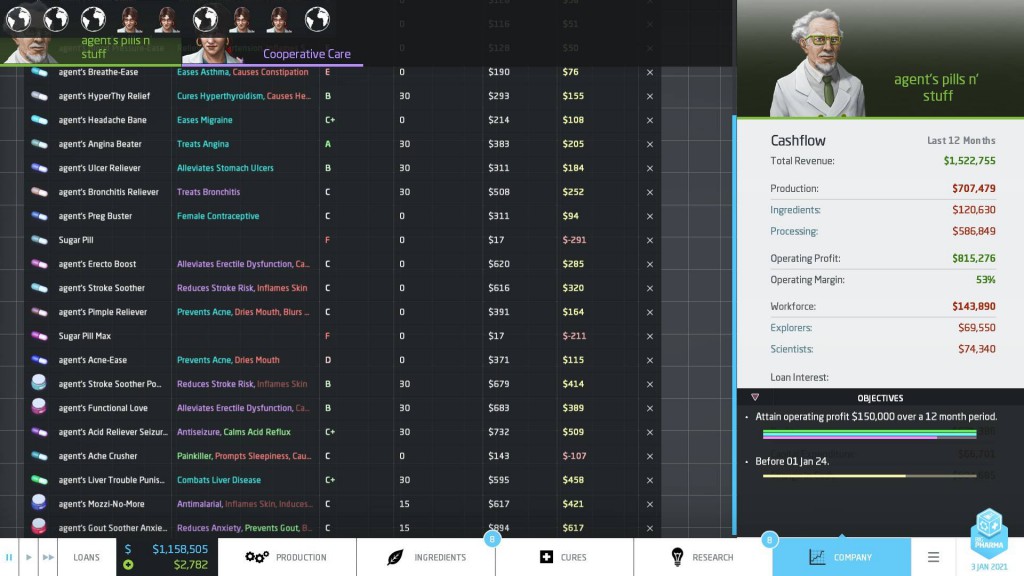 Beyond the destabilizing economic elements, the various shapes of the machines keep me challenged. It's like playing factory Tetris. The various buildings are also occasionally weird shapes, with narrow halls, odd L and U bends, and other features that have to be worked around.

Big Pharma comes complete with a wide set of scenarios, starting pretty easy and ramping up to very complex. Each scenario has 3 different difficulty levels for its objectives, and the scenarios are somewhat randomized each time you play. A typical middle-of-the-road scenario might take 4-6 hours to play, and there's a good 40 scenarios in the base game. Modding is supported, as well. Basically, if you're enjoying the game, you could play it for hundreds of hours out of the box or rip it apart to your heart's content.

# Side Effects May Include...

Big Pharma's got a few rough edges. Any time you play a game for dozens of hours, the burrs on the interface are going to start to irritate. The production tab is where you'll spend most of your time, but extracting relevant right information out of the other tabs can sometimes take more clicks than I'd really like.

Machines can be rotated, but not flipped or their inputs swapped (as far as I can tell). This can make for some awkward designs, especially when you're trying to use multiple of the same machine to process the same inputs.

Pro Tip Mixers are especially prone to this - I found myself importing the same input in two different sockets to get around the limitations.

Big Pharma's complexity is also sometimes daunting. I've gotten 80% of the way through processing a drug, then realized I don't have the space to finish the reaction. Sometimes instead of space, it's money - especially in the early going or when you're new to the game, having to place and remove conveyors can quickly bankrupt a fledgling enterprise.