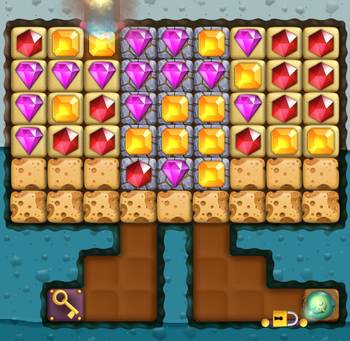 The Gems in Diamond Digger Saga are very similar to the colored blocks in Pet Rescue Saga. Both require you to tap groups of 3 or more of the same color together in order to clear them. Gems continue to fall from the top of the level to replace gems that you've already cleared, as long as there aren't any stones in the way.

Dirt in Diamond Digger Saga is similar to jelly from Candy Crush Saga. Gems can be in the same square as dirt. If you clear the gems, you clear the dirt as well. Dirt keeps water from flowing, however.

Pro Tip Some dirt has gold stripes through it, and when cleared you'll get a score boost. The score boost increases the deeper you go, so clearing the gold striped dirt on the first screen isn't worth nearly as much as it is when you get towards the bottom of a level.

Stones in Diamond Digger Saga are similar to meringue in Candy Crush Saga. They block squares and won't allow gems OR water to pass. Matching next to stones helps to clear them.

Pro Tip Gems can move diagonally past stones, but water will not!

The other major game element is Water. Water needs to reach the exit in order to move on to the next part of the level. Water is blocked by dirt and stones, so these must be cleared out before you can proceed.

In addition to increasing the depth, water must touch certain things in order to collect them. For instance, fireflies and keys must be touched by the water in order for them to count as collected.

Pro Tip When water flows, it fills all available spaces before moving on. Thus, if you need to get a Firefly before continuing, you can let the water flow to both the exit and the Firefly at the same time.

Just like previous King games, there are new block types that unlock as you proceed through the game. Hopefully, though, this gives you the basic idea of how the game works.

In many levels, you don't have to get all the way to the bottom to win. However, getting to the bottommost depth can help. Every time the depth increases, you get two extra free moves. 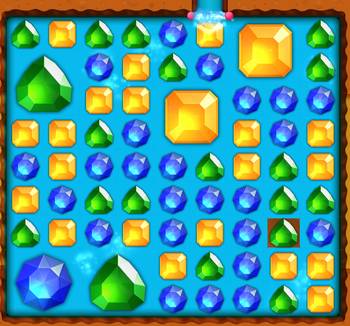 In score-based levels, usually getting all the way to the bottom gives you a Treasure Room. Treasure rooms are filled with gems, and any square of 4 gems becomes a massive gem worth tons of points! This can easily dwarf the treasures you find in previous rooms, so it is super worth it to increase the depth when going for score.

In objective levels, like "wake the firefly" and "collect the toys" levels, increasing the depth will bring you to new screens where fireflies and toys may reside.

Warning! Be careful when digging deeper, though! Items like toys and fireflies can be missed. Sometimes this isn't the end of the world, but it can make the levels harder. Fireflies, toys, and other things that can't be missed without failing the level will have a little exclamation point over their squares.

# Keep your eyes on the prize!

All of these different elements can combine to create some confusing situations. Should I match the dirt with gold streaks to get extra points? Should I let the water flow past this screen, or should I focus on matching where I am now?

Some of these things you're only going to learn as you play the level a few times to get the hang of the individual challenges each level has. However, there is one general tip I can give.

Focus on the goal of the level.

Pro Tip Check the score requirements - on some of the objective levels, there's no score requirement to get 1 star. Ignore the gold dirt blocks in this case. That leaves you more moves to focus on the real goal! 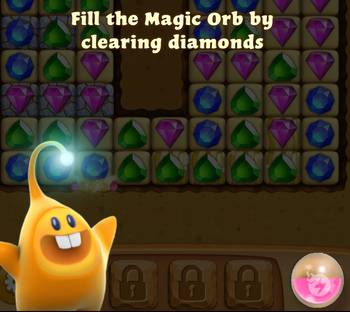 The orb charges up as you clear gems. Once charged, though, any gems you match won't count towards charging it any further. Therefore, you should carefully plan when you want to use your free magic orb boost. If you leave it charged all the time, you'll miss out on free boosts. But if you use it up and then realize you need it, you'll waste a lot of moves charging it again.

Hopefully this guide has helped you understand the basics of Diamond Digger Saga. With these tips, you'll have a leg up regardless of the level!

Have you given Diamond Digger Saga a try? What did you think? Tell us in the comments!