Clash of Clans is a juggernaut of portable gaming, but if you're late to the party (like me) you may have trouble understanding it at first. I found the Clash of Clans tutorial to be lacking, so I wrote down all the Clash of Clans tips and tricks I could think of. In part one of my Clash of Clans beginner's guide, I'll cover the early game - what to build and what to prioritize in your first few days of play.

Gems are the premium currency in Clash of Clans. I'm starting my beginner's guide to Clash of Clans here with Gems for an important reason - free ones are in limited supply, and if you plan to play without paying much money, it's very important that you conserve them.

In general, Gems can be used to speed up the timers on almost anything. They're the ultimate "I don't want to wait - I want it NOW" button. That said, speeding things up with gems in the early game is generally a waste. You should be saving them to purchase more Builders.

Clash of Clans Tip The "guide" lady will want you to spend your gems to rush things early in the tutorial. You don't have to do this, and you can instead just wait out the timers to save your gems. (Thanks to Redditor phibbus for this suggested tip)

Builders are an important thing to understand as a beginner in Clash of Clans. In order to build or upgrade buildings, you need free builders. The game gives you 2, and more cost Gems - lots of Gems. 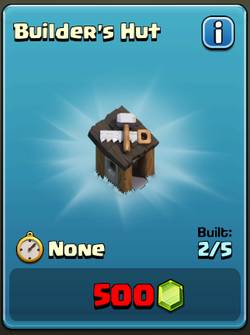 You'll earn some free gems by clearing items from your base (ie, the rocks, logs, trees, etc will sometimes drop gems when cleared), and from earning Achievements. It takes a while to save up enough for a third builder, but it's well worth the investment.

Clash of Clans Tip Clearing rocks and trees quickly becomes a cheap thing to do, and it's an easy way to get gems for builders. They slowly respawn in your base up to a limit. Make sure you clear them when you can! (Thanks again to phibbus for this suggestion!)

When you first start Clash of Clans, your first priority is building up your resource production capability. There are two major early-game resources in Clash of Clans. They are:

There are two types of resource-related buildings. One is actually responsible for producing the resource, and the other just exists to store it. The production buildings for gold and elixir are the Gold Mine and Elixir Collector, respectively. The Gold Storage and Elixir Storage buildings store their respective resources, naturally. 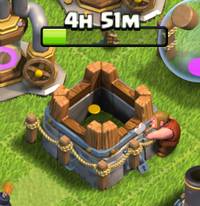 As you can see, you're going to need a lot of both resource. Thus, you should focus on building as many of these buildings as you can, and upgrade them early and often. You're able to build multiple of each of these, so I'd suggest building new ones whenever the option is available.

Upgrading is an important part of Clash of Clans, so it gets its own section in our beginner's guide. Each building can be upgraded to make it generally "better" at whatever it is that it does.

In the very early game, you're going to want to focus on building and then upgrading your Elixir and Gold production and storage buildings. Upgraded production buildings will produce faster and hold more before they're full. When they're full, they stop producing until you tap on them so it's important that they hold as much as possible. Upgraded storage buildings just... store more. Not particularly exciting, but still, a very good thing. There are a lot of things in the game that cost a very high amount of Elixir and Gold, and until you can store at least that much, you're never going to be able to buy them.

Here are some other tips for prioritizing upgrades: 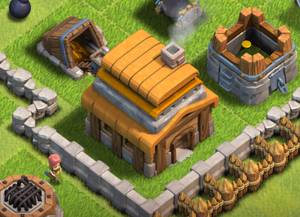 Pro Tip Leave your town hall upgrades for last. You don't need to upgrade every last wall segment, but at least max out your barracks and your resource collection/storage facilities. Having a low-level Town Hall makes you less of an attractive target for high-level raiders, as the amount of resources they can steal is limited by your low Town Hall level. (Thanks to kev12432 and z4chn45ty for pointing out an error in this section.)

Other Things to Consider

Scattered around your Clash of Clans base are various obstacles that can be removed. Some of these are small and only require a small amount of Gold or Elixir to banish. When you've got some time to actually sit with the game and play, and a free builder, you might want to concentrate on a small area and remove a few of these. This will make sure you have a nice-sized "clear area" to work with later when you're designing your defenses. There are a limited number of wall pieces to work with at first, and there's no point in walling in logs, mushrooms, or tiny rocks.

But... What About Defenses and Troops?

For the first couple of days, you're protected by a shield - you can't be attacked until you first attack someone else or this initial shield runs out. My suggestion would be to "turtle" for these first few days and build up a war chest to fight with.

If you've got some short military projects you want to undertake and an excess of a particular resource, it might make sense to do a few things for your defense or offense. However, some time and effort involved in your resources now will pay big dividends later. You can leave your defenses to the last day of your initial shield and still be just fine.