Another of our favorite games from the show floor at PAX South 2017 was Pixel Crow and 11bit studios' Beat Cop. An 80's inspired cop drama/mystery? Sign me up! We checked out the pre-alpha build after the con to see how things were progressing, but now that the final version of Beat Cop has been released, let's return to the crime scene and pass final judgement! Get your cuffs out, it's Beat Cop review time!

Beat Cop feels like the love child of Police Quest and Papers, Please. There's a fair amount of running from place to place, dispensing law and/or street justice. The bulk of Beat Cop is running up and down the street, enforcing parking and vehicle maintenance laws. Writing tickets is similar to Papers, Please in that you're given a short window to examine the situation, and have to make a call about how to enforce the law. 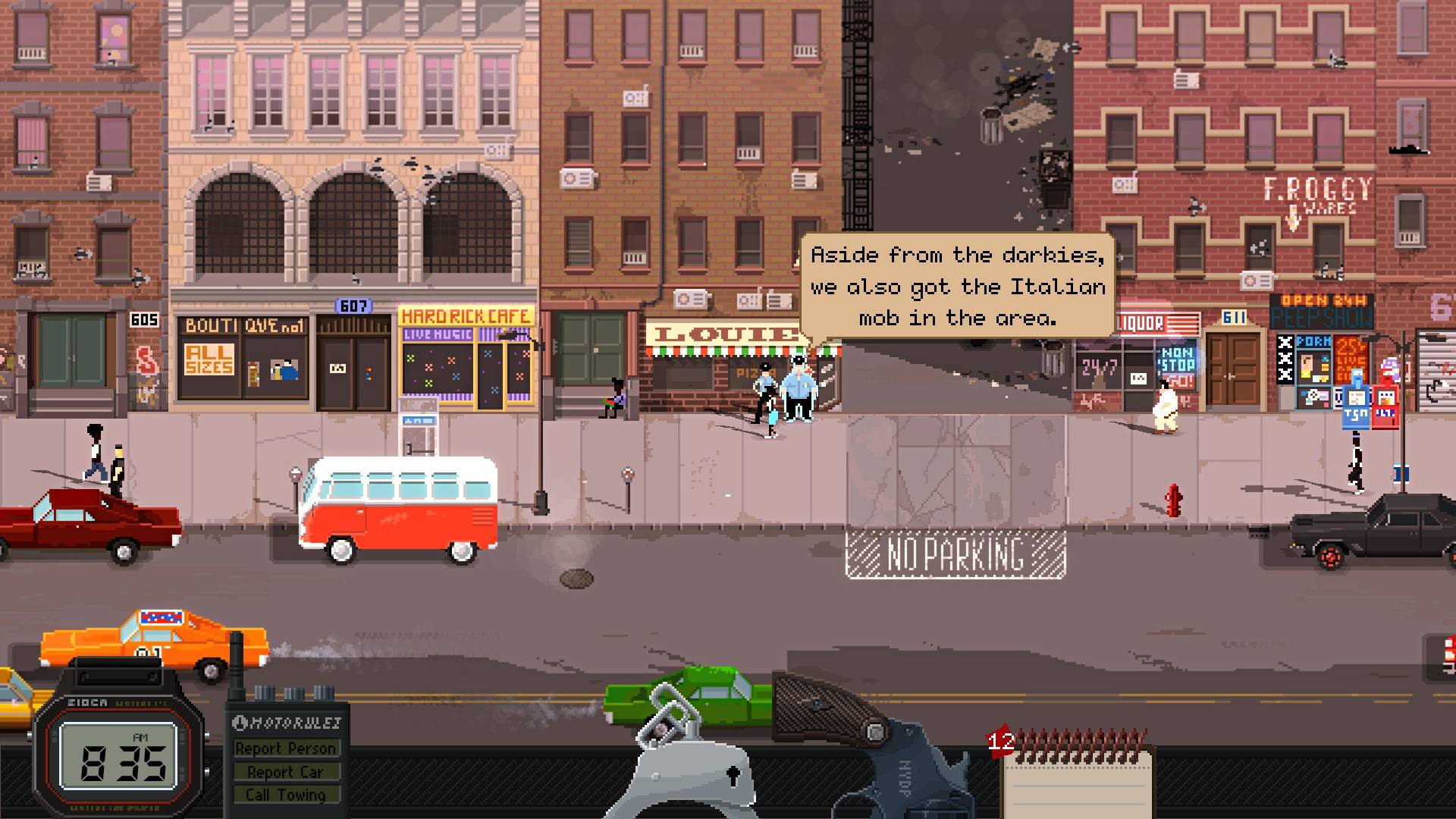 Periodically, though, Beat Cop interrupts you to deal with some exceptional event. How you approach each situation can benefit various factions - police, various criminal organizations, and the people who live on your beat. Will you deliver a questionable "package" for the Italian mobsters, or report it to the cops? Do you let a criminal gang steal car radios, or do you chase them down and return the stolen goods? Each decision affects your standing with each group. Upset the wrong people, and things may end poorly...

There's various other elements to manage as well. Cash is a constant problem, since you've got alimony payments to make. You've also got to make sure you eat, lest your ability to sprint after criminals dwindle.

Related Video Don't have time to read a review between donuts? Check out our video review instead:

Unlike Papers, Please, though, I don't really feel all that pressured. It's possible to meet all your goals on every day I've played, at least with a bit of practice and foresight.

Decisions also lack a certain weight - in some situations, you're a bad, corrupt, violent cop no matter what you do. In other situations, the ramifications of your actions are terribly trivial or basically nonexistent. 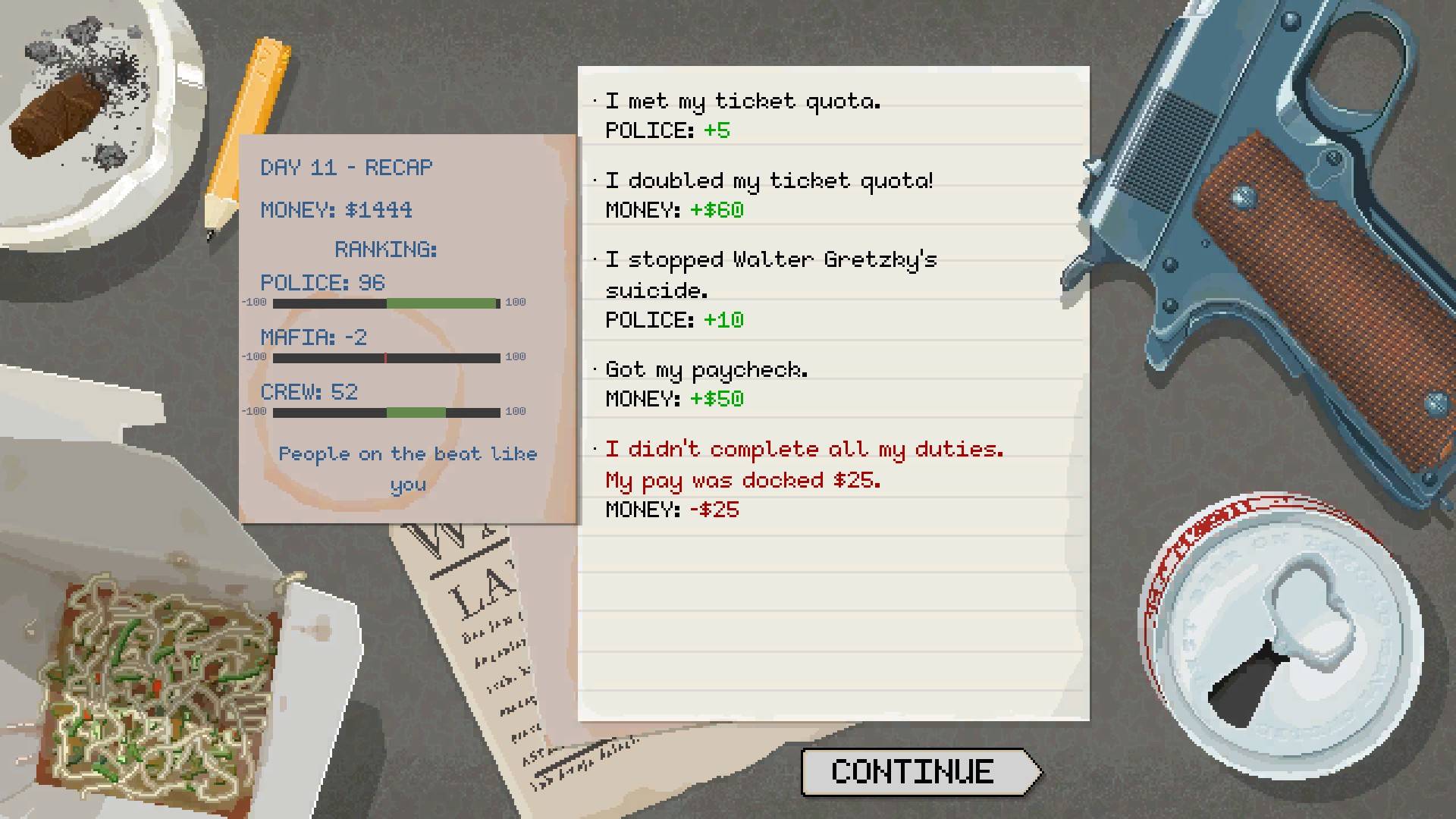 Papers, Please managed to humanize the people in the game, even as it slowly trained you to dehumanize them in favor of saving yourself. Beat Cop just kind of wants to put some caricatures up and see if you're interested in giggling at some juvenile humor. 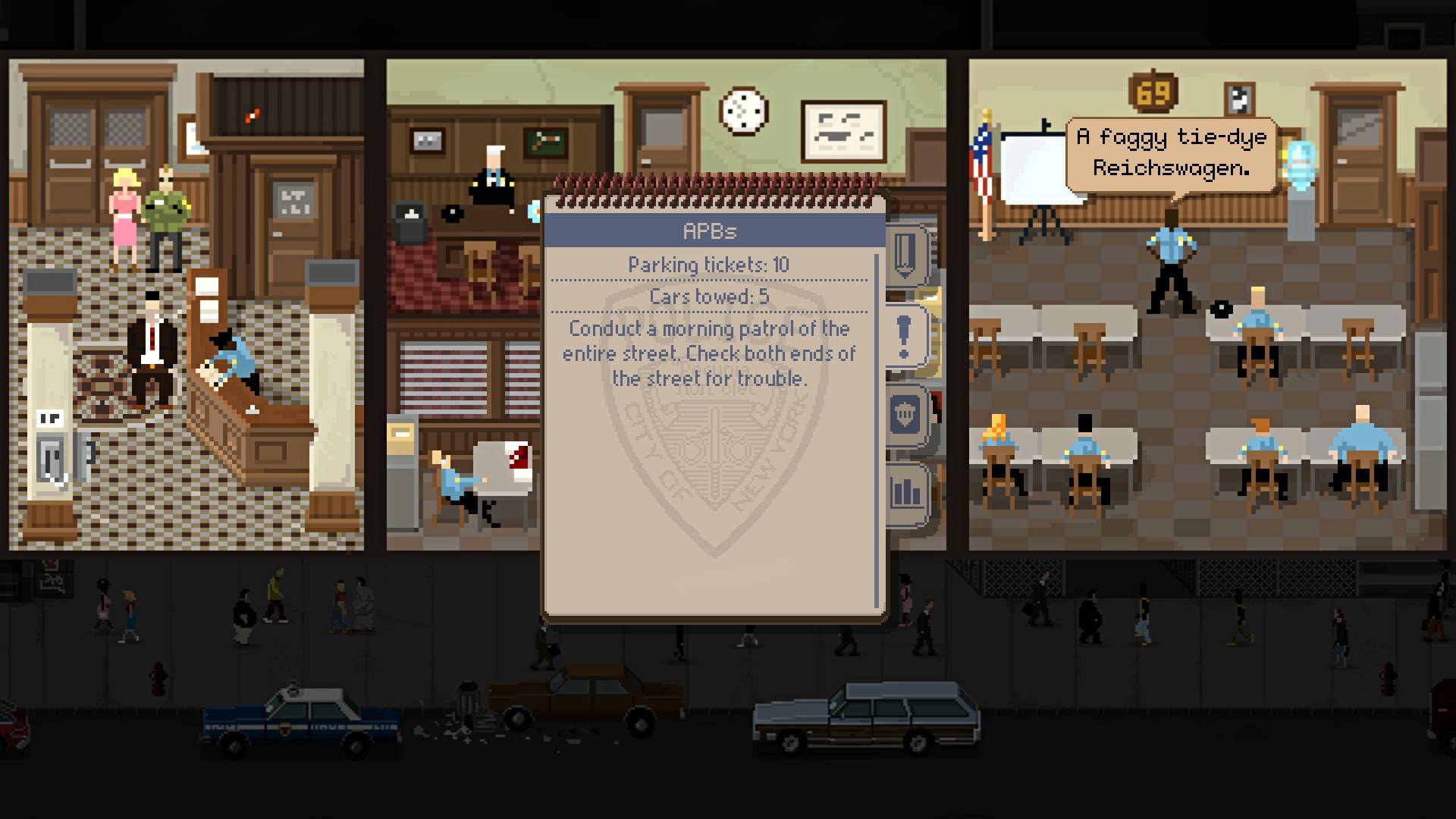 On the subject of tone, Beat Cop's tone is... a disaster. I grew up in the 80's, and I don't think I've ever heard people use the kind of racial slurs that this game throws around on a regular basis. It rarely goes full-on "n-word", but it comes damn close every few lines of dialog. There's also a lot of humor that maybe works in a high school locker room, but doesn't really evoke "80's" or "police drama."

The main plot in Beat Cop follows a disgraced detective framed for a murder and theft at a wealthy senator's home. After being busted down to traffic enforcement, the framing seems like just the tip of the bad luck iceberg.

While this story could be interesting, it's so sparse and jumbled that it's hard to follow, let alone remain interested in. Days will pass without any sort of advancement in the plot, then there's a few lines of conversation about it, and then it's forgotten again for a few more days of relatively monotonous traffic cop action.

Related Video If you're stuck on some aspect of Beat Cop and need help, check out our 7 tips video:

Beat Cop also isn't the greatest at making your objectives clear. There have been multiple occasions where I was given a task and had no idea what I was supposed to do in order to clear it. Compounding this is the rate at which new tasks are given. Sometimes I completely forgot essential elements like where to go or who to talk to. The notebook ought to capture these, but often times the descriptions were lacking.

Oh, and the bugs. My goodness. Sometimes, objectives don't work properly, or graphical glitches obscure bits of the game. Nothing on the order of game crashes or save file corruption, but there were a lot of frustrating moments where something seemed like it should have worked but just refused to. At times I've ragequit over a bug causing me to fail some key part of the day's mission, which meant I'd have to start the day over.