Automata Empire first popped up on our radar after a most unlikely demo - we saw it at an afterparty during PAX South 2016. It took home our Pleasant Surprise award at the con for popping up out of nowhere and stealing our hearts. Automata Empire released last April, but somehow we lost track of it until we bumped into Nonadecimal Creative again in an unlikely place - the Black Ice booth at PAX South 2017! We're not letting this one get away again - let's nail down these little fuzzy monsters before they head off in a random direction. It's time for our Automata Empire review!

Related Video Over on YouTube, WOTS went into some basic strategies for playing Automata Empire, check out the replay:

Automata Empire is clearly a real-time strategy game, although it differs significantly from just about every other RTS I've ever played. Instead of controlling units, you only control where structures are built. The units themselves (monsters, they're termed) wander aimlessly around the map unless otherwise directed. Depending on how many monsters inhabit the same tile, their behavior changes. Some groups wander randomly, others chase enemies, but the really interesting groups are the ones that can't quite keep it together. 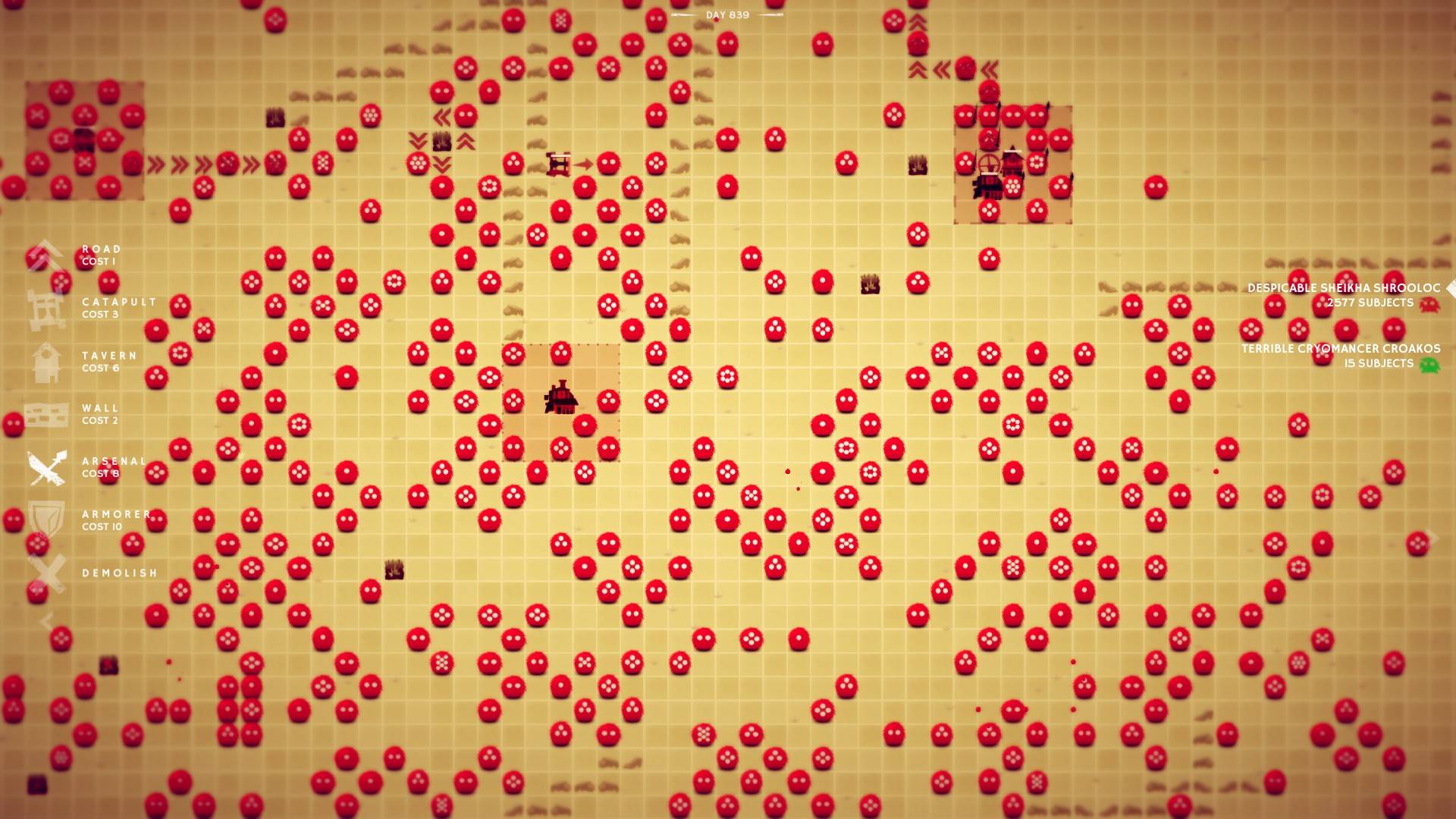 If there are too many monsters in one tile, they will try to split. This splitting causes the group to break into four smaller groups, but when they split their numbers increase. The monsters are both your only resource and the backbone of your army. Thus, the trick to growing your army in Automata Empire is establishing a solid monster breeding program. But beware - if the monsters are too dense in an area, they will spontaneously evaporate! 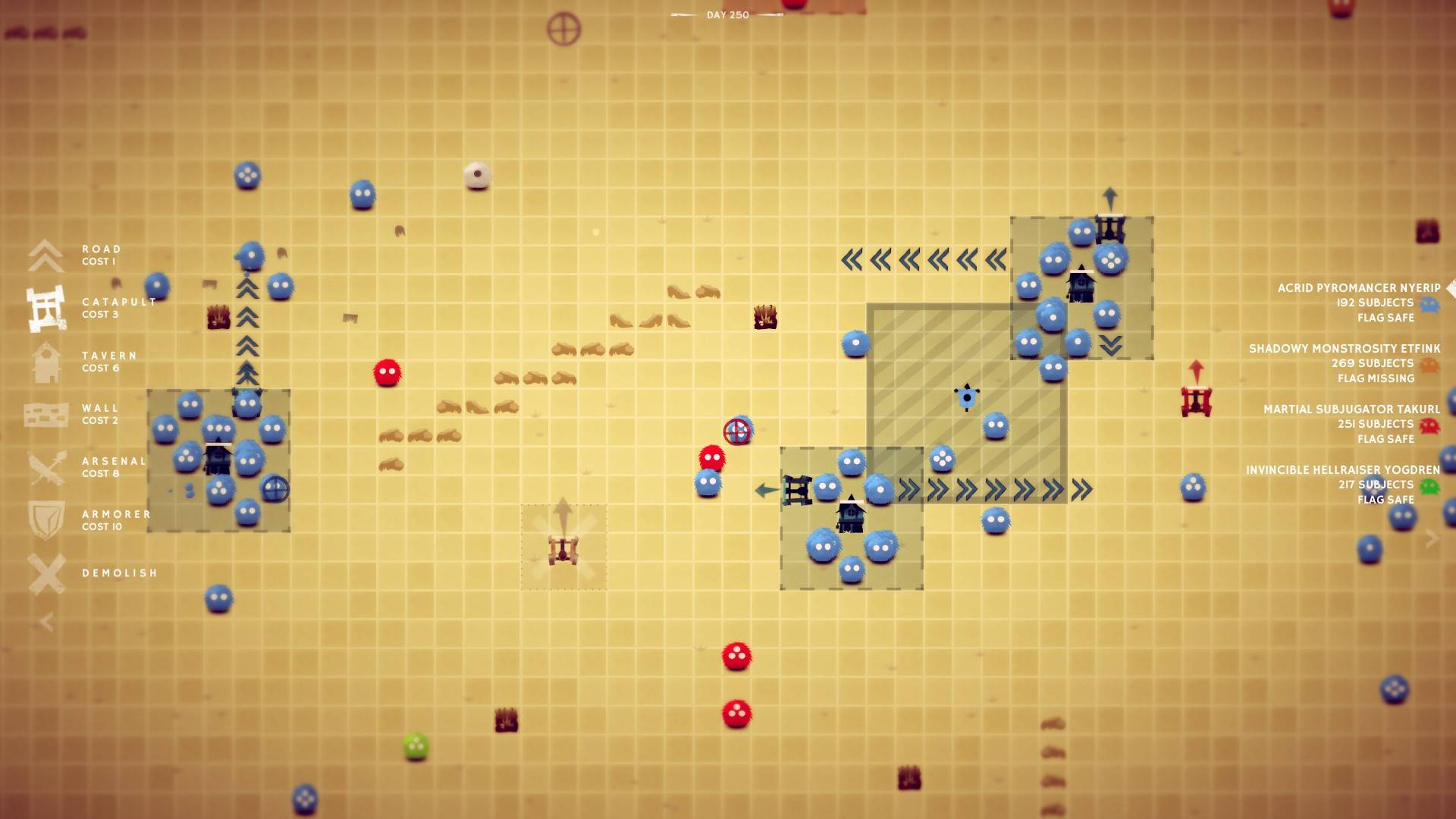 Various structures can be built on the map, each with its own monster-harnessing purpose. Roads and catapults move monsters from one area to another, while walls and taverns keep them together and foster more opportunities to grow their numbers. You can equip your monsters to fight with both spears and shields, which increases their lethality and survivability in combat.

Most of the game modes pit your monsters against enemy monster teams in objective-based combat. There's a simple "kill all the enemies" mode, plus capture the flag (an interesting problem when you can't directly control your units), base defense, and a sort of "last mand standing" zombie survival mode. 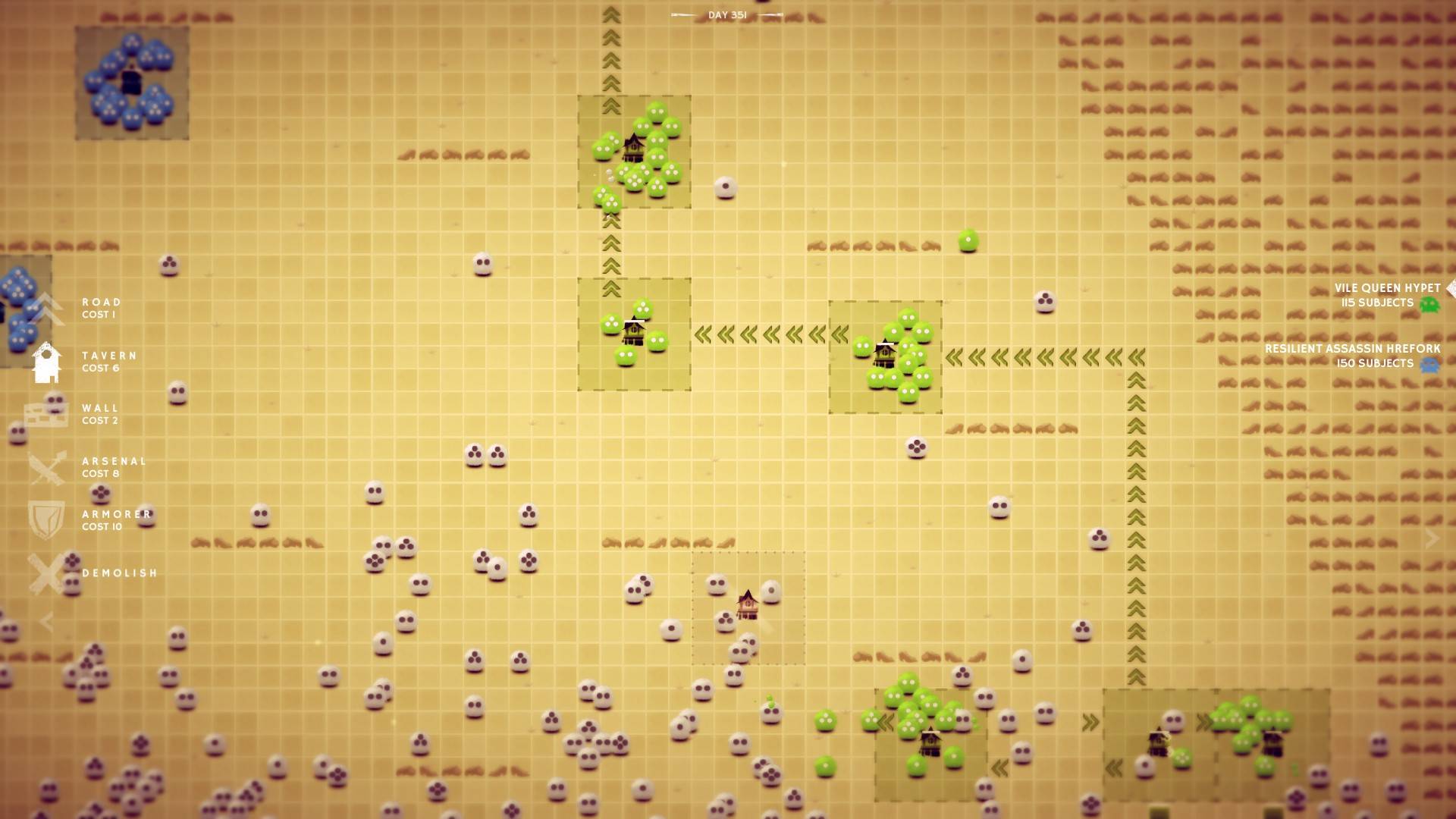 Automata Empire is a game all about patterns, and those patterns can be quite hypnotic. The monsters dance and spin around the map, splitting and joining and colliding with enemies. With little to no micromanagement to speak of, the game is all about long term strategy instead of blazing fast actions-per-minute.

The random elements of the game kind of undercut the strategy, however. Just when you think you've figured out the patterns, something unexpected happens that can throw off your careful planning. The occasional monkey wrench wouldn't be a bad thing, but sometimes a whole colony of monsters just collapses and there's not a real reason why.