Another year, another Assassin's Creed game. These open-world stealth adventures have been a yearly staple for what feels like forever. After a disastrous, buggy outing for 2014's Unity, Ubisoft sought to rebuild trust in the franchise with 2015's Syndicate. Does it rise to the heights of Black Flag, or does it scrape the bottom of the barrel like Assassin's Creed 3? Read on to find out more about Assassin's Creed: Syndicate in my review!

Note: I did not play Unity, so when I talk about new features in Syndicate, they may have been features of Unity. I do apologize for any confusion.

Assassin's Creed is an easy franchise to get a feel for. It's basically a mix of stealth and stabbing. Sometimes you stealth up to something, and then you stab it. Other times, you stab it and then stealth away afterwards. More complex missions - stay with me here - feature stealth, then stabbing, then more stealth. (God help us all if you have to stab more things after that.) 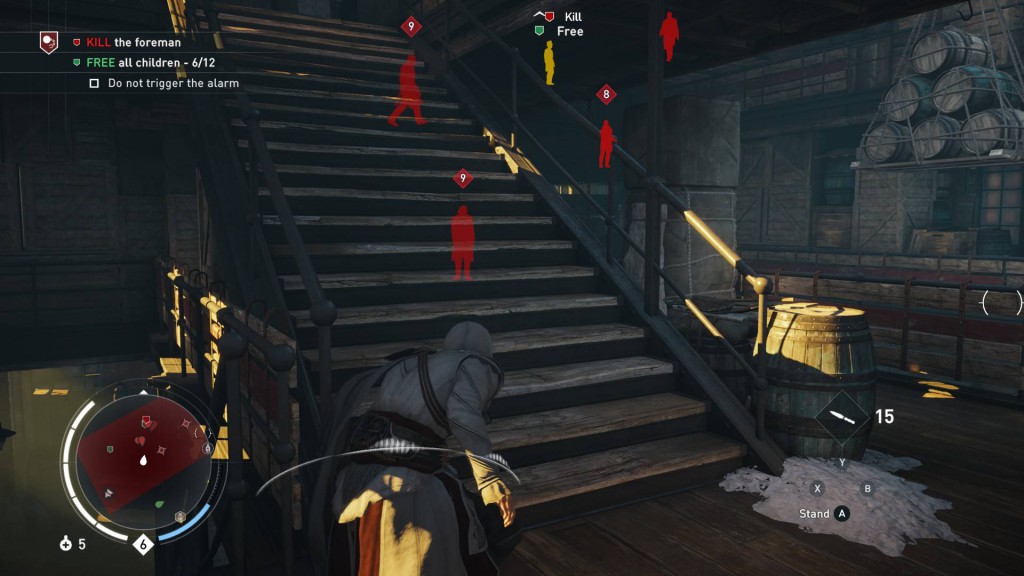 Sure, there's other aspects, like gadgets and climbing stuff. Rest assured that Assassin's Creed: Syndicate features a bunch of gadgets that you really won't use that much. The throwing knives are pretty much a one-hit kill from stealth, so why use a gun? Occasionally, groups of enemies can be dispatched quicker with a bomb of some type, or perhaps a poison dart. Most of the time, though, it was the hidden blade or my trusty supply of throwing knives.

Before I got side tracked with gadgets, I also mentioned climbing stuff. Free running up buildings and across rooftops has always been a key aspect of the Assassin's Creed franchise. Assassin's Creed: Syndicate adds in a new variable - a Batman: Arkham-style grappling hook that can take you up to the top of a building in one quick motion, or form a temporary bridge between rooftops. 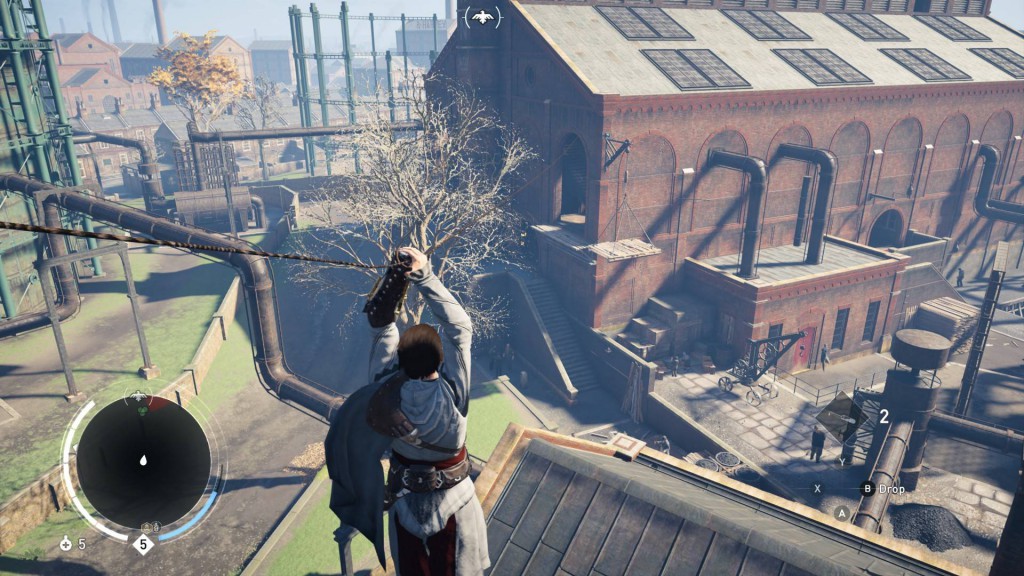 The grappling hook takes almost all of the free running and climbing out of the game. This cuts both ways for me - on one hand, fluid, free-running traversal has always been a trademark of Assassin's Creed, and taking it away feels like losing a limb. Being able to air-assassinate almost anything anywhere feels pretty overpowered.

On the other hand, as we move into larger cities and more modern eras, the climbing is just getting in the way of playing the game. Back when one and two story buildings were the norm, getting a high vantage point only took a few seconds. In Victorian-era London, however, it's a major pain in the butt.

Having removed such a key element to the Assassin's Creed formula leaves Syndicate grasping at any possible improvements that could be made to make the game's movement stay interesting.

One of these is the addition of a "stealth mode" that is toggled on and off. When in stealth mode, you make less noise, can hide behind half-height walls, and you get a HUD indicator that gives away the location of nearby enemies. I don't really feel passionate about this one way or another - the benefits are pretty minimal, but it's not invasive enough to really annoy me.

Another major change to the motion mechanics in Assasin's Creed: Syndicate is the addition of separate "free run up" and "free run down" button combos. Basically, if you're climbing up, you don't have to worry about your character accidentally climbing down, or jumping off a building when they reach the edge.

The downside to this is readily apparent whenever you want to try to mantle over something, like a fence or a railing. In some cases, this is considered an up, in others it's a down, and in still others you start by free running up and then switch to free running down. I lost track of the number of times I fumbled with the controller trying to figure out whether they wanted me to free run up or free run down as I approached these obstacles.

The streets of Victorian-era London are also bustling with carriages that can be hijacked to get you from point A to point B faster. The series-standard fast travel places and leaps of faith are still present, however. 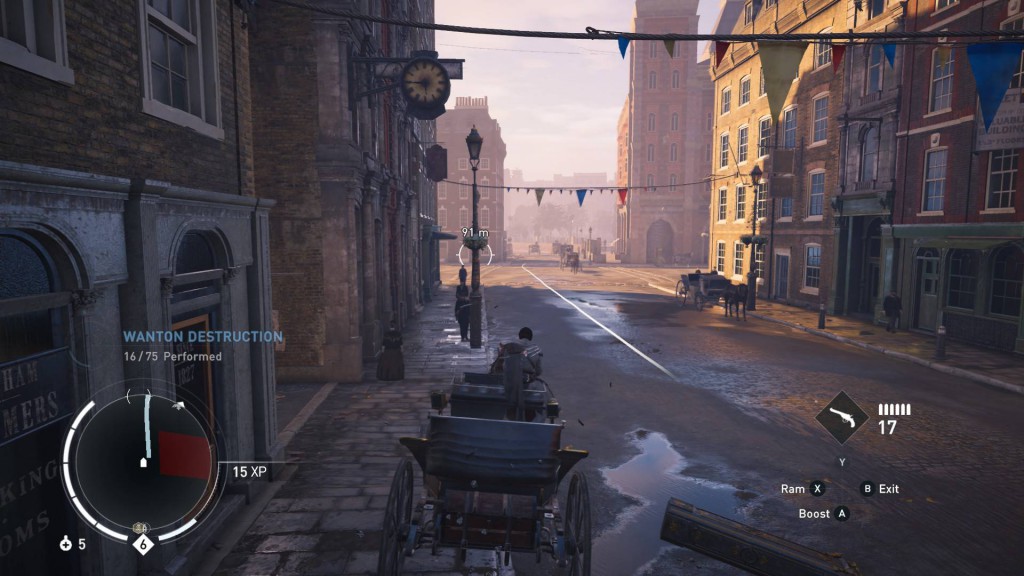 Assassins don't kill civilians. Unless they hit them with their carriage as they drive down the sidewalk. Then it's fine.

While we're on the subject, let's talk about brawling. Combat in previous Assassin's Creed games was very much a "counter-kill" focused exercise. Wait for an enemy to attack, counter, and disarm or stab them. Lather, rinse, repeat. Assassin's Creed: Syndicate attempts to ape games like Batman: Arkham Knight and Shadow of Mordor by adding a more complex, free flowing combat system. 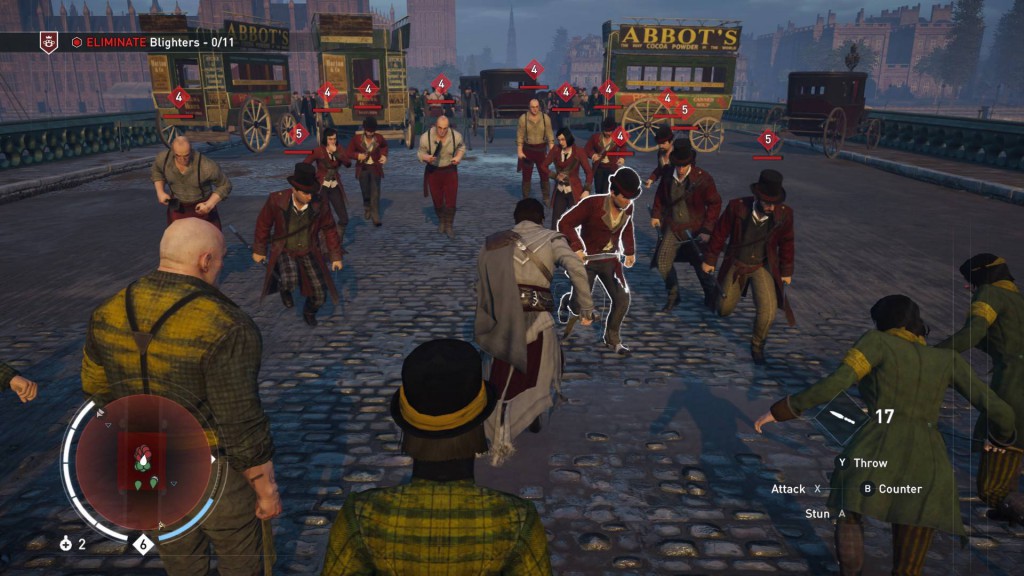 I stab punks like you for breakfast. And lunch. And... you get the idea. I do a lot of stabbing.

The result isn't nearly as polished as the games that it's trying to copy. The brawling isn't terrible, but it does feel very awkward by comparison. It can be challenging if you're going up against enemies at much higher level than you. However, you can always resort to running away and doing the stealth/stab thing instead, which is an instant kill regardless of level differences.

Story-wise, there's nothing much to write home about. Jacob and Evie are somewhat rebellious assassins, but they're good at what they do. They're try to stop the Templars from getting their hands on a crazy powerful artifact. Along the way, they learn to appreciate teamwork. There's also a tacked-on "modern era" story told exclusively through cutscenes that you could skip without missing anything at all.

The big question on everyone's mind is: is Syndicate a buggy mess, like Unity was before it? The answer is a mixed bag. I experience at least one crash to desktop every few hours of play. There's a ton of texture pop-in, even on my high end (brand new $600 Nvidia 980ti card) rig on low settings. I've had a few funky cutscenes where the lip sync was off as well. None of it was a major dealbreaker, (in fact, I've come to expect this sort of nonsense it from AAA releases) but it was still annoying. 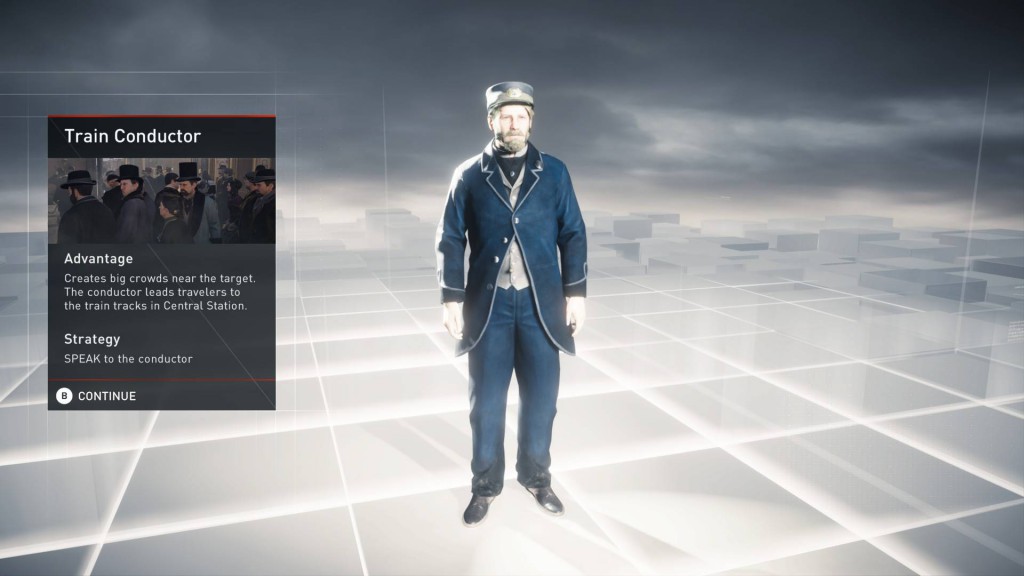 OK, so you're temporarily useful. You get a reprieve from the stabbing. This time...

The silver lining on Assassin's Creed: Syndicate is that it's still fundamentally a fun game. The major assassination missions in particular are varied and clever. There's a ton of Victorian-era London to explore, and it feels real and alive, while still maintaining the sandbox/playground feel. It's also gorgeous - at least when it wants to be... The basic premise of Assassin's Creed still holds up, despite the number of iterations the franchise has gone through without solving any of its core problems.