I've played a lot of Civilization, and I've played a fair bit of Heroes of Might and Magic over the years. Age of Wonders 3 shares a lot of similarities with these two series, and it came with a high recommendation from a friend. I grabbed it during the Steam winter sale, and I'm just now cracking it open and trying to figure it out. Unfortunately, I didn't feel like the first couple of missions taught me well enough to survive, so I've put together this guide to help other players out.

When you first start Age of Wonders 3, the game suggests you do the Elven Court campaign. The first mission of the Elven Court campaign isn't that bad. The game starts by giving you some simple objectives and some starting units that are reasonably suited for the task. The second mission ramps up the difficulty significantly, though. You've got 3 opponents and the first one you meet is allied with another - they'll both declare war on you as soon as you enter their domain. You're outnumbered and outgunned, and the solution isn't particularly clear.

We'll start with some general concepts that the game kind of glosses over, and along the way we'll cover specific strategies for getting past that second mission. Hopefully by the end of the mission, you'll feel like you've learned enough to make smarter choices in the rest of the game.

Gold is king. Really, you're going to need to produce a lot of gold in this game. Your gold is shown at the top of the screen, with your gold per turn next to it. You gain gold from cities, and certain tiles within your borders produce gold per turn as well.

In order to produce every unit you need a lump sum of gold to start production, and then you'll need to spend extra gold per turn in upkeep. This means there's a hard cap to the number of units you can have, and how many you can start production on in any given turn.

Buildings cost lump sum gold but don't require gold per turn in maintenance, unlike many city-building games like Civilization. The lump sum gold is still something of a limiting factor, though. It's very easy to deplete your gold trying to produce units, and slow the growth of your gold reserves from unit upkeep.

Basically, if you had unlimited time, you could build every building in every city. However, in practice the AI moves fast (if not faster) than you, and will probably crush you if you take the time to really max out everything.

Even with a large empire, chances are you're going to have a couple of cities cranking out units while most of the rest are producing merchandise or something similar.

Mana is essential for casting spells, obviously. There's also a concept of "casting points" which represent the amount of mana you can spend per-turn.

Mana is a shared pool among all your heroes. It's shown at the top of the screen next to the gold production. There's a cap to the mana pool, which can be increased by constructing certain buildings and researching certain technologies.

Next to the mana display is the casting points for your leader for the current turn. Keep in mind that each hero has his/her own pool of casting points. Casting points reset every turn, but we're talking about "turns on the strategic map" and not "turns while in battle." If you get a hero into two fights on the same turn, (or if you attack someone and are then attacked yourself) the casting points are not refreshed between them.

The other major resource your empire produces in Age of Wonders 3 is knowledge, represented by a candle. This allows you to unlock spells - both for the strategic and tactical maps. It also allows you to unlock more powerful units and buildings, as well as empire-wide bonuses.

Knowledge production can be boosted by certain buildings like the Laboratory and Observatory, so as the game progresses it's important to build a few of these to keep up with the technology curve.

While you may have several heroes, generally the leader's class determines what technologies you can research. Further, spells that you unlock through research are normally just for the leader. You can level up your other heroes and unlock abilities for them as well, but it's a much slower process and they're generally not nearly as powerful as the leader is.

It seems like the right course of action would be to build up a small empire and prepare your forces for war. Trouble is, the AI moves blindingly fast and will hit you hard if you let it build up.

In the second level especially, the goblin and orc alliance is big and getting bigger faster than you can reasonably keep pace with. They'll eventually start producing powerful units that can obliterate your forces. Compounding this is the fact that a lot of your leader's skills are blight-based, and goblins resist blight to various degrees. 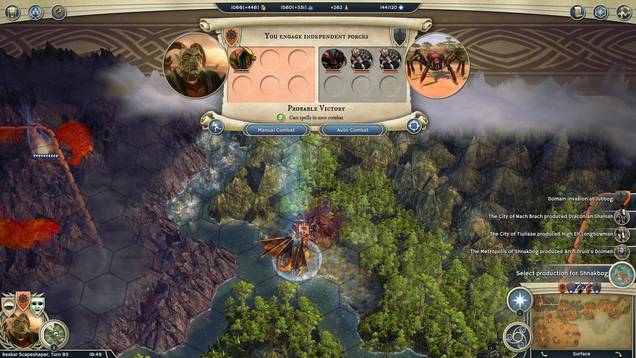 On this level, what you really need to do is force your way west as fast as possible. Don't hole up and try to grow. In the far northwest corner is the dragon village, and going here will net you a free gold dragon. This thing is a badass. It will eat your enemies for lunch. Just this unit and your leader will carry you through quite a few fights against tier 1 and tier 2 armies.

If you upgrade this city a bit, you can train more dragons. Having 3 or more dragons in a fight is just an instant win button. There's really no stopping a dragon army.

Vulnerable Heroes to the Front Line

The campaigns in Age of Wonders 3 usually hand you a leader for your army plus a bunch of other heroes. Usually these heroes must survive the level, or the whole thing is shot. It might be tempting to have these guys hide in the back and never engage the enemy, but I took the opposite tack.

These heroes will auto-revive if they're killed in a fight but you win the battle. Thus, they're more like disposable shock troopers that have special abilities. Since there are certain hero bonuses that only work when the hero is the army leader, sometimes it makes sense to give them their own armies. Multiple armies can take part in a single battle, so you can stack them all into the same fight even if they aren't in the same army. Just make sure they're standing in a hex next to the enemy target when the battle starts, and they'll be included in the fight.

Since units are so limited, and pushing forward is often the only viable strategy, it can be tempting to leave your cities unguarded. Resist this. Even a few weak units guarding every city can help. The AI doesn't seem to like attacking cities that are defended, unless the AI's got a relatively large army. Also, when defending a city you have walls to hide behind, which can be a big benefit to a weaker army.

What's worse is roving bands of independent forces - these guys can also take your cities from you if you're not careful. I've never had them attack a guarded city, but they've engaged small bands of units on occasion.

Bear in mind too that there can be multiple routes around the map. For example, teleporters, caves, and so forth. More of your cities may be on the front lines than it appears at first. I've also had enemies sneak past my border cities and try to hit the cities further in that were not as well guarded.

Often, though, I found that putting pressure on their cities makes them fall back and defend, which leaves them with less of an army to go hit my territories. Hitting them consistently also meant that they weren't able to build up forces as easily. 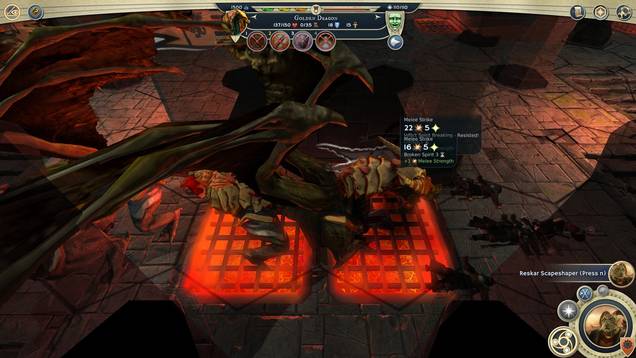 When push comes to shove in Age of Wonders 3, it's time to fight. Here are a few tips for winning tactical battles:

Don't auto-resolve combat. Just don't. It's terrible, your troops will die, you will lose. I only auto-resolve if I know I'm going to lose and I plan to re-load instead of continuing to play. Even if I think I will probably lose, I still fight to take out as many of the enemies as possible.

Don't believe the "probable outcome" the game generates. I've had it tell me I had a very likely chance of failure in a 12v12 matchup and then went on to kill their entire army while losing maybe 2 of my troops. It can be a pretty good indicator of success, but it doesn't take into account a lot of mitigating factors.

Remember your spell restrictions. You can only cast one spell per turn, there is a shared mana pool, and each hero has his/her own spell points per (strategic map) turn. Also note that you can use your leader spells in a fight even if the leader isn't present, but it will cost you double mana.

Try to isolate and focus on specific enemy units. Units do full damage regardless of their hit points. It's smart to try to get a small part of the enemy army away from the rest and gang up on them. Ranged units can plink away at an enemy, and then your melee units go in for the kill.

When laying siege to a city, the AI will sit and defend until you come into range. You can exploit this by staying out of range and moving far to one side of the map or the other. Bunch up your units and focus on the units at the edge of their defensive line. The AI will then spend a couple of turns scrambling to get into position, which gives you time to whittle them down before the reinforcements arrive.