6 Tips to Avoid Raiders in Clash of Clans (Part 2)

Welcome back! This is the second part of my Clash of Clans series on quick tips to keep raiders from taking your stuff. Did you miss part 1? There's still time to start at the beginning!

Most people don't worry about their collectors. They're going to get hit, and that's a fact. You're generally better off protecting your storages. Most of your loot is going to be there, right?

This is true for elixir and gold, but not for Dark Elixir. At TH10, if someone destroys your DE storage, they only get 4% of the contents. In fact, (as of this writing) in a maxed out TH10 base, with collectors and storages full, the Dark Elixir storage will give 3,000 DE if fully destroyed. Meanwhile, the three full drills you get at TH10 can give 1,350 DE each - 75% of whatever is inside them - for a total of 4,050 DE. 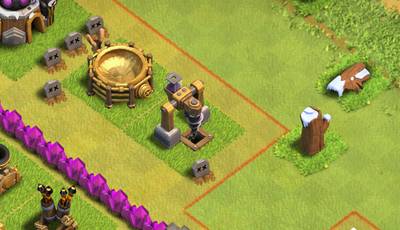 Basically, raiders are much better off hitting bases with full drills that are poorly protected than going after your DE storage. So many people leave their drills outside their walls or in an underdefended location - it's insane.

It used to be that if your Town Hall was destroyed, the enemy would get an instant 1-star victory, and you'd get a 12-hour shield. It no longer works like that. Well, the enemy still gets a free victory - meaning they're taking your trophies. Plus, the Town Hall now has way more resources than it used to, which means you're losing more loot. Finally, you don't get a shield for this! Shields only pop at certain destruction and troop deployment milestones.

If you used to run a "farming base" and leave your Town Hall completely undefended, change your base! If you're in a pinch, swap to your War Base, which hopefully contains a more secure location for your Town Hall. If not, try to rearrange your internal structure to make room for the Town Hall.

Now that shields depend on how much of the enemy army was deployed, strategic base design is more important than ever! Destruction percentages and troop deployment cause shields to form, so you want to make sure you get every last troop dropped and as much of your base trashed as you can each time you're attacked.

This means that you should be putting more "stuff" between your attackers and your storages, especially. Nothing sucks worse than getting raided for all you're worth and still not getting a shield to show for it. Don't arrange your buildings in the far corners, or line them up in areas where they'll be ignored. Put as much of this stuff as you can between your defenses and the area where troops can be dropped.

Also, since trap reload costs have gone down, it makes more sense to put traps further out in the outer rings of your defenses. Clustering them all towards the center is going to make it more likely that attackers can breach your storages without having to drop as many troops.