# # 5: Getting the drop on your opponent

Once you get enough into Marvel Puzzle Quest that you have a set of heroes with their abilities unlocked and powered up, the game shifts away from being solely about matching tiles to do damage. Past this early stage of the game, most fights boil down into a rush to see who can charge their abilities first. My # 5 quick tip for Marvel Puzzle Quest is about maximizing each and every move to generate the most AP.

With some hero teams, the game is over (or at least very nearly so) once certain abilities charge. Thus, the first half dozen turns or so are absolutely critical. How much AP you generate (and of what kinds) can make you win or lose. Boosts help here, by giving you an edge right from the start. However, you also always get the first turn to yourself, which is a major advantage in and of itself.

When the level first loads, check out the balance of the tiles on the board. Try to figure out which of your team's abilities you're charging first. Then, look for matches that give you as much of that AP as possible. 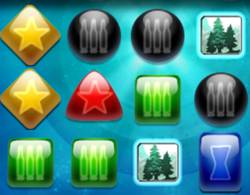 It also helps to look at the board and see what tiles will move when you make your match. When you get the hang of the "physics" of the game, you'll start to see patterns. For instance, matching a horizontal three-in-a-row is an easy way to "drop" tiles that can cascade into further matches.

Whenever you see a three in a row match that can be "dropped" to clear it, try to find a match lower on the board that will drop it into the correct position. That way, you're getting at least double AP out of your turn.

Since the starting tiles are random, chances are that sometimes you're not going to be able to charge your favorite hero abilities easily. Thus, it helps to have a backup plan. The best thing you can do is have several ways you can earn early power-moves.

This is going to require that you can make use of most, if not all, colors of AP. As heroes can have at most 3 of the 6 colors of AP for their abilities (and many have only 2 active abilities, if that...) it pays to carefully balance your roster so that you can field teams that can use every color.

This has the secondary benefit of consistent damage when matching - this makes less and less of a difference as you move into 2- and 3- star teams, where the HP counts are high enough that base tile damage isn't super significant. Still, it's a welcome benefit.

# # 3 Aim for their squishy bits, and protect your own!

In Marvel Puzzle Quest, some heroes are just naturally squishier than others. Managing targets for both teams is an important part of Marvel Puzzle Quest strategy. There isn't a "defense" stat, really (aside from protection tiles, but you get my drift). Each hero has a different amount of hit points per level. A lot of the more powerful heroes in Marvel Puzzle Quest are glass cannons - they can dish out very helpful or powerful skills, but can't take direct punishment for very long.

Nuke these guys first, and in the meantime try to play defensively to deny their abilities. Since these guys tend to have low HP, they go down fast and deny the enemy team the chance to use their most powerful abilities. I tend to define these "squishy" heroes as:

The specific hero to target depends on the context. Sometimes I'll pick a normally non-threatening hero because of the environment. For example, heroes with powerful Green moves are deadly in the Desert.

# # 2: Stockpiling for fun and profit

Marvel Puzzle Quest tip # 2 deals with how you should spend your ISO-8, Hero Points, and what to do with Covers. When it comes to several resources that the game doles out, there's significant advantages to leaving this stuff lying around, unused.

Most of the events are divided into brackets. If you win a lot in a player-vs-player event, chances are you're going to be moved up to a harder bracket the next time an event rolls around. Similarly, in the player-vs-CPU events, the more you win, the higher the levels of the enemies you have to fight against.

However, not all fights are created equal. It pays to pick your battles. I mean this in several ways: